It’s good to have land. And who could agree with that sentiment more than Gordon and Jill Dyal, who own a whole ranch’s worth in Montana, not far, in fact, from where David Letterman has his Deep Creek Ranch.

Mr. Dyal, the co-chairman of Goldman Sachs’ investment banking division, and his wife, who also worked for years at the bank as senior vice president, have recently relinquished a more local portion of their holdings, however, selling for $17.45 million a condo at 521 Park Avenue, according to city records. We suspect that the buyer, Lili Kalimian, is herself no great stranger to property acquisition—unless, of course, she has no relation to the real estate magnate Albert Kalimian. Regardless, this is no starter apartment.

A floor-through six stories up, the apartment sprawls 4,500 square feet and is appointed in photos—courtesy of Richard Ferrari and Drew Glick at Brown Harris Stevens, who had the listing—with zoological decor befitting the Dyals’ membership in the Wildlife Conservation Society: bear statuary and a portrait of birds in flight, zebra print and a ram’s head. (The contribution of the latter to conservation is not entirely clear.) The aforementioned critters will, of course, soon be hoofing it with the apartment’s former owners. But the place itself offers a great deal to even those unenthusiastic about taxidermy.

Subjected to a comprehensive overhaul in 2010, the condo has 80 feet of Park Avenue frontage. Entrants proceed from a private elevator—there’s no one else on the floor, after all—through a 35-foot-long, limestone-paneled gallery to the unit’s interior, which includes a richly paneled game room with coffered wood ceilings that looks like a suitable place for a Scotch or three with The Most Interesting Man in the World. But if it’s the living room you’re after, you can take any one of three sets of mahogany French doors that open on the room.

There are three bedrooms, a gym and staff quarters. The kitchen and breakfast nook look a bit snug compared with the gracious dimensions of the rest of the condo, but they’re certainly suitable for folks who don’t do much in the way of their own cooking. And besides, it’s unlikely that Ms. Kalimian will require nearly as much storage space for buffalo steaks as Mr. and Ms. Dyal. 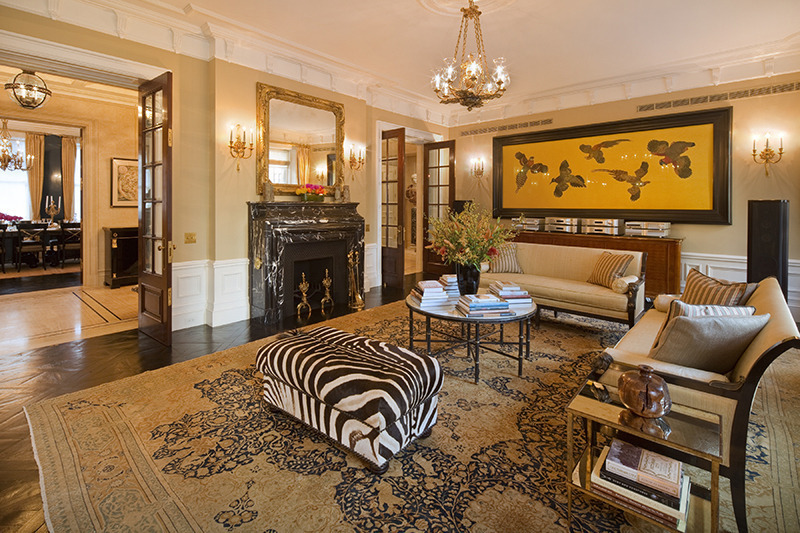