Republican Staten Island Congressman Michael Grimm lashed out at six Democratic colleagues who called for United States Attorney General Eric Holder to launch a federal investigation into the homicide of Eric Garner–which has so far been in the hands of the borough’s GOP District Attorney Daniel Donovan.

Just hours after Congressmen Hakeem Jeffries and Gregory Meeks–who wrote a missive to Mr. Holder along with Congressmen Charles Rangel and Jose Serrano, and Congresswomen Yvette Clarke and Nydia Velazquez–argued that Mr. Donovan’s institutional relationship with the police department compromises his ability to investigate the officers involved in Mr. Garner’s death, Mr. Grimm responded with a sharp defense of his fellow Republican and Staten Islander.

The controversial representative cast the Democrats’ request as a partisan attack on Mr. Donovan’s integrity.

“I am disappointed that my colleagues in Congress are casting a vote of no-confidence in a baseless, political attempt to undermine the authority, competence, professionalism, and demonstrated expertise of District Attorney Donovan,” Mr. Grimm said in a statement to the Observer.

Mr. Grimm–New York City’s sole Republican representative in the House–went on to argue that the request from the six members of Congress constituted an attack on the Staten Island electorate itself.

“The people of Staten Island voted for Mr. Donovan, and for more than a decade have unequivocally put their trust in his judgment. For outsiders to arbitrarily determine that this is insufficient in their view is an insult to the people who live here, our district attorney, and the justice system as whole,” said Mr. Grimm. “If my colleagues in Congress don’t have confidence in their county district attorneys, that’s for them to address, but they should know that here on Staten Island we have the utmost confidence in ours.”

While Mr. Jeffries argued that all district attorneys have an institutional relationship with police that could make prosecuting them difficult, district attorneys in the city frequently investigate cops without being met with calls for federal intervention — such as Bronx’s Democratic District Attorney Robert Johnson’s investigation into the police department‘s ticket-fixing scandal in 2012. Still, several cases involved deaths at the hands of the police have eventually wound up under the purview of federal prosecutors.

Mr. Grimm is up for re-election this year, but faces a 20-count federal indictment for allegedly hiring illegal immigrants at a Manhattan restaurant he owned before holding office.

Mr. Meeks is also currently under investigation for his involvement in a Queens non-profit–also tied to indicted State Senator Malcolm Smith–that allegedly defrauded its workers while throwing extravagant parties for its founder and chief executive officer. Mr. Meeks and Mr. Grimm are known to be friends.

None of the six Democrats responded to requests for comment.

Mr. Grimm is not the first Staten Island elected official to come to Mr. Donovan’s defense. Councilman Vincent Ignizio, the Republican minority leader, penned an editorial in the New York Post saying the case should be left in Mr. Donovan’s hands — and pointing to race as the motivating factor for those arguing otherwise. Mr. Donovan is white.

“Last week, the Rev. Al Sharpton took Police Commissioner William Bratton to task for suggesting that race was not a factor in the Eric Garner incident,” Mr. Ignizio wrote in the Post. “Yet one has to ask if race is a factor in Sharpton and others’ attempts to remove this case from its rightful jurisdiction. Because I can’t find any other justification for taking it out of the hands of Staten Island DA Daniel Donovan.” 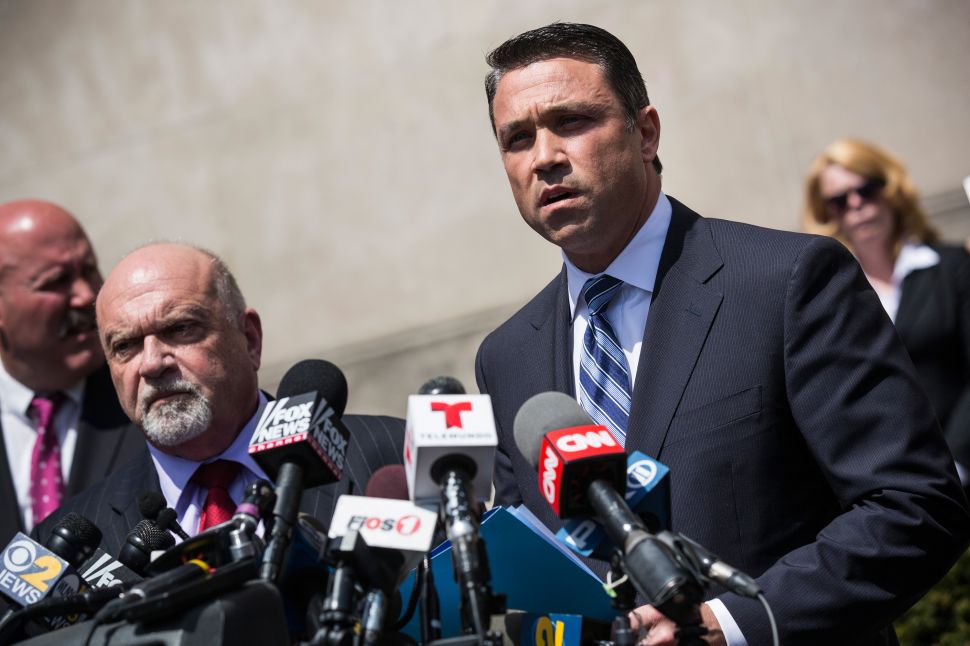