“It was a bright cold day in April, and the clocks were striking thirteen” wrote a near-death, tortured George Orwell, plagued by angst and isolation on a remote farm in Scotland while he raced desperately to complete what would become the definitive work of the 21st century. Selling millions of copies worldwide and translated to over 60 languages, the trans formative dystopian novel “1984” is still an urgent and contemporary look at society’s forever looming idea of Big Brother and the shadow such an entity nefariously casts on the common citizen. The idea of ‘Big Brother’, or ‘Big Blue’, the widely accepted moniker used to describe technology overlord IBM, is used by Apple founder and visionary Steve Jobs to create his own incarnation of “1984” in the form of a ground-breaking commercial that introduces the Macintosh computer to an intrigued and almost bewildered world. He did so against the recommendations of Apple’s board of directors who felt the envisioned ad would reflect poorly on the company because of it’s seeming condemnation of IBM, whom had 98 percent of the market share worldwide. Steve Jobs stood by the Ad until the end and not only made an impact on the home PC market with the eventual release of the Apple Macintosh but essentially changed tent-pole advertising (especially for the Superbowl) forever. This brings us to an alternate “1984” where this dystopian idea is concentrated on the struggles of the men who dare to brave the bleeding edge of tech pioneering against the desolate backdrop of the Silicon Prairie, the season-long setting for Halt and Catch Fire.

In Halt’s alternate universe we are brought to the offices of Cardiff Electric, the barely standing Tech company which will be now run by our pair of sketchy Anti-Heroes, Joe Macmillan and Gordon Clarke, who have made a deal with the company’s owner for an 8 percent share of the company. Macmillan has taken John Bosworth’s corner office after he sacrificed himself on the alter of progress for Cardiff’s PC team and for the now-missing Cameron Howe. We see Macmillan with the same expression that ended last weeks episode, an uncomfortable mix of wonder, confusion and disillusionment while him and Clarke watch the Ridley Scott-directed Big Brother Macintosh ad. Their reactions are typical to what we can expect from the two; loose excitement and inspiration from Macmillan, and doubtfully grounded pragmatism from Clarke. Their reactions reflect what there personal needs are as well as their methods for meeting them.

Macmillan instantly becomes dissatisfied with the completed Cardiff Giant and proposes delaying it’s release to make outlandish upgrades with no real substantial ideas behind them. It almost seems like someone hit the reset button on his brain bringing him right back to the beginning of the season. It was a tragic moment if you grew to like and sympathize with his characters internal conflict and demons. The most cringe worthy being a 5-second closeup of Macmillian as he discovers there was a major flaw in one of the tester machines, an excuse he can use to delay release and carry out his new plan. He stands there with an eery manic smile that screams “mental breakdown on the horizon.” Gordon Clarke has a family and a marriage to save from the breaking-even lives of their barely middle class lifestyle. He needs to make something of himself to permanently suppress Donna Clarke’s need for infidelity. After the deal is finalized and Macmillan surrenders, the duo ultimately decide that the Giant will hit shelves as planned and Gordon buys a brand new sports car. It seemed refreshing at first to see Gordon stable and finally winning in his constant conflict with Macmillan. We see him waiting for his wife outside of Texas Instruments after she helps the company fire her. Their marriage seems to be renewed with levity and a returning mutual respect especially when Gordon presents her with the previously mentioned custom diamond decoder ring.

There was a contained story in this episode for Cameron Howe, Cardiff’s former in-house visionary. She has since left and has been kicking around a telephone company while using their infrastructure to advance the field of data transference over telephone lines. The idea is introduced the when we hear that piercing but nostalgic dial-up sound signals a modem connection and that most of us old enough to remember associate with the early versions of America Online. In collusion with her former coworker coding monkeys, they test the connection by secretly sending gaming data packets from Cardiff’s computers to Howe’s current office an event that leads to Howe starting her own “garage” company appropriately named “Mutiny”. She steals the entire crop of Cardiff Electric’s coding pool and this is devastating to Joe Macmillan who had previously needed them to write a new program for the Giant. This serves as swift revenge for removing her ahead-of-its-time software from the Giant, a needed sacrifice that made the machine marketable. Macmillan is continually haunted by Howe as he associates her with British actress Anya Major, the woman who tosses the sledgehammer at the screen in Job’s ad. The two bare a striking resemblance and reflects the overall planning and research that went into the conceptualization of the show. It’s sad really. This was all a great payoff if you stuck through the ugliness and moody drama of the show. These allegories and hat tips to actual events and products could have served the show well if they used the more mainstream cultural icons earlier in the season. The writers would have had the salivating word of mouth of the fevered Apple fan base if they had alluded to the company’s progress and development early one while bringing in a younger and pop culture savvy audience to the show.

The events culminate at Cardiff’s ceremony and release party where Gordon Clarke is the star of the show. He’s suited up, clean shaven and in the good graces of his wife Donna. He’s come a long way from his battle with alcoholism and defeatist attitude we suffered through earlier in the season. He’s slowly becoming Joe Macmillan, with his new sports car, his electrifying speech at the party and his smooth backroom renewal of his marriage to Donna. The show runners brilliantly reinforced this through the noticed absence of the Clarke’s children. Joe Macmillan mopes around the party in confusion and isolation. He is the Steve Jobs of this alternate universe — never satisfied with his own progress and whose angst and personal pain follow him into his entrepreneurial pursuits. He’s been beaten down by Howe’s actions not only as a pioneering partner but as his lover. She scolded him into a self realization of where his insecurities come from: his checkered past with his mother. As foreshadowed by the tidbits of his back story and history at IBM and the infamous flooding of his ‘big blue’s’ million dollar data center, Joe Macmillan leaves Cardiff Electric in similar fashion by torching the first full truck of Giants ready for shipment after the party disperses. This fiery purge seems to release at least some of his demons, which move right into possessing Gordon Clarke. Macmillan moves on and we find him hitting the road and venturing into the wild looking for a mysterious women who will undoubtedly be revealed to be his estranged mother. Held up at an isolated Observatory, She may be an astronomer or a scientist and may be where Macmillan gets his wonder and outlandish vision from.

As this ceremony of release is happening for Macmillan, The Clarke’s are brought right back to their soul-crushing realities as they are violently carjacked for their sports car. The essential scene of transformation happens in the Cardiff conference room with Gordon Clarke now at the head. He’s not the same anymore, between the trauma from the violent carjacking, the stripping of his company and the betrayal of Donna turning down his offer to join Cardiff and instead joining Cameron Howe’s start-up. He’s serious, direct and almost menacing. The visual served as a great contrast to Clarke’s first scene in the pilot, huddled and hunched over in his crowded cubical. He interrupts his staff, in celebration of the press release modestly praising the release of the Giant, with the cold and unnerving words, “what is next?” 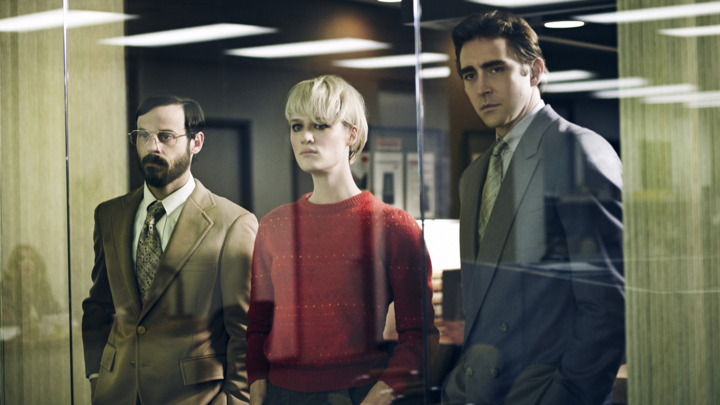