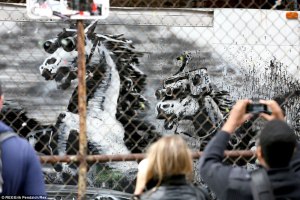 Last year, the super-secretive street artist known as Banksy produced one new work on the streets of New York every day for a month. The painter called it a residency. It even had a name: “Better Out Than In.”

People really cared! They cared so much that the die-hard Manhattan-based Banksy fans all stopped to take pictures and videos of these new masterpieces, and then promptly posted them to Instagram. If you want to relive what it was like to scroll through Instagram in October 2013, you can watch Banksy Does New York, a new documentary about that totally crazy mystery graffiti guy. How does one make a documentary about someone no one has ever seen? (And who may not exist, or could actually just be a collective of artists laughing at us all?)  You string together a bunch of user-generated videos, naturally.

“I crowd-sourced footage that New Yorkers posted online each day of the month,” the director Chris Moukarbel said, as reported by The Hollywood Reporter. “It was about a city holding a mirror back up to the artist.”

There’s already been a pretty high-profile documentary that’s basically all about Banksy, but clearly that one didn’t have enough shaky footage caught by random people on iPhones.