Hundreds of protesters marched up Broadway and shut down Times Square Thursday night, when what was supposed to be a national moment of silence for victims of police brutality held in Union Square Park turned into a protest march, ending in a handful of arrests.

The shooting death of 18-year-old Michael Brown by a St. Louis police officer on Saturday sparked protests in the streets of Ferguson, MO, and reports of police in riot gear using tear gas and rubber bullets on peaceful protesters has caused national outrage. The activist group Anonymous urged cities across the nation, via Twitter, to stage protests in solidarity with the citizens of Ferguson and to protest against police brutality.

In New York especially, the topic of police brutality is still fresh in everyone’s minds following Eric Garner’s death as result from a police chokehold during an arrest in Staten Island last month. A yellow banner that read “Eric Garner to Mike Brown, this has to stop now” was laid on the ground of Union Square Park, where protesters gathered around Revolution Club members.

“Today, we’re having a moment of silence, but we don’t have to be silent,” they shouted. “We’re here today to show the people in Ferguson that they are not alone.”

But the moment of silence never came. Instead, protesters were asked to shout out their personal stories about their interactions with the NYPD in their communities.

“I’m scared of the people who are here to protect and serve me,” a girl called out. “When I leave the house, my parents worry if I’ll come home.”

The crowd moved to speak in front of the police officers that were watching over the protests. Hoarse voices yelled out “No More!” and chanting “No justice! No peace! No racist police!” The Revolution Club then led the group up Broadway.

As the crowd progressed up Broadway, Brooklyn teen Johanan McDowell, 18, ran ahead, holding both hands in the air, and shouted, “Hands up, don’t shoot,” reportedly the last words said by Brown before he was shot to death by a St. Louis police officer. He stopped chanting to look back at the crowd.

“Wow, this is amazing,” Mr. McDowell told the Observer.

When protesters reached 42nd Street, their chants changed to “I can’t breathe,” Garner’s last words before he died. The protesters made their way around police barricades at 42nd and 47th streets, eventually marching across 42nd Street. They were stopped at the corner of 42nd and 9th, where they were met by a stronger barricade of NYPD vans. Officers with batons and flex cuffs kettled the crowd onto the sidewalk, and five arrests were made as the officers tried to peacefully disperse the crowd.

As officers began letting protesters out in small groups, Hells Kitchen resident Quentin Chestnut held his camera phone up, recording video of the officers as he walked out of the kettle. Mr. Chestnut told the Observer that when he found out there was a protest going on down the block, he had to be a part of it.

NMOS14 from emma hernandez on Vimeo. 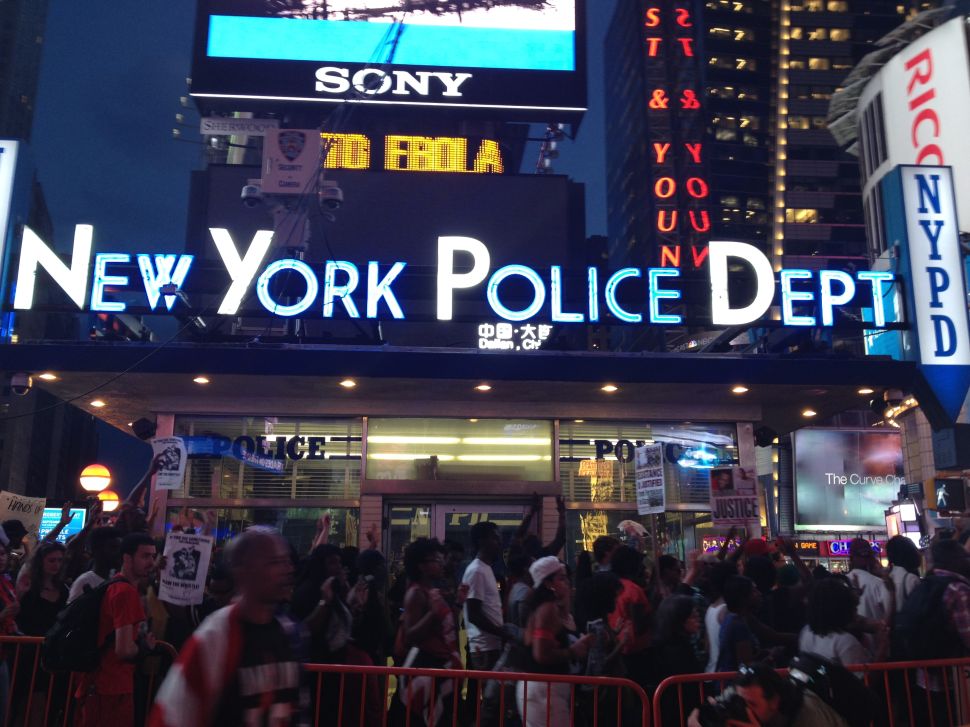