After growing their audience 550 percent last year, Mic landed a $10 million VC investment to try to become the number one spot for millennial-era news sites. Formerly PolicyMic, the company has recently rebranded and redesigned their site, hired star editorial staffers, and is planning new verticals in tech and health.

Trouble is, as popular as Mic is becoming, the business hasn’t yet crossed the threshold into profitability. So today, Mic announced that they’re launching a series of content marketing campaigns aimed at its millennial audience.

“People are willing to share stories that are sponsored if they’re interesting,” Mic CEO Chris Altchek told Betabeat, “We want anything that comes out of a brand partnership to be as good, if not better than what’s coming out of editorial side.”

But the timing isn’t great to get into the content marketing game. Yes, it’s an incredibly lucrative model, but it’s also quickly become lauded as the new great devil in media. John Oliver dedicated an 11-minute segment to dragging native ads through the mud on Last Week Tonight, to the gleeful applause of journalists everywhere:

“We want to have incredibly clear labeling,” Mr. Altchek said. “Where others fall short is when audiences feel like they’re being tricked.”

One of the first example’s of Mic’s native ads is “Two Engineers Have Created the Doll Every Young Girl Should Be Playing With,” an article generously marked at both the top and the bottom as an advertisement for Cole Haan. The fashion label is sponsoring a series of articles on Mic that “spotlights young women who are helping set a new course for our generation.” Cadillac will sponsor a similar series about industry leaders in tech and aviation.

The two series take on two very buzzy trends in digital media: articles about trailblazing feminists, and testimonials from “thought-leaders” in the innovation space. Mr. Altchek says the first post from Cole Haan is over-performing, crediting the strength of the Identities.Mic section, which he calls one of the best teams “in the feminism, LGBT and women’s rights space.”

Unfortunately, having a Mic writer put together advertisements only slightly veiled as journalism might be the best chance Mic has to turn a profit. Banner ads, whether you’ve got great targeting and analytics or not, and becoming less and less profitable, and Mic doesn’t have a premium product or print publication to stand on.

What’s most suspect is that Mic’s sponsored posts appear under a contributer’s byline. At BuzzFeed, sponsored content is “by Old Navy,” or “by Rosetta Stone,” not mixed in with a journalist’s work. Even if Mic is clear about what is journalism and what’s not, this blurs the line of who is a journalist and who is an advertorial copywriter.

But Mr. Altchek is certain that people will accept, click and share the new native ads, as long as the articles themselves are something you’d actually want to read.

Update: Mic has reached out about having their editorial contributors produce branded content. From James Allen, Mic’s Communications and Strategy VP:

The sponsored story referenced by the Observer was produced by a freelance writer who has contributed editorial content to a number of other outlets, including ours. Despite the fact that this individual is not a Mic staff writer or employee, the story was a brand-approved piece of custom content that should have been written by a member of our brand content team or a non-editorial freelancer.

Our first two pieces of branded content meet that standard, but this one did not. As soon as we published the piece, we recognized our mistake. We regret that this happened and we take responsibility for it. Moving forward, all custom content will be created by designated branded content writers, regardless of their status as a Mic employee or freelance contributor. 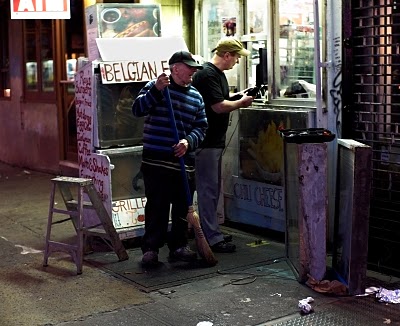