Imagine, if you can, sitting in crisply-pressed linen, sipping a perfectly chilled strawberry mojito wafted to your sidewalk table by a ravishing server, as you listen to the murmur of leaves without even the echo of a car radio or a cranky child’s whine to mar the tranquility… and, while you’re at it, throw in a sumptuous sky display as the evening sun sets over the Hudson River. Now set the whole experience to music by Handel, and you’ve got an approximation of Mark Morris’ staging of Acis and Galatea at Lincoln Center. It’s everything good about summer condensed into two hours.

The opera itself is exquisitely beautiful in its simplicity and sweetness. There’s nothing you could call a plot, more like an incident. Acis loves Galatea, but the jealous monster Polyphemus loves her, too. When Galatea spurns him, Polyphemus hurls a boulder at Acis, killing him. Galatea then magically transforms her dead lover into an eternally flowing river.

This naïve story by Ovid inspired Handel to compose music of quietly intense charm, the most distilled operatic evocation of youth I can think of. (Next to Acis, Puccini’s bohemians sound positively middle-aged.) More than half the work is given over to the lovers’ leisurely rejoicing in their devotion—the final number of the first act is called “Happy we!”—and Acis’ death is handled quickly and discreetly in recitative. Only a brief, dignified mourning chorus intervenes before Galatea works her transformative miracle.

The opera has undergone a number of transformations since it was composed for private performance at an English country estate in 1718. Handel tinkered with the piece repeatedly over the next 25 years, and in 1788 Wolfgang Amadeus Mozart adapted the score for the larger orchestral and choral forces of the late Classical era.

It was this version that played at Lincoln Center’s Mostly Mozart Festival last weekend, and the rich string and woodwind sound of the Philharmonia Baroque Orchestra proved a neat fit for the David H. Koch Theater.

Mr. Morris’ production of the work, not surprisingly, features dancing almost nonstop, but unlike most “opera choreography,” his work never feels applied from without. So organic and fresh are his dances that they seem to have inspired the music, rather than the reverse.

Since Acis is an example of the dramatic form known as the “pastorale,” the piece is all about nature: plains and fields and frolicking animals and youths. Mr. Morris’ dancers portrayed all these things, and, more to the point, the synthesis of all these things. Sometimes they were jolly shepherds, for example, and a moment later they were gamboling sheep, and then, without any abrupt transition, they were nothing immediately identifiable, just an expression of happy, uncomplicated nature.

Though obviously everything was tightly choreographed down to the last flick of the hand, it all looked spontaneous, without any sense of self-consciousness. Without any direct quotations that I could see, Morris alluded to folk dances (hands joined, circling) and court dances of the 18th century, lots of little dotted-rhythm skipping steps and relaxed turns on half-point.

The funniest yet most disturbing number was the group dance to Polyphemus’ aria “O ruddier than the cherry.” As the giant sang of his lust for Galatea, the dancers skipped around him in a wide oval patter, something like a game of musical chairs. From the center of the ring, Polyphemus (bass-baritone Douglas Williams) would reach out and grope a dancer, then lick his fingers, and the “abused” dancer would then collapse in a heap upstage. This sequence was disturbing but not really horrific, because the dancers played it so blithely, with even the final “victim” airily unaware of his impending doom.

More poetic was the depiction of Acis’ death, with one of the smaller dancers playing the boulder, carried hand over hand by the rest of the troupe across the stage to strike down the hero. The action slowed almost to a crawl, with the dancers turning their heads away from the moment of catastrophe.

In so dance-oriented a production it would be easy overlook the singers if they were not so fine as they were here. Mr. Williams took top vocal honors with his handsome take on Polyphemus’ bombastic numbers, and Yulia Van Doren sang Galatea’s songs with easy charm. Of the company’s two tenors, Isaiah Bell as the sidekick Damon had the sweeter tone, but Thomas Cooley’s Acis gave the more incisive performance, turning even the simplest line of recitative into an arresting dramatic moment.

No detail of the evening was out of place, from Adrianne Lobel’s gauzy abstract sets to Isaac Mizrahi’s costumes, flowing chiffon dresses and kilts the color of leaf-dappled sunlight. Everything converged to make Mark Morris’ take on Acis and Galatea a song of summer. 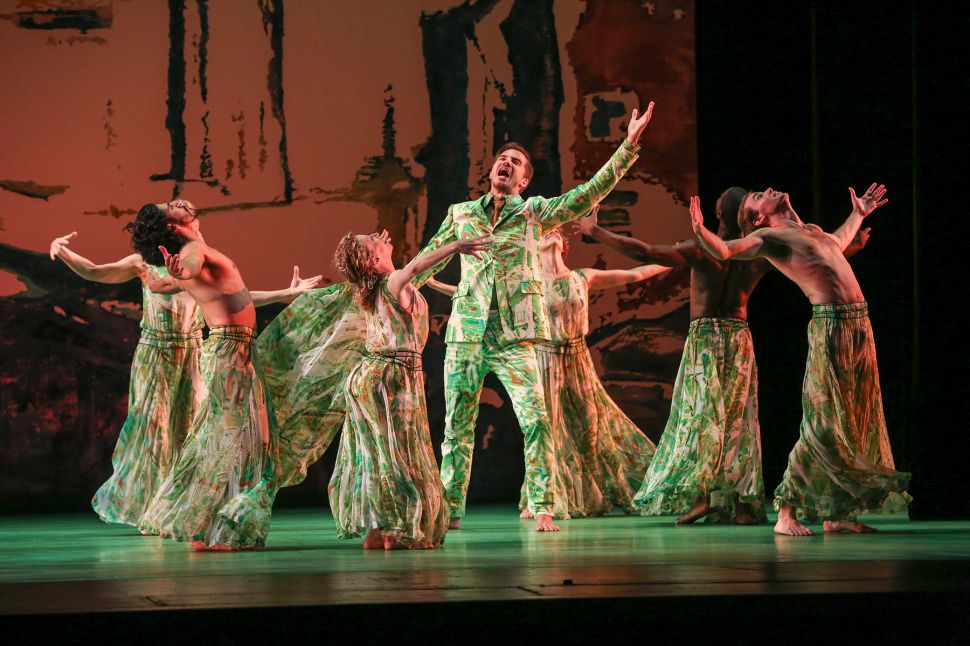