As former Congresswoman Kathy Hochul gathered with a cadre of elected officials at City Hall to tout more than 100,000 petition signatures for a new Women’s Equality Party, her long-shot primary challenger for lieutenant governor, Tim Wu, blasted the party as a “sham.”

That didn’t sit so well with the host of the Women’s Equality Party press conference, former Council Speaker Christine Quinn.

“That’s the same Tim Wu — let’s be clear — that’s the very same Tim Wu who called the women’s suffrage movement a ‘little issue,'” Ms. Quinn said. “So I don’t really have any regard for what Tim Wu has to say about what Kathy Hochul has done for women, when he thinks Susan B. Anthony and Elizabeth Cady Stanton and other women who literally put their lives on the line, that what they did so I could vote and all these women could vote was a ‘little issue.'”

Ms. Quinn was referring to comments Mr. Wu made during a Reddit “Ask Me Anything” event, as reported in The Daily Beast: “Net neutrality is like’s women’s suffrage in the teens or ’20s. It’s its own little issue. In the ’20s, most people didn’t care about women’s issues, except for women’s groups. That’s what it’s like with net neutrality.”

“After he retracts those outrageous statements, after he apologizes to the legacy of Susan B. Anthony, we can hear what he thinks about what Kathy Hochul has done for women,” Ms. Quinn said.

In his statement, Mr. Wu blasted Ms. Hochul for votes to “eliminate breast and cervical cancer screenings for hundreds of thousands of women.” After Ms. Quinn defended her from the podium, reporters also asked Ms. Hochul to respond personally to Mr. Wu’s comments.

“I ask Tim Wu to walk a mile in my shoes — to have a 100-percent pro-choice record in the most Republican district in the state of New York takes a little more than sending out tweets,” she said.

She also said there were times in Congress when Republicans called “set-up votes,” where members might have to vote “against a woman” to vote in favor of an attached issue, like reducing student loan rates.

“So that’s the game they played. It went nowhere, but I will tell you right now, I am so glad to be out of that crazy institution and to have an opportunity to do something meaningful here in the state of New York on behalf of all women,” Ms. Hochul said.

After the rally, Mr. Wu argued Ms. Quinn was being “intellectually dishonest” about his comments, and proceeded to knock her for blocking paid sick leave for several years while in office. “When I compared the issue of net neutrality to women’s suffrage, I was saying the issue started, like women’s suffrage, with a small number of passionate advocates and then grew to become something amazing,” Mr. Wu said in a statement to the Observer.

But a slew of Democrats defended the need for a women’s issues party today, and railed against what they deemed efforts to rein in women’s access to contraceptives or abortion.

Though she was formerly chair of the state’s Democratic Party, Judith Hope urged voters to select their candidates this year on the Women’s Equality line, saying they needed to net 50,000 votes to remain a party.

“Do you understand? If we don’t get 50,000 votes on that line in November, we won’t be a party,” Ms. Hope said, turning to the crowd of Democratic elected officials. “Let me tell you something, you need your own party. I know.”

While they said the ballot line was needed, the elected officials gathered — all of them Democrats —  argued the new party wasn’t an admission that the Democratic party wasn’t doing enough for female voters.

“The Democratic Party is a leader on democratic issues, and on women’s issues, but if you came from the Congressional district that I represented — the most Republican in the state — there are a lot of women who are registered Republicans who do believe in women’s right to choose,” Ms. Hochul told the Observer after the press conference. “And this gives them an opportunity to cast their vote in a statement of those priorities.”

Ms. Quinn, meanwhile, said the Republican and Democratic parties were “very different” when it came to women’s issues — and echoed comments made by Assemblywoman Deborah Glick about the Democratic Assembly twice passing the Women’s Equality Act, which has stalled in the Senate.

“This is about making sure we get the best, strongest most progressive pro-women’s equality candidates we can — Kathy Hochul and Andrew Cuomo — and we get a pro-choice, Democratic Senate.” 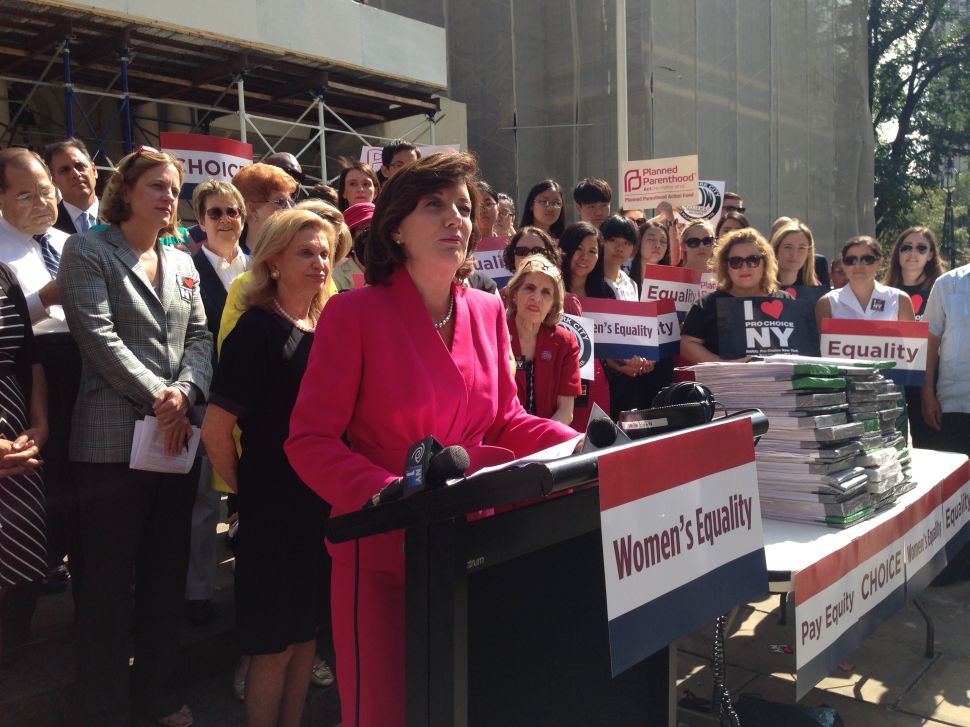