We have left Thailand behind this week, mercifully, and are barely able to take bets on how many more times Kim will think of her almost adopted daughter Pink (I am guessing that the “second kid’s room” she shows her grandmother in this episode is both the first and last) before Kim’s Vogue cover comes up once again. She keeps talking about how she wants to go to “the newsstand” to get it as soon as it comes out, as though she wouldn’t have three billion copies waiting for her in her mailbox. Her sisters respond to the suggestion that they visit the only newsstand in Calabasas at 5am to get copies of a magazine they all are definitely already subscribed to with appropriate disdain. Eventually Kourtney and Khloe feel guilty about how much they don’t care about their sister’s Vogue cover (join the clubbbbb) and they blow it up and frame it, presenting it to Kim as she returns from a business meeting to which she wore a black blazer and no bra — you know, classic business attire. Anyway, she is delighted. The secret to Kim: present her with a photo of herself and all is forgiven.

This week we revive a couple of time-honored Keeping Up With The Kardashians plotlines: the humanization of Kris Jenner, what happens when Scott Disick gets too turnt up, and the apparent family-wide penchant for buying unlivable homes. Kim, Kourtney and Khloe all own homes that they are not able to live in, either because they are unfurnished (Khloe), full of rats (Kourtney) or a pile of rubble awaiting a spell cast by Kanye West that will turn it into a palace, like Frozen but with more Corbusier lamps (Kim). MJ, the girls’ grandmother on their mother’s side, is hanging out this week, and she’s pretty adorable (as are Kris and the other girls, who clearly adore her). Somehow the fact that she was married thrice comes up; her first marriage, she says, was to her high school sweetheart and only lasted 60 days, so she “beat Kim.” MJ for president!

Khloe and Kourtney are getting up to a lot of hijinks in service of decorating Khloe’s new house. Kourtney is obsessed with interior design and has jumped at the chance to take control of furnishing Khloe’s house, because decorating her own palatial estate isn’t enough. Either that or she’s fully ceded control of it to the rats. Even though Kourtney “decorating” Khloe’s house seems to consist mostly of Kourtney presenting vision boards made by Khloe’s actual decorator to her, Khloe thinks she’s doing a great job…at least until Kourtney sends an invoice to her business manager for $25,000 for her decorating services. Hahahahahahahahahaha that is incredible! Khloe thinks it’s a joke at first, but quickly realizes when Kourtney STOPS SPEAKING TO HER that she was completely serious.

Meanwhile, Kris wants to help MJ with some back pain that has been bothering her, and has the brilliant idea to procure her mother some medical marijuana to relieve her pain and increase her appetite (“You need to gain weight, [Rob] needs to lose weight,” Kim says to MJ unnecessarily as they drive to the pile of rocks she will one day live in).

“Could this help me with my neck pain that starts at 5pm every day that I’ve never mentioned before?” Kris wonders. Yes, the porndoctor assures her. It sure can. Back at the house Kris subtly mentions to MJ that she’s heard that medical marijuana works wonders for people dealing with chronic pain.

“I’m not condoning this,” Kim says prissily. Unfortunately, no one snaps “No one asked you.” So chill, and they’re not even stoned yet!

MJ giggles and leaves the room for a moment, returning with a baggie containing WEED-INFUSED GUMMY BEARS. Prescribed by her DOCTOR. She asks Kris if she wants to give it a try, which I think counts as sharing prescription medication and is actually 100% illegal, but Kris, after protesting that she generally prefers wine, decides to give it a go. Cut to both ladies sitting on the couch eating chips and guac, the scent and crunch of which lures Bruce into the house from whatever helicopter-related thing he was likely doing. Kris, through giggles, informs him that she and her mother are both high on medical marijuana. Bruce flips his lid and starts yelling about how he doesn’t want “to have that shit in the house.” Is Bruce really in a position to be making house rules?

“You won’t have to,” MJ says, pointing to her belly, “It’s in here.” She and Kris die laughing and then she does a stoner dance.

The other major event (such as it is) in this episode is the girls flying to Miami to attend the re-opening of DASH Miami. Kourtney, still furious over being denied her $25k consulting fee, refuses to ride in the same car as Khloe. After a party at the store that includes such illustrious guests as Jonathan Cheban and Fat Joe, she has to reconsider her anger as Scott starts getting increasingly drunk and screaming about how people need to “watch the Lord” and how Fat Joe’s name is actually Raúl.

The family is staying at the Versace mansion.

“Oh my god, I cannot wait to do a photoshoot in here,” Kim says as she wanders around Gianni Versace’s bedroom, which she also pronounces “romantical.” At dinner Scott continues to drink with a gaggle of Miami’s most disgusting men, scream, and talk about peeing himself.

“You should take a break,” Kylie suggests. Scott heeds her advice, in his way, by putting on a pair of blue velour sweatpants and doing flips on his giant bed. Kourtney seems furious with him, but it prompts her to make up with Khloe and commend her for being the bigger person in her dealings with Lamar (she takes a phone call at the end of the episode where she is more patient and kind with a clearly not-lucid Lamar than he really deserves). As a reward, Kourtney waives her consulting fee. #Framily

Next week: my DVR cut off so I assume it’s a full hour of MJ stoner dancing? 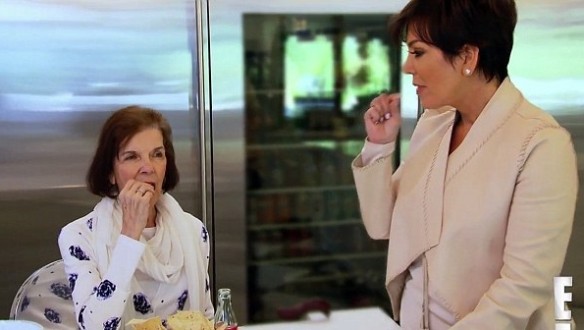