Kim, Peenk and the other orphans. (Photo via E! Online)

Yes, the Kardashians were still in Thailand this week. On this episode, though, they get ~spiritual~ which is actually kind of rare for them, Southern Californian as they are.

But first, Khloé punches the shit out of some guy. She has decided not to go back home because “it was too much work” to change flights, or something. Plus, she doesn’t want to feel guilty for leaving her healthy and svelte family members in Thailand in favor of hanging out with Rob.

This boxing jaunt also sets the scene for the most boring plotline of the episode: Brody and Brandon try to set Khloé up with a guy, Kris pretends to be Khloé in order to arrange a coffee date, and then… nothing happens? Khloé learns a valuable lesson about how much her step-brothers think she needs to get laid? Idk.

Back at their perversely luxurious hotel, Brandon is playing the guitar while Bruce ad-libs a little ditty about their trip. It’s actually cute, and total typical-family-vacation-downtime behavior.

Not so typical: visiting an orphanage to drop off some free stuff from your family’s Sears collection. But that is what the Kardashian-Jenners are doing, because they are charitable on TV.

It’s not surprising when the entire family turns the orphan visit into an epiphany most people have by the time they are seven.

“I’m really impressed with how happy these kids are with so little,” Kim says, before she and her family point and gawk at the muddy river the kids sometimes use for recreation.

It is surprising when the camera cuts away to a confessional of Kylie, who still has her old face in the rest of the episode. In the confessional, she’s already got her new lips and blue ombré hair! Busted. Let that be a lesson to you, children: don’t have work done until after you’ve totally wrapped shooting for the current season of your reality show.

Brandon starts playing the guitar and Leah starts singing in her odd reptilian voice. All the other Kardashian-Jenners sit on a bench between the two of them, awkwardly swaying. Kim sits in the audience with a horrified look on her face.

Then, Kim has an emotional connection with an orphan named Pink (pronounced in Kim’s native Calabasas tongue as “Peenk”). She will later try to adopt Peenk. When some guy tells her Americans aren’t allowed to adopted Thai children, she and Kris compensate by giving the orphans goodie bags with even more Kardashian krap.

They also bestow upon them a small pool so that they don’t have to play in the mud river anymore. None of them complained about the mud river, though, despite how much it grossed out the Kardashians. It’s pretty insensitive. Some beds might have been a better option? But, hey, I haven’t given any foreign orphans free merch from my namesake collection, so I won’t judge.

Khloé drops Rob’s name in a confessional, further trying to solidify her rep as the nice sister.

“I just feel so blessed right now,” someone says aloud. I always thought people only typed that into Facebook.

What happens next? The boys go on a trip to see some boxing. It’s pretty boring. Khloé gets into some real talk about Lamar.

“Lamar stuff will weigh on me for the rest of my life,” she says. “The marriage didn’t work out because of m, because it’s not what I wanted… He got so sloppy and started messing with all those girls and all those girls wanna do is get their 10 seconds of fame.”

Does that mean as long as the affairs were kept quiet, Khloé would have been okay with it? Meh. Either way, shitty situation.

In another room of the labyrinthine resort, Kim’s life is totally effing amazing. She’s on the computer. She’s wearing a coveted Yeezus tee. The carpet is smushy and cool. She is L-I-V-I-N. Then, Brody walks in. Or maybe it’s Brandon. I wrote both names in my notes.

“What’s with this carpet?” Brodyandon says. Then, they start talking about the orphans, etc. Kim drops a really fun tidbit about Kanye. He has to do 50 hours of community service for assaulting a paparazzo, she says. But this isn’t the first time he got in trouble for that. A few years ago, he had to go to jail when he grabbed a photog’s camera at an airport. He spent the night in jail and used his one phone call to order Mr. Chow’s. Oh, Kanye! That should be a new segment of this damnable show. Oh, Kanye!

Next, outside on the beach, Kris tells us what’s going on with Rob: he’s gained 75 pounds this year, he wants to be in private, Khloé feels responsible and is upset (did you know that?). Adding insult to injury is the fact that Kris enumerates his numerous problems while lying on a bed on the beach in her bathing suit and sunglasses. Also, she’s clutching an issue of golden child Kim’s Vogue to her chest.

But, as is usually the case when people are talking about Rob, the topic immediately turns to Khloé’s heroism

“It’s a testament to her because she’s a strong person and she’s been going through so much, but it’s important for her to play the card so to speak and say, ‘I want to take care of myself,'” Brodyandon says. There is not a single clause in that sentence that is not a cliché.

Then, everyone goes to a Buddhist temple. They’re all appropriating their own muddled-up ideas of Middle-Eastern/pan-Asian culture in their own ways: we see henna ink, flowy and modest clothes, fake bindis. Kendall sports a bright blue turban from Urban Outfitters.

Of Buddhism, Khloé the state-school freshman toying with the idea of an international studies major says, “I know it’s a peaceful religion. I don’t know what else.” She adds in a confessional that the vacation has been “very emotionally draining,” pretty much dashing any sympathy we ever had for her.

She “peacefully” storms off to kneel in a huff in front of a Buddhist monk. Kim then korners her and tells her not to stress about Rob. She tells Kim it’s unrealistic not to stress.

At this, my boyfriend who hates this show and is in the same room against his will slams his laptop shut and roars, “What has she ever done to show that she’s taking too much responsibility for Rob?” then storms away.

Then, some guy pretends to grab Kendall’s butt. She whispers to Brodyandon, “That guy just touched my butt.” The heroic brother slaps the guy’s glasses off his face. A Kardashian-Jenner bodyguard then storms the bar-goer (who’s probably a plant, let’s be serious), pushing him out of the shot. EVERYONE CHEERS FOR BRODYANDON. All he did was slap someone’s glasses off and then the bodyguard did the rest. His ass would have been grass if it wasn’t for that bodyguard. Ugh.

Oh, then they do that thing where you let a lantern float into the night sky in order to get rid of your tears or something. On the way down, Kris is heard muttering both “bitch” and “piece of shit.” They all announce what they’re “letting go” of, one by one, and pat themselves on the back.

“These lanterns are really cool hopefully everyone’s getting rid of their negative energy I know I did,” Kylie mutters. God, just let her go be a teen with her friends! Why is she on TV?

Next week on Keeping Up With the Kardashians: Actually, next week’s episode looks to be the best since Scott shoved a $100-bill into a server’s mouth in Vegas. Here’s what we’ve got next week:

• Kris tries to get her mom to take medical marijuana. Kim announces she does not condone it.

• Kourtney is trying to interior-decorate Khloé’s new house. “Take a girl to dinner before you just fuck her up the ass,” Khloé grunts.

• Kourtney and Scott somehow land an invite to the Versace mansion and Scott is back to his old shenanigans. We are treated to a shot of him screaming: “I just pissed and dropped a little pee pee in my pants!” 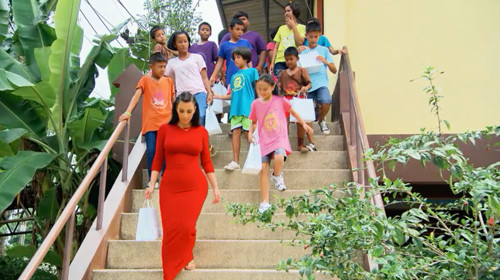