This week we rely yet again on little Mason Disick for the cold open, as he shows Kim the toys he gets as rewards for sleeping in his own bed. Kim isn’t as fascinated by this glimpse into the Disick family’s co-sleeping-situation-gone-amok as I am, and changes the subject to Khloe, who is dating French Montana but hasn’t confirmed it to her family. Kourtney and Kim agree that Khloe is being super “shadeballs” right now. Also, Kim “thought she only liked black guys.” 🙁

“I’m just not sure who he is,” Kourtney says. Well, that much is clear.

In the next scene we’re updated on the progress of Kim’s wedding as she shows some blurred-out pictures of the venue to her family. What is the point of blurring that stuff out? We saw everything a few months ago, and it’s safe to assume that almost all of the show’s viewership is comprised of the kind of die-hards who sought out the greatest wedding portrait of all time the second it was made available online.

“I like things that are oversized and dramatic,” is Kris’s contribution.

“So, the night before, we’re going to drive through the gates of Versailles…” Kim natters on, not listening.

“Thanks for doing it super low end,” Scott the French revolutionary says sarcastically, sauntering out of the room. Kris keeps trying to insert herself into the wedding planning process, begging Kim to let her at least throw her a shower, but Kim keeps snapping that they “don’t have time,” which…if they are the ones making the schedule, they could definitely squeeze Kris’s stuff in. It’s not like they’ve been ordered by a celestial being to be wed by a certain date or risk a rift in the space/time continuum.

Meanwhile, Khloe is doing low budge stuff that her mother can’t even be bothered to show up to, like hosting Chelsea Lately, and she’s getting fed up. She vents about it to her “family friend/makeup artist” and there’s no time when I feel more sorry for the Kardashians than when they are hanging out with “friends” who are also employees. It follows, then, that she’s in a foul mood when her smug sisters show up to her room at Rob’s place on a fact-finding mission to figure out “who is this crew [she’s] been hanging out with.” Khloe and her caterpillar brows stay focused on her computer the whole time. Good for her! She’s not obligated to tell those nosy bitches anything!

Later, she’s going through her new home making a list of furniture to buy with Malika, who informs us all that “[her] weave is so tight [she], like, can’t wear it down,” and her mother, whose decorating expertise is apparently essential. Kris, however, spends the whole time taking calls and loving chandeliers that Khloe does not love, making Khloe increasingly furious. Everyone is constantly drinking out of these enormous plastic cups filled with yellow liquid, which is either Master Cleanse tea or pure engine fuel for famebots. Poor Kris really gets dumped on in this episode, as in the next scene Kim stands in front of a rack of 300 identical black blazers in her bedroom and yells at her for wanting more information about the wedding, like when and where it will be. Kris begs Kim again to let her throw her a teeny tiny supplementary party.

“We’ve had so many parties in my life, I have no time,” Kim yells.

“Wow, what must THAT be like?” Everyone else in the world yells back. Kim apparently feels that between the wedding, North’s first birthday, and Kanye’s birthday, she’s up to her eyeballs in insane parties, and that’s when I figure out that Kim isn’t being a crazy person — she’s acting as the middle man/barrier between her mother and the actual bridezilla, whose name rhymes with “Bonye Best.” I have a sneaking suspicion that every time Kim mentions her “wedding planner” she also just means Kanye, but I haven’t been able to prove it yet.

It’s Mother’s Day, apparently, and Khloe is cooking at the Jenner manse. Everyone is bummed out because Kendall is leaving California for a month.

“For where?” Kourtney asks.

“New York, LA, Paris and back,” Scott says without missing a beat, looking at his phone the entire time. We barely have time to appreciate what an underrated gem Scott is (the most underrated, like having a Modligliani in the garage) when suddenly Khloe is flipping out because she got the questions for a radio interview and the first one asks her a hypothetical about what she would do if she got married again. She thinks that Kris should have made it clear that they wouldn’t answer any questions about her marriage, although her anger seems a little over the top given that these are questions being sent ahead of time for approval rather than being asked of her in a live interview setting. Nonetheless, Kris gets on the phone with whomever a manager gets on the phone with to fix it after minimal protestation (“I’m not PR!”). Kim, Kourtney, and Scott look on awkwardly and Kris takes the opportunity to vent to her favorite daughter Kim, who has to add that she thinks that Khloe is shopping too much.

Kim takes a break from a photo shoot with her hair in insane braids to complain about how her mother called “the wedding planner” without asking her. Again, this plotline makes way more sense if you substitute “Kanye” every time someone mentions the wedding planner. Later Khloe takes her mother to an apology lunch where she slowly crunches on salad greens while she explains that she wants to feel like she’s being protected during this vulnerable time in her life. She’s pretty good at explaining her feelings, that one. Less good at explaining her feelings is Kim, who shows up to her mom’s house to eat sushi, claims that she wants to apologize and then start fighting with Kris all over again. She ends up declaring she’s going to move out and live in Kourtney’s rat palace instead. Klassic Kim.

Speaking of the Rat King’s castle, Khloe and Kourtney are going through Penelope’s baby clothes and talking about how it’s so much fun to dress little kids because they “don’t have body issues.” After Khloe pronounces a lacy vest “lesbian chic” Kourtney shades her about who she’s been hanging out with and where she’s been going (it sounds like Vegas, or Kardashian Mecca, is the most frequent destination).

“I am just a girl who likes to go out on the weekends…maybe to another state!” To her credit Khloe can’t get through this load with a straight face. Kourtney is really the mother hen this week, as we later see that Kim made good on her threat to take refuge in her home amongst the rats, standing strong despite Kris calling the land line three billion times in a row and the sight of baby Penelope drinking a bottle of San Pellegrino.

Finally, we get to the real action in this episode, courtesy of the “always game for a contrived plot development” Jonathan Cheban, who is sporting a new haircut, reJuvedermenated-looking face situation and a shirt that says “Aristocrat.” He accidentally shows up to the Jenner house looking for Kim because she didn’t tell him she moved (HAHAHAHAHAHA) but luckily she stops by on her apology tour. The two of them presumably leave Bruce to sit at the kitchen island eating packets of goo in perpetuity as they take off on a “stakeout,” i.e. hanging out in the parking lot of a club where Khloe is supposed to appear with French Montana that night. Kim is dressed like Ava Gardner and smacking gum. She’s never been more likable.

My goodwill toward her immediately fades when she tells Jonathan Cheban “We are so lucky that my daughter is a good sleeper and sleeping because these things are so not appealing to me,” like 1. As if North West has ever drawn a breath that wasn’t in the presence of a nanny and 2. Let’s never forget the time that Kim had to get LASIK surgery so she could excel at her sexy bathtub dance with the Pussycat Dolls in Las Vegas. It’s a little rich to turn up your nose at clubbing when that was on the Kim K menu until very recently.

Anyway, she gets back on my good side with the one-two punch of making Jonathan Cheban stand watch while she takes a nap and commenting “Bucket hats are coming back and they disturb me.”

Eventually Khloe and French pull in to the parking lot, Khloe in the driver’s seat (ugh, Khloe, your boyfriend is a scrub), and then LAMAR SHOWS UP! AND IS TRYING TO WALK IN TO THE CLUB! OH GOD! HOW DID THIS HAPPEN? Kim and Jonathan Cheban hop out of their car and literally run over and start banging on the window to “warn” Khloe.

“We’re sleeping in the car!” Jonathan Cheban chirps adorably. Kim fills in Khloe on What She Just Saw as French Montana fingers his chains, arranging the lower half of his face into a bemused smile. Khloe doesn’t want the club owners to refuse to let Lamar in and notes that he’s likely trying to make contact since she recently changed her cell phone number, although I would also guess that Keeping Up With The Kardashians producers may have played a role. The club does end up turning him away, and we watch Lamar amble down the street before the camera heads inside to capture Kim trying to make polite conversation with French & Friends, who not only likely can’t hear her but almost certainly are not interested in interacting with anything that doesn’t have a lens. …As in a camera lens. ….Get it? Whatever, Kim was kind of fun this episode.

Next week: I wracked my brain to try to remember what I saw in the preview and I got nothing. The brain equivalent of TV snow. Hopefully it involves Rob! 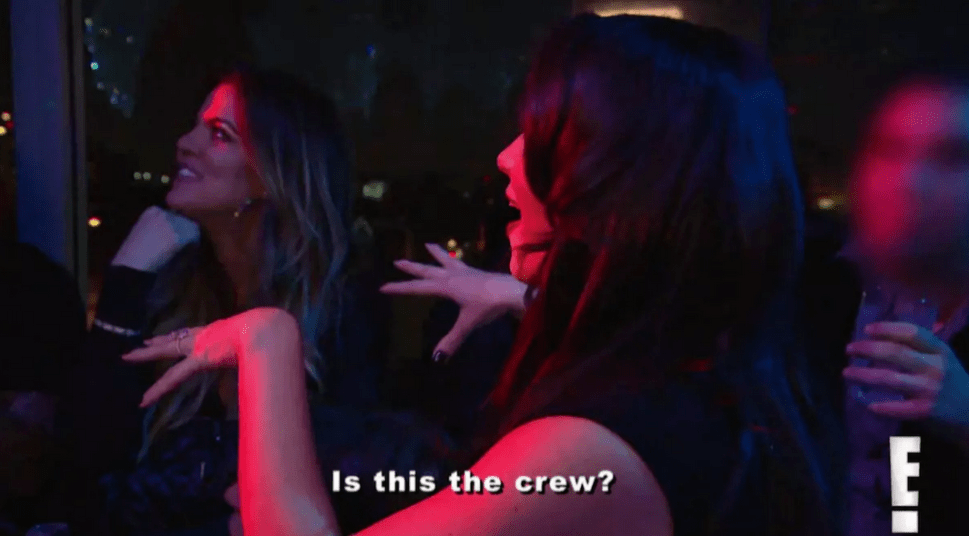