The banks of the Hudson are lined with some of the most valuable real estate in the world, but neither marble baths nor state-of-the-art lighting systems are impervious to the catastrophic effects of extreme weather. And in the wake of Hurricane Sandy, amidst the swamped basements and waterlogged generators, it became clear that the old protective measures were no longer adequate

Developers, architects and owners faced the dilemma: how best to protect properties against future floods (while still, of course, retaining healthy profit margins)?

At Superior Ink, the uber-posh condo in the West Village whose residents—among them Marc Jacobs and Hilary Swank—were forced to evacuate for two months after sea got into its pipes during Sandy, the building decided to move the mechanical systems above ground.

Meanwhile, the Witkoff Group’s 150 Charles Street, which was under construction when Sandy hit, boast not only the expected array of luxuries like a 75-foot lap pool and 33,000 square feet of landscaped greenery, but two natural gas-powered generators that run the fire-alarm system, emergency lighting and elevators.

Another development that has incorporated flood protection into its Foster and Partners design is 551 West 21st Street, scheduled for completion in 2015. After Sandy, developer Scott Rensick had plans modified to reform the building’s sheet glass wall, which is now supported by a reinforced concrete base clad in granite. The entrances to the building have all been fitted with emergency metal barriers, and the ceiling of the gym, playroom and community space have been raised.

And last week, we watched as an Aqua Fence, a renewable flood barrier system, was deployed at 110 Horatio Street, a luxury Rockrose property that overlooks the Hudson. The building was encompassed by a perimeter of interlocking blue panels which, despite looking somewhat alien in their West Village surroundings, can be flat-packed and stored away within minutes. The traditional method of sandbagging seems a monstrous task in comparison. “It used to take a couple of hundred people to set up sandbags, working for twelve hours,” explained Adam Goldberg, the NYC director of operations for Aqua Fence. “Now it only takes a dozen people three hours.”

Mr. Goldberg said that the device has proved a popular alternative to more expensive and extreme techniques like moving electrical equipment and generators onto higher floors; sales accelerated rapidly after Sandy.

“There was minor interest before,” said Mr. Goldberg, “but, since Sandy, sales have increased by 100 percent.” In the U.S. alone, AquaFence protects more than ten billion dollars worth of real estate and public utilities.

The AquaFence is currently popular amongst high-end clients in the West Village and Lower Manhattan, but Mr Goldberg believes that it has wider appeal. The cost of a panel is between $300 and $700 depending on size which, as Mr. Goldberg points out is financially appealing in comparison with the $20 billion flood protection plan which was proposed by former Mayor Michael Bloomberg. (Though to be fair, Mr. Bloomberg’s quote was for far more than a single luxury building.) Instead of building sea walls, sand dunes and an entire neighbourhood called “Seaport City,” the AquaFence could provide a quick and practical alternative, especially for less wealthy buildings that cannot afford pricier protections, he argued. “You could surround an entire housing project in Manhattan with the AquaFence.” And, given the difficulty of retrofitting the buildings otherwise, we might well need to. 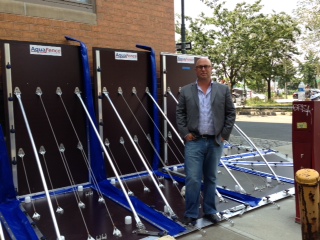