Tinder, eHarmony, OkCupid—after a while these dating sites and apps grow stale. But when we think of unplugging and meeting someone the old fashioned way, what comes to mind is usually turning up the charm when chatting with the Starbucks barista or finally asking your co-worker to dinner.

Not hanging up thousands of posters across the city.

Yet, Dan Perino, 51, insists it’s working. A couple weeks ago the professional artist started posting his flyers around the East Village, which boasts a headshot and the words “Looking for a girlfriend.” For those skeptical of Perino’s intentions, he details:

“I’m really looking for a girlfriend. This is not a joke. Just tired of the singles scene and hoping to meet the right person. I am a professional and a creative person. You know who you are. To me each and every person is beautiful. Open to the possibility of the relationship morphing into something more profound.”

Above his phone number, he is careful to specify “serious enquiries [sic] only.” And while you’d think avoiding prank calls after plastering your phone number on traffic light poles and buildings across the city would be something of a pipe dream, Mr. Perino said of the 130 calls he averages a day, many of them are genuine.

Over the last 16 days, he’s gone on 39 first dates. Usually, he takes each woman out for a cup of coffee, and, most of the time, they each pay their way. Because printing thousands of posters and treating every potential love interest costs money. But even more so, it takes time.

Mr. Perino sometimes spends as many as nine hours putting up 1,500 flyers. This process has become further complicated by the fact that his face is now recognizable to passers-by.

“They take pictures of the flyers and show them to their friends and I get stopped constantly—I’m not bragging, I’m just saying. I get stopped a lot and it slows me up from posting flyers. It’s kind of enjoyable, but it’s hard to accomplish my flyer duties for the day,” lamented Mr. Perino.

Still, he insists that hoofing it around the city is better than setting up an online dating profile.

“For online dating you have to sit on your computer for 14 hours and hope someone looks at your profile. It’s a never ending thing. You’re spending a lot of time in front of a screen when you could be outside,” he said. After a beat he added, “You could be posting flyers.”

Okay, so say Mr. Perino’s ploy is the final frontier of dating. What kind of women are responding to an ad on a poster?

Mostly, he said, women who are on the same page as him about the futility of online dating. And mostly women in their 20s and 30s.

“With a couple of exceptions, all of them have been younger. I’m interested in women in their 20s and 30s. I want to keep the option for marriage and possibly another child so I’m not going to have that if I find a woman my age. But I really am thinking about marriage and a child. Just one,” he said.

Mr. Perino continued. “They were all kind of nervous about being around me because of the fame.”

Yup, that’s it. It’s not because these women think they’re potentially having coffee with the pre-Internet version of the Craigslist killer.

Though Mr. Perino emphasizes that he’s into doing things the traditional way—one-night stands need not apply, he added that his poster campaign switches up conventional gender roles.

“I turned the tables on the women. Women have to call me and I no longer have to be the hunter,” Mr. Perino declared.

Well thank God for that. 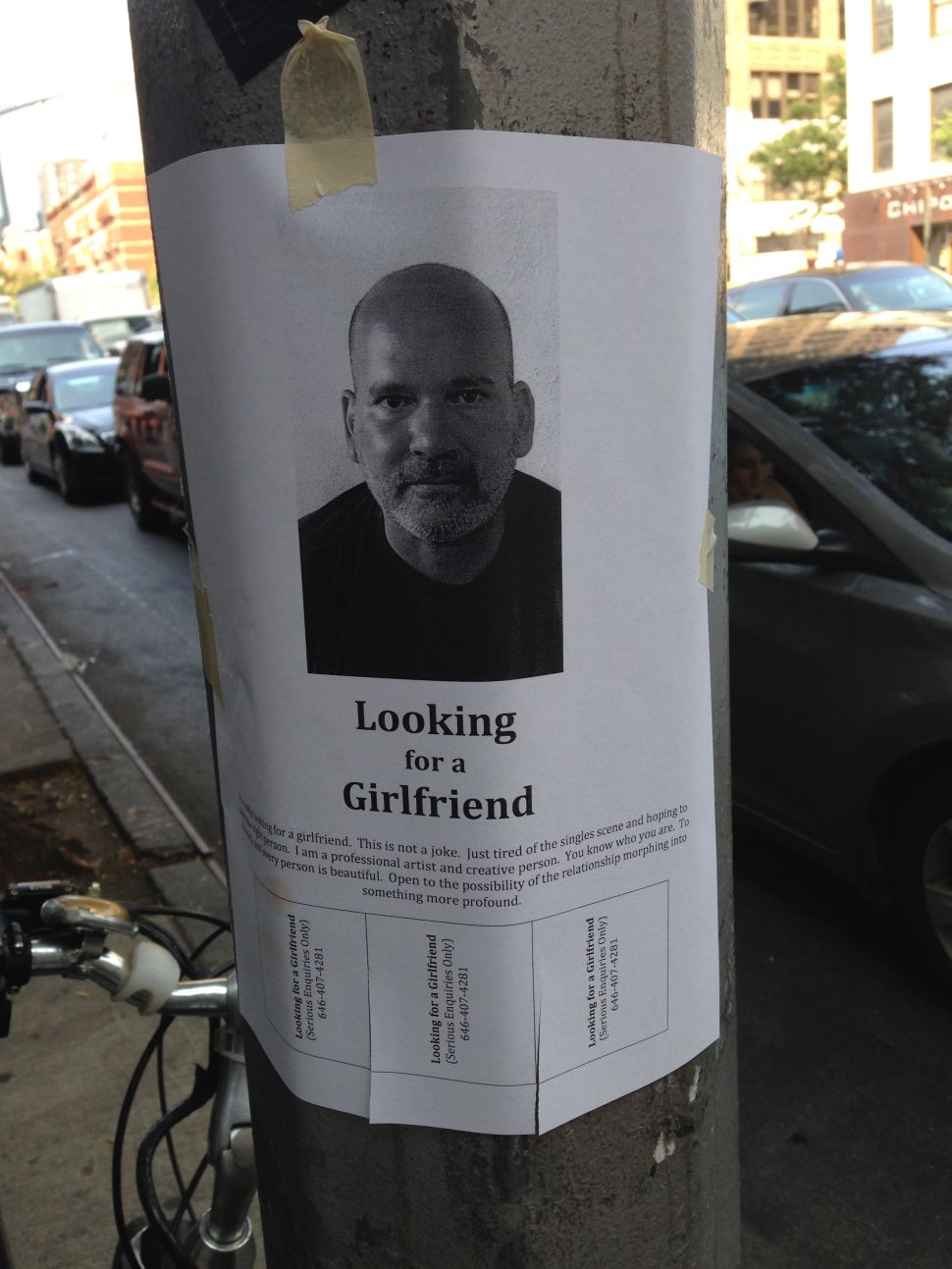