In a small courtroom, a federal judge asked child after child the same questions, through a Spanish interpreter — their age, their name, who they were with, whether they went to school. She asked their lawyers how they pleaded and whether they sought asylum.

The courtroom’s benches were full, and in the hall other children who entered the country illegally and alone — now reunited with parents or other sponsors — waited to answer the same questions as part of the “surge docket” underway to move quickly through their immigration cases.

“It’s heartbreaking,” Council Speaker Melissa Mark-Viverito said after a tour through the courtrooms in the Jacob K. Javitz Federal Building. “I think it’s important to go through, at least walk through the process, to understand what the families are going through and also to understand from the perspective of the service providers — that are in many cases doing this with extremely limited resources — to really understand each step of the way, and to figure out what additional support we as a city could probably provide.”

Since Friday 270 children have been called to court here, and about half of them did not arrive in court with lawyers or advocates, Jojo Annobil of the Legal Aid Society said Tuesday. Legal Aid and other groups are working to change that, informing families of their rights and asking judges to delay hearings until they can find attorneys to help the children, who do not have a legal right to court-appointed lawyers.

“They want to make sure in a case where a child maybe does not have legal representation, they work it out with the judge to delay hearing the case so that the advocates can find representation for those children,” Ms. Mark-Viverito said.

That, Ms, Mark-Viverito said, will take extra resources — and the speaker, who has previously pushed for the city to provide space to house more of the unaccompanied minors, said she took to tour to help determine how the city might be able to help.

The surge docket was set up to deal with the growing amount of children illegally entering the United States, fleeing violence in Central America. Several children whose cases were in court today were accompanied by their mother or aunt, but all of them entered the country alone before being brought to the city. The federal government works to put the children with relatives or other sponsors — that’s how many wind up far from the border in New York, which has the second-highest number of unaccompanied immigrant children after Texas — or places them into temporary shelters.

Ms. Mark-Viverito flipped through a questionnaire provided to children and their guardians about the reasons they left their home.

“Are you afraid of gangs?” she read, before rattling off other phrases on the form: “Kidnapped, gangs, dead bodies, how did you get to the U.S.?”

Many of the children appearing in New York courtrooms have legal recourse to stay in the country under existing law, due to the dangers they faced at home, Mr. Annobil said. But that’s difficult to prove without a lawyer, advocates say.

In the courtroom, proceedings moved swiftly. The judge read the “alien number” of an 11-year-old boy from Guatemala, clad in a soccer shirt that said “All day, every day,” and then of his little brother. She waived their next appearance in court so they could go to school.

“Good luck in school next week,” the judge told the boys through an interpreter.

In another case, a lawyer argued the judge should not order another status conference for his young client, even if the client would not have to attend thanks to a school waiver.

“It just seems like we’re putting pressure on the children for no reason,” the lawyer said, adding that while the child didn’t have to attend, he had to pay for a lawyer to do so.

Ms. Mark-Viverito said the workings of the court were important to see.

“How congested it was, the number of people we’re talking about, how distressing it must be for the families and how disoriented they must be, not understanding,” she said. “It’s great to hear that organizations like Legal Aid are really doing a lot of effort to have parents and custodians and the sponsors understand their rights, and to really walk them through the process to demystify it.”

The amount of children in need of help is clearly straining the nonprofit groups, she said.

“My hope is that we can figure out a way that we can lend additional support — that’s what I’m trying to figure out with the administration and others that are interested in this issue,” Ms. Mark-Viverito said.

Public Advocate Letitia James recently led a call for private sector lawyers to provide services pro bono, and said she herself would join in.

While some advocates have slammed the surge docket as being stacked against the children and a quick means to deport them, Ms. Mark-Viverito said she didn’t get that impression and thought the process was a way to move the children out of limbo and toward some sense of normalcy and routine.

“The idea, I would think, is not to speed up to deport them. It’s to try to get them through a process where there can be some resolution and some sense of normalcy brought back to their life,” Ms. Mark-Viverito said. “It may not be perfect, but I would think that that’s the logic behind it.” 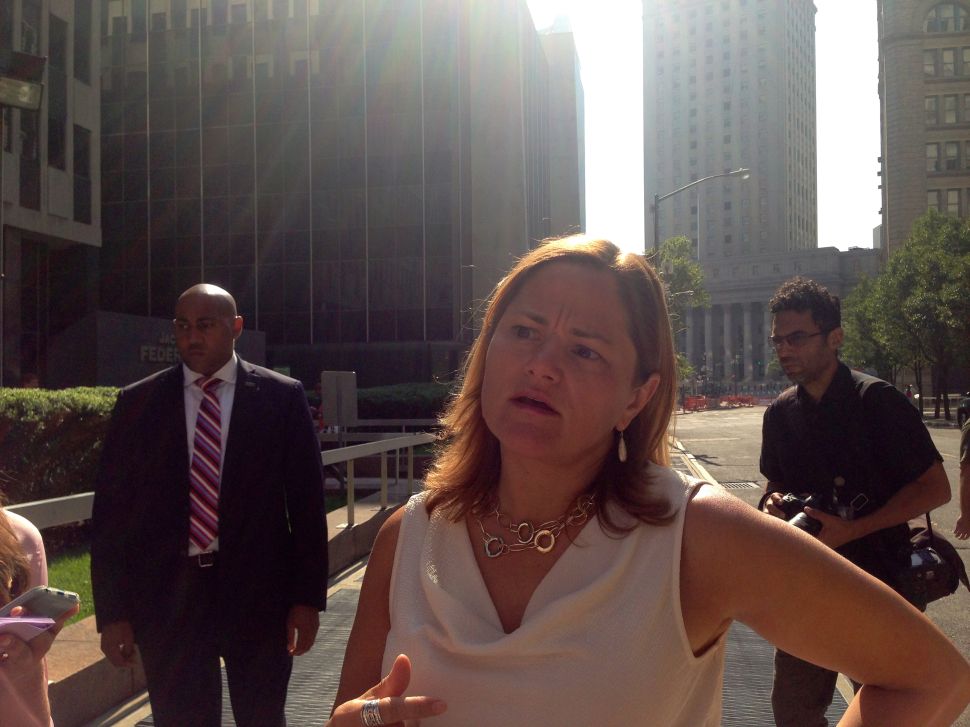