There are only 11 home cooks left. As they enter the MasterChef kitchen to the usual dramatic orchestral music, clips roll of Elizabeth and Francis telling the camera about how they want to be in the top 10. Francis says that the only way he can win is if he stays true to his style of cooking. Francis has a unique style that could be best described as 90’s ska band. All the home cooks are at their stations and the judges are on their stage. In front of each home cook are two boxes. Gordon Ramsay announces that this Mystery Box challenge is all about choice.

Each home cook gets to select their Mystery Box. There is the an everyday ingredient box containing ground beef ham, canned olives, iceberg lettuce, nacho cheese dip, tilapia, pickles. The other box is the luxury ingredient box containing Kobe beef, ahi tuna steak, fresh peas, caviar and black truffles. You have to go for the expensive box right? The only two that don’t are Daniel and Victoria. They both think they can stand out by elevating a jar of cheese dip and iceberg lettuce. If this was MasterChef Pittsburg they’d definitely be correct.

Joe and Graham check to see how Victoria is doing with the cheap box. She’s making the tilapia with ham and an iceberg salad with a dill pickle and bacon vinaigrette. Gordon checks out what Elizabeth’s doing. She is preparing a seared pork chop on herbed biscuits with a mustard sauce and a pea salad. Gordon asks Elizabeth who she doesn’t see in the top 10 and she loudly whispers Leslie. I hope not. A guy that hated needs to be around. Speaking of the evil rich guy, Team J&G check on what Leslie’s cooking. Les is going for it all, cooking all the fancy proteins with a pea puree and parsnips with truffles. Joe tastes the puree and the parsnips. It’s bland. They both need salt. Leslie tries to argue that he has put salt in but you don’t argue with Joe. If there is one thing Joe knows it’s food and there is one thing Joe doesn’t know it’s how to cook food. What’s that wacky Francis up to? A tuna and beef chessboard. Francis says he wants to be the face and the voice of gastronomy. Is that the science of constructing meat board games?

Hands in the air. Time is up. The judges have tasted all the dishes during their preparation. They all take a final look before they decide on the top three. Elizabeth is the first up with her seared pork chop on herbed biscuits. The judges all praise the dish. Graham says it’s the best Elizabeth has done so far. Next up is Victoria with her tilapia on top of ham with nacho cheese sauce. Graham says that this might be Victoria’s first Mystery Box win. Third on is Leslie with pork, beef and tuna with a pea puree and parsnips with truffles. Gordon comments that Leslie was the only one with the “balls” to prepare all three proteins. Gordon is onboard with Leslie saying that this is the best dish he’s made yet and that “he’s no fluke.” Joe says Leslie ended up seasoning his dish perfectly. And the Mystery Box challenge goes to the people’s champ, Malibu Leslie.

Winning the Mystery Box means that Leslie is in the top 10. He does not have to cook in the elimination challenge. He also gets to go back in the pantry with the judges and select, from two or three options, what everyone else has to cook. The elimination test is stuffed pasta. Each of the judges have a stuffed pasta that represents them, Joe is tortellini, Graham is caramelle and Gordon is ravioli. The judges must’ve taken that BuzzFeed “what stuffed pasta are you” quiz too. I’m a gnocchi. Leslie picks the caramelle which kind of looks like wrapped up candy and probably the more difficult choice.

Leslie gets to stand up in the balcony and watch everyone fight to stay in the game. The home cooks have one hour to make the fresh pasta and they only get five minutes in the pantry. Cutter is concerned because he never makes Italian food at home. He never makes whatever the challenge is at home. Francis has the idea to color the pasta with beet juice so it looks like bubble gum. That’s five minutes. Everyone back to their stations.

There’s one more advantage for Leslie before everyone gets cooking. Leslie gets to take away one home cook’s pasta machine and give them a hand roller. Leslie then proceeds to go to each person pretending to give them the rolling pin and then moving on to the next person. He ends up taking Daniel’s pasta machine. That was the obvious choice since Leslie hates Daniel. Graham asks Daniel if he’s surprised. Daniel say he’s not because, “Leslie is a petty man that bears grudges…” That grudge goes back to episode three when Leslie felt wronged because Daniel didn’t save him from elimination when had the opportunity. Enough reminiscing, time to make some pasta. 60 minutes starts now.

Nobody has enjoyed their time up in the balcony more than Leslie. He is looking down on Daniel hand rolling his pasta with obnoxious forced laughter. It’s getting to Daniel. Daniel starts talking some nonsense about baseball and he’s calling his shot like Babe Ruth. I think the rolling pin is supposed to be the bat. He does call Leslie a “fuck#r” so that was cool.

What’s everyone making? Gordon sees Francis’ beet pasta and calls him crazy. Graham (no Joe? Hope they’re not fighting) asks Willie what he’s up to. Willie is making a dessert caramelle filled with apples and squash with a cremon glaze. Graham calls that crazy town. There’s a whole lot of crazy going on.

A Graham-less Joe talks to Daniel who is making a short rib with kimchi and watercress and added a little wine reduction to the pasta dough. Joe is a little worried about the wine reduction. Gordon checks on Jaimee who is inspired by her Dad’s sauce recipe. An Italian from New Jersey with a sauce recipe is not going home this week. The judges huddle up. Gordon likes Jaimee and Courtney’s pasta but think the Francis experiment tastes awful. Time is up.

Daniel is the first called up to face the judges. Daniel made his caramelle stuffed with short rib with kimchi and watercress with tamarind habanero curry. Graham says right away that the pasta looks less appealing because of it’s color. The red wine reduction that Daniel added makes the pasta look brown. That’s the color Daniel was going for. Graham can’t believe that color is what Daniel wanted. Well, how does it taste? Eh, not good. The flavor combination doesn’t make a lot of sense to Graham. Joe almost chokes on the habanero and says you would never put wine in pasta. Gordon spits his bite out into a napkin. It’s wrapped up by the Ramsay burn, “I would like to congratulate you for standing out tonight, possibly, outside the door.” Ouch. Leslie is grinning like an annoying rich guy that married into a shit ton of money. With Daniel starting off like that, the other 10 must feel a lot safer.

Jaimee made caramelle with mozzarella filling in a creamy tomato and pork sauce. Joe loves it. Next is Francis with his beet juice short rib filled caramelle with cauliflower and pepper puree. Graham says it just doesn’t taste good. The flavors don’t go together and there’s no seasoning. Gordon calls up Cutter who made a short rib stuffed caramelle with vodka white sauce. Ok, what’s up with all the short rib? There must’ve been a sale at Costco. It seems like a great deal but then you buy too much. Anyway, Cutter had a good week last week, preceded by nothing but bad weeks. Could he really not be in the bottom three twice in a row? “You may have a face like a British bulldog chewed a wasp but you cook like an angel.” What? Thanks I guess, Chef Ramsay. Cutter is on a roll. Courtney has a simple mozzarella filling with tomatoes. Joe loves it.

Last up is Willie. He went way out there with his dessert caramelle the one week they don’t have to make anything sweet and Willie’s pouring custard on pasta. Willie is my favorite but he’s been struggling the last few weeks. Before he even tastes it Gordon is not happy with it. Gordon says he, “dreads tasting it because it sounds disgusting, it looks like regurgitated dog vomit. It’s just unappetizing.” And we have the second spit out of the night.

The top two and team leaders for next week are Courtney and Jaimee. Jaimee had the best dish of the night. It will be very interesting to see the perpetually frightened Jaimee as team leader.

It’s easy to pick out the bottom three. Daniel, Francis and Willie are called to the front. The pain isn’t too drawn out. Daniel and Willie are asked to step forward and they are safe. Francis is hanging up his apron and will be needlessly injecting beet juice at home. 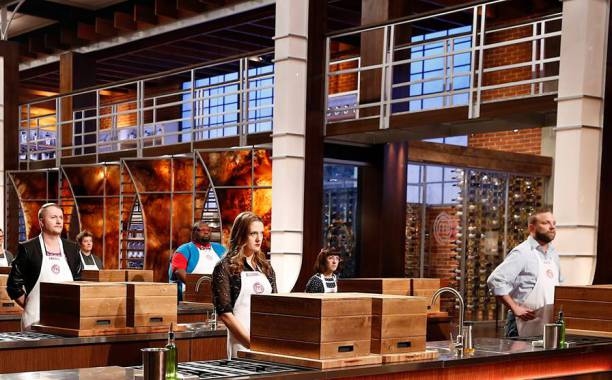