The home cooks enter the MasterChef kitchen as the judges take the stage. Now that it’s down to seven everyone has to walk a little slower to build the drama and make time for the video clips of Courtney and Willie. Normal opening comments here, but I’m worried because typically opening clips mean death for everyone but Courtney.

There is a Mystery Box to deal with but first a surprise for everyone. In their work station drawers are letters from home. All the home cooks are excited. Some are moved to tears. Is everyone sequestered? They get to talk to their families, right? Leslie is reading a letter from his wife like he’s doing hard time in San Quentin. He lives probably a 45 minute drive from the MasterChef kitchen.

Mystery Box time. Gordon instructs everyone to lift their boxes and out pour a pile of apples. Everyone has an hour to make an apple-based dish. No problem. Wait a minute! No desserts.

Get cooking. The clock is ticking. Willie’s concerned because he’s big on desserts and struggles more with savory dishes. Courtney goes right for the Philips Air Fryer because she knows it will cook her food perfectly without a lot of oil and… Hold on. That was a commercial. I feel used.

Everyone whom the chefs check in with seems to be doing fine. Gordon gets more personal when talking to the home cooks. He finds out that Courtney misses her little brother and Leslie eats oatmeal to keep him regular. Best pals Joe and Graham are puzzled by Elizabeth choosing to make hand pies. She’s not winning with those. Time’s up. Hands in the air.

The judges pick the top three based on what they saw and tasted while people were cooking. Christian is first with an apple stuffed pork chop with bacon, brussels sprouts, zucchini and red apples. Gordon is worried that a big piece of meat like a double cut pork chop might not be cooked enough but…Christian nailed it. Both Gordon and Graham say it’s cooked perfectly. Joe says Christian continues to impress him and calls him formidable.

Next up is Leslie and his apple stuffed pork loin with bacon and gruyere cheese plus a side of apple mashed potatoes. Graham says it’s perfectly seasoned and has great balance. Gordon says it’s going to be hard to get Leslie out of the competition.

Finally, Courtney is called up. Roll the clip of Elizabeth saying, “If Courtney wins this Mystery Box challenge I’m going to stab kittens because I can’t take in anymore.” Elizabeth really hates Courtney and apparently is not a cat person. Courtney presents her pork loin stuffed with apple, pancetta and swiss chard with pink lady apple juice sauce and an apple and celeriac salad. Joe remarks that it’s a smart dish because she used not only the sweetness of the apple but the acidity. Courtney then whispers in a breathy baby voiced, “thank you.” Graham is also impressed and calls the dish “Courtney at her best.”

And the Mystery Box goes to…you know it’s all Courtney. That means no elimination challenge for her and another big advantage. Back in the pantry Courtney finds out that the other home cooks will have prepare five dim sum dishes. The dishes are Har gow shrimp dumplings, shumai shrimp and pork dumplings, steamed buns with short rib, cabbage roll with minced pork and vegetable pot stickers. They’ll have make all those things cooking in pairs and Courtney gets to pick the teams.

Back out in the kitchen Courtney takes her place in the balcony and starts picking the teams. Courtney pairs up Christian with Willie because they work at such different speeds. Elizabeth gets stuck with Cutter because Elizabeth is a threat and Cutter stinks. That leaves Leslie and Jaimee. Leslie has worked well in pairs before so maybe Jaimee lucked out.

One last thing. The teams will not be working at the same time. They will be tag teaming it. One will cook, while the other comments, until a judge yells switch.

Elizabeth and Cutter are in sync. They are communicating and working well together. The judges are impressed by how well the two are getting along.

Leslie and Jaimee are a mess. Jaimee keeps getting frustrated and tries to yell. Leslie won’t say what he’s doing so Jaimee doesn’t know where to pick up on in the cook when she’s tagged in. The two can’t even agree on what is supposed to go in the dumplings. Jaimee says it doesn’t even matter because, “we’re screwed anyway.” Looks bad for them.

Willie and Christian are not working so well together either. Christian keeps yelling at Willie. That just gets Willie flustered and at one point he sort of shuts down. Christian needs to take off that knit hat and be more vulnerable. It looks like they’ve pulled out of their slump and they finish. Time’s up.

First team up is Leslie and Jaimee. This has got to be a disaster. There’s no way those two were able to put together dim sum. Gordon lifts the bamboo lid to reveal beautiful dumplings and pork buns. Oh, MasterChef, you fooled me again. Gordon says they could have created a perfect tray if only they had worked better together as a team. Leslie and Jaimee are very relieved.

Willie and Christian bring up their dishes. Not good. Christian burnt the potstickers. Graham says the dumplings are like rubber balls and there’s no sauce or garnish on the pork buns. “It’s just sad.” Then Gordon asks who seasoned the cabbage. It was Willie. “Take a bite.” It’s bland. “Based on this performance you both don’t deserve to be in this competition.” Oh crap.

That leaves Elizabeth and Cutter. The teamwork there must have turned out some amazing food. Oh good, it’s crap. Gordon rips them apart. There’s not enough filling in the potstickers. The cabbage rolls are gross. Everything looks bad and nothing is seasoned. Cutter says he didn’t realize it was even bad. We know you don’t, Cutter. Maybe Cutter will finally get sent home.

The clear winners are Leslie and Jaimee. They have an awkward hug and head up to the balcony. The next team to be named safe from elimination, but by a narrow margin, is Elizabeth and Cutter. Oh, bullshit.

Oh no. This is a nightmare. Willie had the opening video, not Christian. Maybe, just maybe, MasterChef producers won’t go predictable. The home cook whose journey ends now is…Big Willie.

Screw this. I don’t know that I can go on recapping this sham. No offense to my Twitter buddy, Michelin Star-rated chef Graham Elliot. Oh right! Graham! I’ll keep recapping for him.

But first we say goodbye to Willie, the people’s champ. 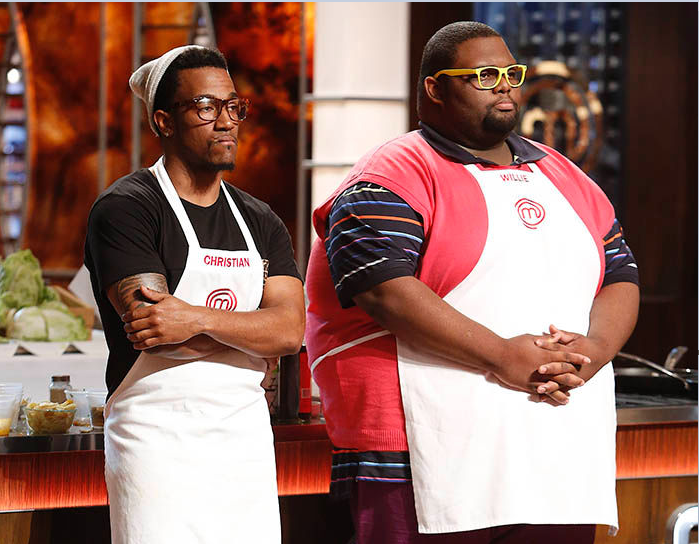