Auspicious, heavy-handed beginnings for this week’s episode, “Dirty Jobs.” Masters and Johnson are both in their white coats: Virginia has started back on the study! They’re, talking about how much work Bill has already done without Virginia, and about how Freud didn’t collect any real evidence, and about how all the sex they have is definitely an affair, and how she’s horribly unqualified and it was all her fa– oh, wait, of course. This is a dream sequence. One that actually mentions Freud. Virginia wakes up in the hotel room as Bill watches her creepily. The anxiety, it seems, is finally getting to her.

This is particularly appropriate, as our favorite Philanderer, Dr. Austin Langham, is at the Plaza hotel in Alton, Illinois, and spots the dynamic duo leaving their hotel room. Finally.

While Bill is being watched scientifically cavorting with Virginia, his wife is morphing from a sweet, boring character into someone wholly despicable. She starts out the episode unloading on Coral, explaining how much it makes sense that Bill never wants to see his child and just takes out the diaper bucket every night. She read an article that men don’t like change so he’ll probably come around. She’s stressed — she’s hosting a luncheon for the other doctors’ wives, and everything needs to be just perfect. The ladies coo over the baby, and wonder how Coral got so skilled with children, but as she explains, Libby tells her that no one is interested in the story. She response, coolly, that one of the wives had “axed.” Then one of the women discovers lice on Johnny’s head, and she blames Coral. She forces her to take shampoo, and when she doesn’t wash her hair with it, Libby washes it for her and then hands her money to get her hair done. Not only is it humiliating, but it stands in weird, horrifying conflict with even the low-level racism that exists for the rest of the characters. It’s partially that she’s placing all of her anxiety on to the only person she interacts with, but she is nearly unredeemable in her awfulness. Then again, if it’s an attempt to make us more sympathetic to Bill’s struggles, it’s also not working. Bill is still an ass to the people who are close to him, and as awful as Libby is, it doesn’t make Bill right.

Speaking of, the Pretzel King has come to make a deposit! Fertility treatments generally involve both members of the couple and he’s determined to do his part. While he’s enjoying Ava Gardner in the bathroom, Barbara tells Bill that Greathouse wants to come watch the study, and Bill says to make sure he knows that it’s elderly men engaging in auto-manipulation. Betty is still there and he offers her an ultimatum because honesty is important to him: either Betty tells her husband she’s infertile or he will.

Somehow, this works, and the three of them are hanging out talking about how poor Bets will never have babies. Bill hands Betty a jar of the Pretzel King’s seed. The King is absolutely devastated and heads off to try to pay a bill for fertility treatments Betty never received. It looks like the whole Pretzel kingdom is in trouble! Betty wasn’t always so good and sweet as she seemed to be at church! Don’t worry, the Pretzel King also has a secret. He met Betty at the brothel! He says, “I never thought you were a good Christian girl, I just thought you were the love of my life.”

Betty and her King are picking up where Barton’s character left off, as the non-traditional moral center to the show.

While the Pretzel King and Queen get to be dynamic, poor Lillian Depaul is forced to be a stately static hero. Not only is she terrified about her cancer treatments, she’s also trying to impress Dr. Papanikolaou, inventor of the pap smear. And then Austin comes in to gossip about Virginia. She starts to gush, saying how she thought she knew Virginia — that she was just some climber, attaching herself to a man so she could avoid the work. Before she could say otherwise, Austin was like, “nailed it!” He tells her all about catching Bill and Virginia at the hotel, and about Virginia’s feeble coverup. Lillian is clearly hurt. She even gives Virginia the opportunity to tell her all about it, confessing to her own youthful indiscretions (she cheated on the calculus test), but Virginia does not take the bait. The betrayal is enough to make Lillian give Dr. Papanikolaou her entire Pap program.

This, of course, is just a little more anxiety to heap on to Virginia. She’s actually putting in some work this episode to do right by Lillian, trying to convince Dr. Pap to nominate her for awards, literally finishing her sentences when she gets caught up out of nervousness and brain cancer. And Virginia is trying to remain independent, selling the heck out of the Calametrics. Unfortunately, she doesn’t want to make women feel badly about themselves. She needs money, though, and when she meets up with her diet-drug dealer, and tries to say she has a real career and dreams, her dealer shakes her damn head, which motivates Virginia to really put in the work to be successful on her own. Then she finds out Lillian has given the program to Dr. Pap without talking to her, and she still doesn’t have a job, so she makes her neighbor feel terrible about herself to make the sale.

Bill spends his time torn between fighting with Greathouse to get Virginia hired and slowly becoming more terrified as he finds out they’ve been discovered. The episode turns explosive, though, when Greathouse, who’d been angling to creepily watch the study, pushes to come in. Bill warns of transference, that being in the room just Bill and Greathouse is a quick path to homosexual feelings, but Greathouse confounds him by inviting a whole bunch of other doctors in to watch an attractive young woman use Ulysses. As the doctors eat Chinese, Bill tries to pull another ultimatum, which is the only form of negotiation he knows, by threatening Greathouse in the hallway. It doesn’t work out. Bill shoves an egg roll into a doctor’s mouth (which is not symbolic) and a brawl ensues.

But the real action comes at the end. After cornering Lillian and Virginia, Austin comes over to the Masters house for dinner. On the porch, he lays it down for Bill, asking him if it’s worth it to lose everything he has — his house, his family, his life — to continue on. Bill looks back at Libby in a way that is maybe supposed to look like love, but it actually looks a lot more like ambivalence. The next night, when Libby finds out he’s quit/been fired, she tries to rail against him — he never tells her anything, he keeps losing jobs, what are they supposed to do, and then it happens. Bill nearly cries. He swears he does everything for his family. That he will always take care of them. That everything he does, he does for them, etc.

It is not very convincing.

The episode closes with Bill accepting an offer for him and Virginia. They’ll be working at an African-American hospital. 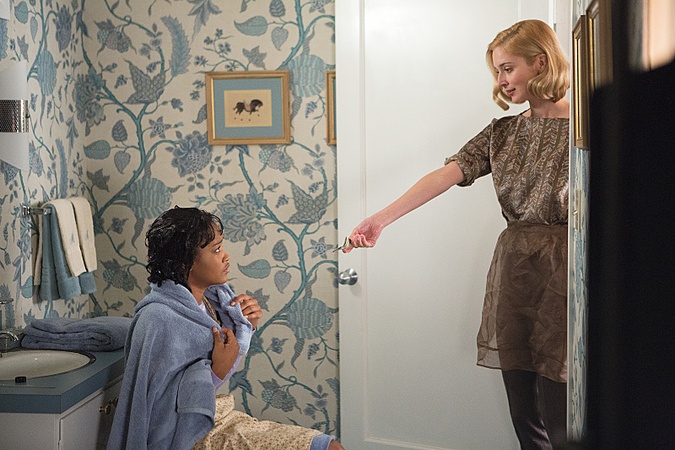