A leaked memo from the New York Daily News‘ deputy entertainment editor thanks the staff for “keeping our stories SEO strong with the * Robin Williams dead at 63 *” headline. Starting today, staffers can “scale back on the robot talk (meaning no death header) just as long as the stories continue to *start* with his full name and include buzzy search words like *death, dead, suicide, etc.*” While the memo may not be in the best taste, the SEO strategy is working. Just look at the Google results. (Jim Romenesko)

One reason why BuzzFeed is trying to shift its strategy? “There is another reason for BuzzFeed and other media companies to focus more on the stuff they’re creating than on where people read it. Just as readers are fickle, so are the tech companies that send readers their way. It only takes a small tweak of the algorithm and stories disappear.” (The New York Times)

But then again, BuzzFeed seems to be making some stories disappear all by itself. According to Gawker, over 4,000 stories have been deleted from the site. And nobody from BuzzFeed has commented. (Gawker/FishbowlNY)

And Twitter isn’t just being used to call out instances of plagiarism. People are using the social network to call attention to “the way young black men are depicted in the news media” with hashtag activism and to collectively mourn the death of Robin Williams. (The New York Times/The New York Times) 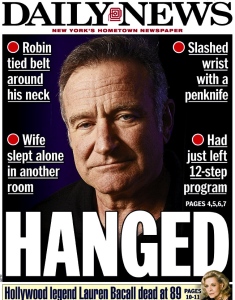