Look, you probably should be watching Outlander because it is about the struggles of women throughout time and also a really interesting examination of whether or not kilts are sexy. I fall on the not sexy side of the spectrum. They’re a garment that always reminds me of the Valley of the Dolls character that shrieks “your dingle is blowing in the breeze!”

So that is my loss.

But I do think Outlander is worth watching because it’s a female narrative set during WWII and mid 18th century Scotland, two periods which features woefully few female narratives. I can think of so many movies and shows about WWII set from male perspectives that they’ve all sort of blurred into an all encompassing vision of a man smoking a cigarette while perched on a tank growling, “I’m a soldier.” I can think of precisely three movies about 18th century Scotland – Rob Roy, Braveheart and Highlander – in which women serve mostly as decorative, sad-eyed props.

The show begins with Claire, a WWII army nurse, performing surgery on a man, and then, drenched in his blood, stepping into the sunlight when it’s announced that the war is over! Someone thrusts a bottle of champagne into her hand which she swigs directly from the bottle. This feels a little over the top in establishing that Claire is a strong female character – again, she is covered in blood and swigging champagne from the bottle, when champagne is the one beverage you cannot swig from a bottle effective (it will fizz and splutter everyplace) – but it’s possible. I can get into it.

And then we flash forward to the present day, or at least the near future Claire is on a second honeymoon in Scotland with her husband Frank, who has been working for army intelligence. They’ve seen each other a grand total of 10 days in the past five years. Frank, who is about to begin work as a Professor at Oxford, decides that the best way to catch up is to tell Claire all of the interesting historical facts about the area. Frank is tweedy and shouts historical tidbits in an authoritative voice, so I fell in love with him immediately.

After jumping up and down on the bed (literally, not a metaphor) at the Scottish inn they’re staying at, they explore the ruins of Caste Leoch. There, Frank goes down on Claire, and it’s nice. Good for her.

It’s kind of boring for a bit after that. Claire gets a tea leaf reading from the innkeepers wife that says that she’s going to meet strangers, one of whom will be her husband, and that she’ll have another love. Frank and she explore some more, Frank tells her that it’s okay if she had sex with someone else during the five years they were apart (I like Frank), they have sex some more and then explore some ruins. There, they witness a pagan ceremony and then Claire returns to the site of the ruins to get a forget-me-not.

AND THEN THERE IS TIME TRAVEL TO THE 18TH CENTURY.

I’ve always thought that an enormous downside of spontaneous time travel was that, as a woman, in pretty much any era but the past 100 years your only option for survival without a family would be to prostitute yourself. On the upside, you would be very healthy and you would likely have all your teeth, so you could command a high price. Except in this show, everyone has good teeth, because they’re actors, so that’s out. You would get syphilis, though, so here is how to make homemade penicillin.

I have thought about this so much that sometimes when I read weird, personal tidbits about historical figures like “The Duke of Wellington had a pet frog,” I alway think, “that will come in useful if I ever spontaneously time travel and my best option for survival is to try to become the Duke of Wellington’s mistress. I am going to shout, ‘I love frogs,’ at him, and then he will love me.”

I’ve thought about this a lot.

Claire is almost immediately – within seconds! – raped by an English officer named Jack Randall who looks exactly like her husband Frank. This confirms all of my fears about spontaneous time travel. Fortunately a Scotsman named Jamie intervenes. We later learn that he’s been flogged twice because he tried to stop Jack from raping his sister. So it’s kind of set up early that the Scots are good people, and the English rape people for no reason whatsoever – although as Claire later, accurately, points out, “Is there ever a good reason for rape?” No! There is not.

Claire is taken by this band of Scotsmen to Castle Leoch. She’s greeted by Mrs. Fitzgibbons who points out that 1) Everyone smells terrible, which is a true thing about history, even though these people have lovely teeth and 2) Claire is not wearing enough clothing. She’s later able to explain that away by pointing out that she was almost raped, so that makes sense, and that she’s wearing a bra because “they are from France.” Claire is a plucky, fast-thinking lady. And she’s able to get into Mrs. Fitzgibbons good graces by treating Jamie’s wounds, because she has medical skills.

In spite of that, everyone still thinks she’s a British spy. She tells them she’s a widow from Oxfordshire (which is pretty much the truth) and that she needs to go back to Inverness – where she hopes she can return to the glad that will allow her to spontaneously time travel back to her own age. She’s told there should be a… carriage? Wagon? Transport system?… going there in five days, and she can return, which gives her just enough time to mingle with the local witch and witness a trial where a man wants his daughter beaten for “loose behavior.”

Her return proves, however, more difficult than she expected as the episode ends with Claire being told they have need of more healers at the castle!

Jamie is shirtless a lot, too, if you’re into that. 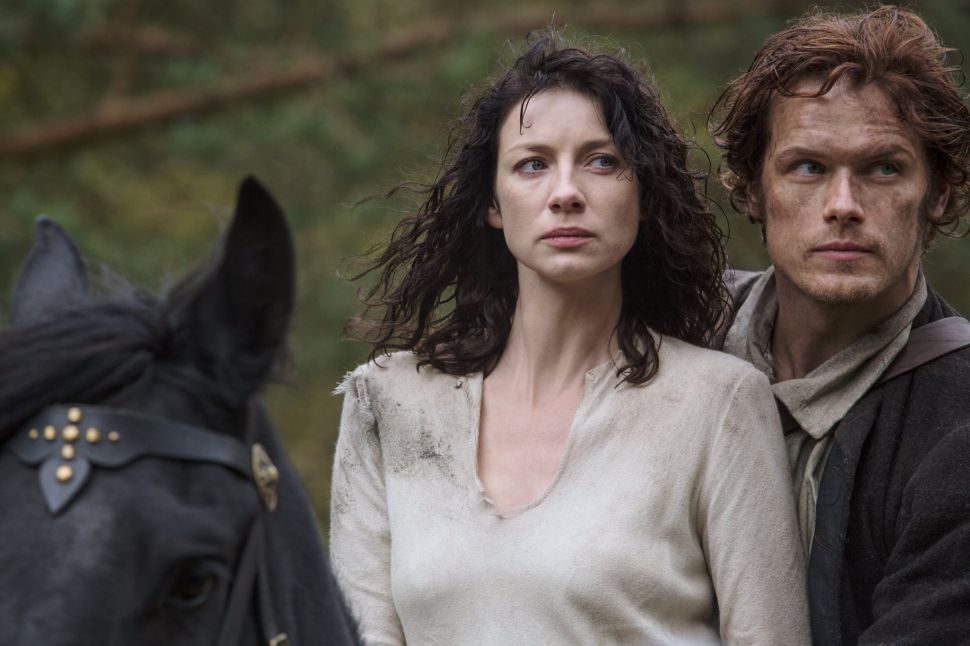