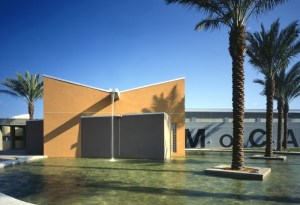 After months of argument, accusation, mediation and headaches comes a schism: the board of the Museum of Contemporary Art North Miami has packed up shop, moved out of the city-owned former home, and relocated its staff into a new space in the Moore Building, an historic spot in Miami’s Design District, where it will open and operate a new, independent institution.

The board announced the move in a statement given to the Miami Herald.

“The Board sought an on-site expansion at our former home in North Miami for more than a decade, as the demands of our collection, program, and audiences grew and our museum gained international acclaim,” co-chairs Ray Ellen Yarkin and Irma Braman said in the statement. “The Moore Building has a rich history of presenting cultural events and contemporary art, and our interim facility allows us to continue serving our audiences throughout Miami-Dade County and beyond as we plan for a permanent location.”

The Sunshine State brouhaha began when the board vocalized intentions to move its 600-piece collection to the Bass Museum in Miami Beach, prompting city officials to vow to keep the institution in North Miami. MOCA fired back with a suit alleging breach of contract due to lack of funding. Then, the city appointed an interim director, Babacar M’Bow, to lead the institution after Bonnie Clearwater departed to lead Nova Southeastern University’s Museum of Art in Fort Lauderdale. This, despite the fact that the board already had an interim director, former New York gallerist and editor Alex Gartenfeld, who will travel with staffers to the Moore Building and remain interim director.

The departure from North Miami leaves two things up in the air: the fate of the 600-work collection, which is currently in storage as both the board and the city claim control; and the museum’s name, which will likely not follow the exiles or stay with the shell of an institution. MOCA is most likely no more.

Miami Design District Associates, the real estate fund that owns the Design District, will not charge the former MOCA staffers rent for its 25,000-square-foot space in the Moore Building.