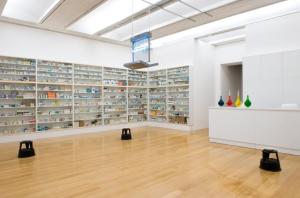 “Like some other art mavens I know, I thrilled to van Gogh when I was young, and then, with the snobbery of the insecure tyro aesthete, I took to disdaining him for his popularity.” Peter Schjeldahl sees all seventeen of the Met’s van Goghs, and battles with his demons. [The New Yorker]

A show of early Romanticists at the Morgan Library & Museum: “For all the broad daylight in this show, several of the landscapes do achieve a darker mood of Byronic brooding, sometimes enhanced by working on paper tinted buff, gray or blue.” [WSJ]

Somebody’s poking holes in a Banksy in Cheltenham! [BBC]

Esther Bell will assume the role of curator of European painting at the Fine Arts Museum of San Francisco. [Artforum]

Damien Hirst’s new show, “Schizophrenogenesis,” at Paul Stolper gallery in London, is very pharmaceutical. That is, it will unveil the artist’s new sculptures and prints that go back to one of his favorite themes: the wonders of Xanax bottles and the like. Start popping those pills. [The Art Newspaper]

And here’s a handy guide on how to meet a girl as a gallery opening. [Complex]