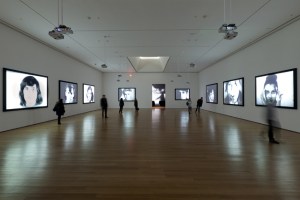 Cory Arcangel pens a long essay on the rare and mostly unheralded Andy Warhol computer graphics, ones he produced using primitive models in the 1980s. [Artforum]

The art world gets Rocky Mountain high at the Aspen Art Museum’s ArtCrush benefit auction: “Governor John W. Hickenlooper felt the buzz when he later exclaimed, ‘I’m going to get you all some legal marijuana!’ quickly recanting, ‘Don’t tweet that!'” [Artforum]

There’s fungus among us! Or, well, among the paintings at the Louvre. [The Art Newspaper]

The Style Section’s Critical Shopper column goes to Damien Hirst’s new boutique Other Criteria, a gift shop for the theme park ride that is Damien Hirst. You can buy a bass guitar the artist designed with Flea, of the Red Hot Chili Peppers—”garish and awful, both intrinsically and extrinsically blank”—or a trash can covered in Mr. Hirst’s famous spots—”a salesclerk told me that because of its placement on the floor, some people try to throw trash in it.” [NYT]

The National Gallery in London began allowing photos last week, and people are not pleased. Why are they not pleased? Selfies. [The Telegraph]

Maximo Caminero—the man who smashed on the floor a Han dynasty vase painted over by Ai Weiwei—has plead guilty. He will complete 100 hours of community service. He’s going to be teaching painting to children. [NYT]

A look inside the process of digitizing the giant trove of Andy Warhol’s film reels, a mammoth project being undertaken by MoMA and the Andy Warhol Museum in Pittsburgh. [NYT]