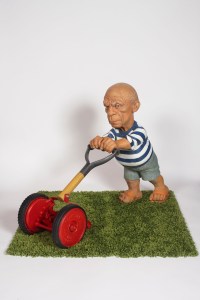 On the pre-war and wartime Berlin of Marsden Hartley, the subject of a new exhibition at LACMA. [WSJ]

There’s one silver lining of the mess of the Corcoran getting unceremoniously split apart: the museum is now a part of the National Gallery, so it will no longer charge for admission. [The Washington Post]

Lucien Freud’s collection of works by his friend, Frank Auerbach, is on display at the Tate Britain. What if it just… stayed there forever? [The Guardian]

James Frey—the one-time co-owner of Half Gallery and author of the fabricated memoir A Million Little Pieces—will turn Elliott Arkin’s sculptures of garden gnomes into a children’s book. [The Art Newspaper]

“512 Hours,” Marina Abramovic’s 64-day performance at Serpentine Gallery in London, has now ended. Missed it? You can watch her video diaries, which remind me of those video confessionals on The Real World. [Marina Abramovic Institute]

Let’s return to that story from last week, the one that involved, as we put it, “an eviction, tribal masks, meth pipes, a ‘possible bomb device’ and a missing Picasso worth one million dollars.” Turns out the Picasso is not worth anything, because it’s fake. The meth pipes, though? Very real. [The Daily Courier]