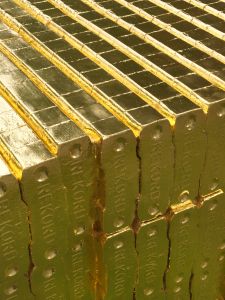 Alicja Kwade’s KOHLE (1T Rekord) at the “Gold” exhibition at the Bass Museum of Art.

Holland Cotter looks at a compendium of the artist Ray Johnson’s letters, entitled “Not Nothing.” [NYT]

“Gold,” a new exhibition at the Bass Museum of Art in Miami Beach, displays gold-inflected works from a dozen different artists. [WSJ]

The English have discovered VFiles correspondent Casey Jane Ellison and her dry web series, “Touching the Art.” [The Guardian]

“Apple may well be the only tech company on the planet that would dare compare itself to Picasso.” [NYT]

Photography is now allowed inside the National Gallery in London. Look out for selfies. [Art History News]

Jerry Saltz ends his review of the Garry Winogrand retrospective at the Met with an impassioned plea to take seriously the pictures we share online: “The whole world is now filled with incredible images—especially on Instagram and other social networks—that owe something to Winogrand’s, documenting life, change, and all the rest.” [New York Magazine]