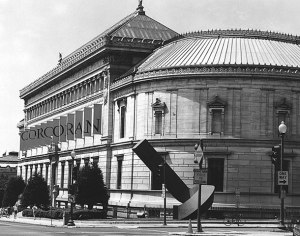 Shepard Fairey is painting a mural on the giant wall space that faces Houston Street and The Bowery. Last time he painted on that wall, people kicked holes in it. He’s back anyway. [Bowery Boogie]

Stop what you’re doing and spend your next hour watching these two critics look at the same painting for an hour. [artnet]

Francesca Grillo, who was accused of stealing £685,000 from her old boss Charles Saatchi, is following her former employer into the art game. Get excited for something “like an abstract Factory—a bit like what Warhol did.” [The Guardian]

Researchers ask: Could computers put art historians out of work? Probably not. We probably still need art historians. [The Telegraph]