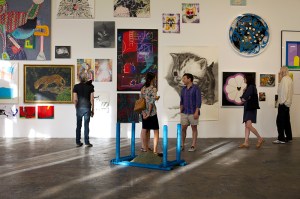 Works in “Another Cats Show” at 356 Mission Gallery in Los Angeles. (Courtesy 356 Mission)

Roberta Smith writes 1400 words about the tiny El Greco show at The Frick—just two canvases!— including these seven: “The show is, simply put, a stunner.” [NYT]

Gagosian Gallery’s outpost in Rome will haul some works a few blocks down the street to the Galleria d’arte Moderna, which is building an extension to exclusively house works on loan from Gagosian. Expect some Franz Wests outside, too! [The Art Newspaper]

You’d think something called “Another Cats Show” would be exactly that, but Los Angeles gallery 356 Mission managed to bring together 300 pieces, including a John Baldessari cat-themed work and Cory Arcangel’s beloved cat videos. Oh, and what about the prior feline-inflected show that merited using the word another? That would be the previous exhibition at 356 Mission, a solo show by Alex Katz. [LA Times]

What happens when your deadbeat dad, a gunslinging bank robber and feared Lower East Side thug you never knew, turns out to be a muse for Andy Warhol, and you go see your father’s Warhol portrait at the Queens Museum? Find out here! [NYT]

That guy who vandalized the until-then pristine and spotless show “Jeff Koons: A Retrospective” might be the Canadian artist Istvan Kantor, and he might have celebrated his stunt by drinking on the Lower East Side. Where exactly do you go boozing down there after vandalizing a museum? Like, Welcome to the Johnsons? [Hyperallergic]

Look, it’s a Friday in August, Labor Day is next week, everyone’s out of town—if there were ever a time to look at a slideshow of the “Top Ten Picnics In Art,” it’s now. [The Guardian]