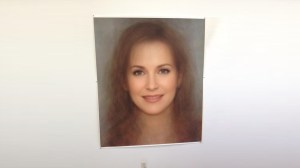 Last year, Richard Price made Jerry’s Girl, a print that’s purportedly a composite of all of Jerry Seinfeld’s girlfriends on the show that bears his name. Yada yada yada, it’s now hanging in Southampton, basically a stone’s throw from the comedian’s summer house. [Page Six]

Holland Cotter on “Material Histories: Artists in Residence 2013–14” at the Studio Museum, in Harlem, and the ways it’s indebted to David Hammons. [NYT]

And Ken Johnson checks out “What’s Up, Doc? The Animation Art of Chuck Jones” at the Museum of the Moving Image. Here’s his take on Wile E. Coyote’s attempt to catch Road Runner: “This is the eternal quandary of desire in pursuit of a quarry it sees as imbued with some transcendental quality. In real life, when desire achieves its goal, the magic sooner or later expires.” [NYT]

“Probably as long as there has been war, there have been war artists whose interpretations of the battlefield feed cultural understanding of conflict.” [NYT]

Hey, it’s Friday, so you know what? Here’s the definitive list of the top ten most amazing codpieces in art. [The Guardian]