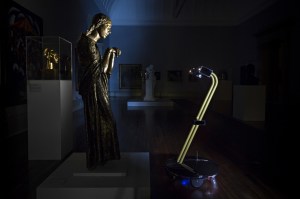 Robots will give nighttime visitors to the Tate Britain museum tours. The future! [The Guardian]

If you’re in Paris right now, you might be the only person in Paris, because it’s August and that city is a ghost town, you can sign up to have John Baldessari put your name in lights over the, um, City of Light. [Le Monnaie de Paris]

Here is a very cute card game where you can have Cindy Sherman go head-to-head with Francis Bacon. [The Guardian]

In these dark days with nearly four years until the next World Cup, here’s an in-depth look at an artist who paints football players in the style of Old Masters. [The Telegraph]

Among the millions of wonderful things Robin Williams did in his lifetime, let’s remember when he partnered with Paddle8 to curate an exhibition with his son, Zak Williams, the co-founder of Chelsea gallery Mallick Williams & Co. Rest in Peace. [The Hollywood Reporter]