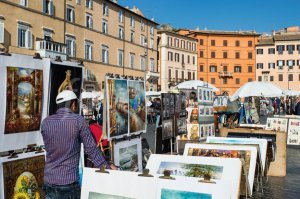 After banning vendors near tourist traps like the Colosseum, Roman government officials are now fiercely regulating the number of street artists allowed to hawk their paintings to visiting sightseers. Permits will be handed out according to technical skill, to be judged by a panel of experts. [The Art Newspaper]

“Some pictures depict mysteries; others have mysteries attached to them. Caravaggio’s ‘The Taking of Christ,’ a painting that now hangs proudly on a wall in the National Gallery of Ireland, fits into both categories. For almost two centuries it had gone missing.” [WSJ]

Shepard Fairey says that in New York, “artists are screwed now” and goes on to elaborate: “The reason why LA is becoming a hub is because LA still has affordable spaces for artists to have studios.” [Page Six]

Competing exhibitions of J. M. W. Turner and John Constable dredge up the bitter rivalry between the two British artists. [The Guardian]