If, when walking through Queens this summer, you stumble across a brightly coloured food cart frantically serving warm zucchini bread and spicy beef tacos, do not wearily roll your eyes and trudge on. This is not a roaming export from Smorgasburg or a lost Soho vendor. This unique and wildly popular van is part of a summer meals programme that aims to provide underprivileged children with free meals throughout the summer holidays.

Summer vacations should rightfully be a time of unbridled fun, but for many children they are tainted by the loss of two free meals a day. Across America, more than 21 million children use meal plans, but during the summer break, the number drops to a scant three million. In New York itself, up to 75% of students enrolled in public schools are eligible for free meals. The trucks, which are run by a programme pioneered by the New York Department of Education in collaboration with Share Our Strength’s campaign, No Kid Hungry, are part of a concerted effort to ensure that these children consistently get the support that they deserve, even when school is out.

The first truck was put on the street a couple of years ago, and this year there are four serving in both Queens and the Bronx. Their growing impact is tangible. In 2012, 122,000 meals were served out of trucks, whilst in 2013, it had grown to 320,000, according to the Daily News. This summer, each truck serves on average 550-950 meals a day.

The food, which is made without additives and sweeteners, is all freshly prepared and presents a whole range of options. Children are offered grilled chicken dippers, black bean and corn salad and fresh watermelon. And for the sweet-toothed among them, treats such as peanut-butter and jelly sandwiches are also available.

The four refrigerated food trucks serve lunch from 10:30 a.m. to 3:50 p.m., Monday to Friday at Orchard Beach in the Bronx and seven days a week at Flushing Meadows Park Zoo in Queens and the Queens Main Street Library.

Commenting on the success of the vans, Eric Goldstein, CEO of the department’s Office of School Support Services said, “By bringing the food to them we’re able to extend our reach in ways that previously were unattainable.” 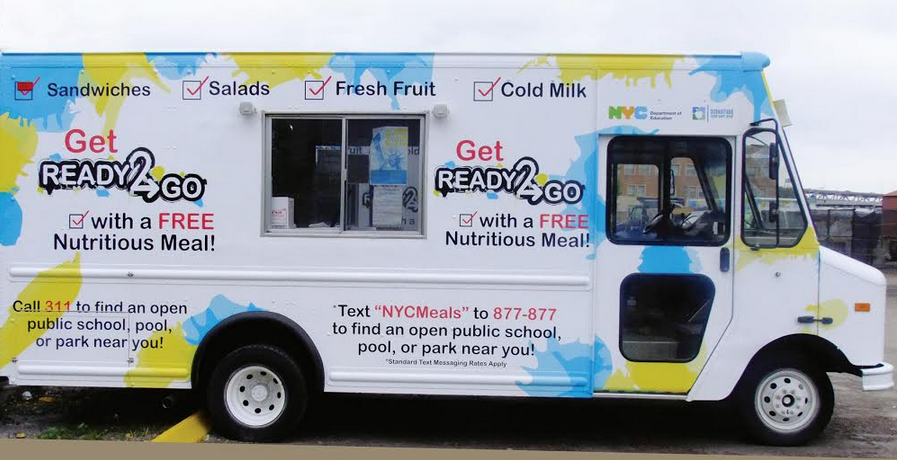