Story time! Back when I was in college I lived in an off-campus house with six other dudes. Naturally, in such close quarters, it was expected that you keep up the appearance of utmost masculinity. One day, we got a letter in the mail marked “COPYRIGHT WARNING.” Basically, the letter was from the government informing us that someone had been caught torrenting a movie at our address, and any other violation would result in severe punishment. That person was me. The movie was Love, Actually. I was mocked endlessly. Moral of the story: torrenting is bad, kids! (So is Hugh Grant’s acting, btw).

Apparently (despite my advice) people still love pirating movies and TV shows across the nation, whether it’s because it’s so damn easy or the thought of being a modern day internet pirate is so damn attractive. The good people at Movoto crunched some numbers, and drew up some handy maps highlighting the most pirated TV shows by state.

And my college story is happening all over again!

With all the awesome TV options out there (Game of Thrones, Penny Dreadful and 24 were the three most torrented) New York got caught pirating Beauty and the Beast. Fucking Beauty and the Beast?! Not even the Disney movie, but the stupid CW show starring Lana Lang from Smallville. Take another look at that map up there and you might notice New York is the only place that fiends for Beauty and the Beast torrents. New York, we were supposed to be one of the cool kids!

So basically, while most of the country parties like this…

It could be worse, I guess. New Hampshire’s number one pirated show is Crisis. I’ve never seen it, but I assume it is about realizing you live in New Hampshire. 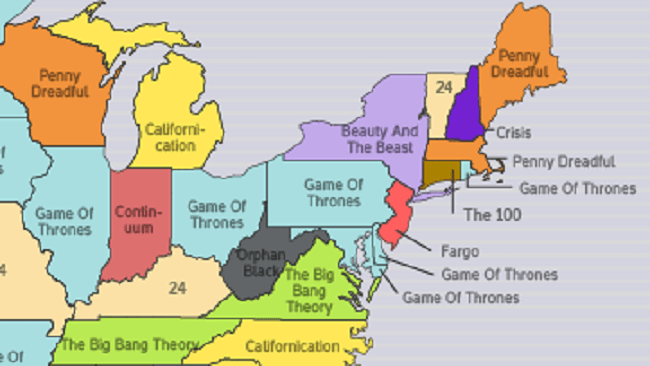