It had been quite a fortnight, the last week of July and the first week of August 40 years ago. Along the Senate-side entrance to the America’s temple of democracy, 50 Capitol police stood formation whenever Vice President Gerald Ford was presiding over the upper chamber. They surrounded his limousine in a wedge now wherever he went, this in addition to his normal Secret Service complement.

On the House side, on Saturday night July 27, 1974, in their cathedral-ceilinged hearing room, after a full day of parliamentary wrangling, the Judiciary Committee ventured its first vote on an article of impeachment. Seventy-one percent of its members, from both parties, voted in favor. That meant a trial in the Senate to remove Nixon from office was a near certainty.

Chairman Peter Rodino gaveled the proceedings to a close. The White House had tried and failed, in a last ditch gambit of just the sort that brought about these impeachment hearings in the first place, to convince the public that the Italian-American congressman from the mean streets of Newark was connected with the mafia. He wasn’t; far from it: in fact, he had been so scrupulously fair in running the proceedings that he no longer made public appearances back home in his district. “They want a bell-ringer of a speech against Mr. Nixon, and I just can’t give it.”

So when Rodino, after the vote, immediately ordered the hearing room cleared, people trusted him. He was clearing the room because of rumors that an airplane under the command of Richard Nixon was set to crash into the Capitol. It was an eerie foreshadowing of September 11, 2001, and people believed it was possible because, regarding their president, it was believed that just about anything was possible. And that was all before the smoking gun.

The phrase “smoking gun” referred to the way the president’s diehard defenders on the committee were demanding proof from Nixon’s own lips that he knew about, and abetted, the conspiracy to cover up White House ties to the burglary of Democratic headquarters in the Watergate office complex on June 17, 1972. They insisted, in the words of Charlie Wiggins (R-California) that in the committee’s 38 volumes of evidence, that there was “not a word, ladies and gentleman, of presidential knowledge and awareness of that wrongful act.”

That proof came on August 5, when the president addressed the nation and admitted he had held back evidence from both the House Judiciary and his lawyers—his words on June 23, 1972, recorded on his own Oval Office taping system, recommending he order the FBI stand down from its Watergate investigation on the lie that it might expose top secret CIA activity. George Will called it a “smoking howitzer.” Rep. Wiggins, choking back tears, was among those who now said, “The magnificent career of Richard Nixon must be terminated voluntarily.” Republican National Committee Chairman George H.W. Bush said so, too.

Ronald Reagan, the governor of California, widely believed to be gearing up for a presidential run, was almost alone among prominent political voices that said the president shouldn’t resign. He released a prepared statement in which he passively voiced the curious conclusion that, “For the first time, it has been revealed that neither the Congress nor the American people have been told the entire truth about Watergate”; in fact, everything Nixon had been saying about Watergate had been serially revealed to be untrue for well over a year at that point.

Reagan said Nixon should let the process go to trial in the Senate. According to The Washington Post on Wednesday morning, August 7, that was exactly what would happen: “NIXON SAYS HE WON’T RESIGN.” But on Wednesday night, a delegation of Republican House and Senate leaders and Barry Goldwater visited the Oval Office. “He was serene and he was most amiable,” Senate minority leader Hugh Scott reported; he seemed to be referring to insistent rumors that a desperate Nixon might yet deploy the military to stay in power. But they had made a political argument to a consummately political man: that if he let this thing advance to a Senate trial, he would lose.

Reluctantly, Nixon acceded. The next night, at 9:01 p.m., with the public areas outside the White House more crowded than they had been even on the night of November 22, 1963, people shouting “Jail to the chief,” comparing rumors about how the military coup would go down, and cheering the cars that honked as they passed by (“Honking for impeachment” had been a summer political fad: the 1974 equivalent of a hot Twitter hashtag), the president went on TV and announced that, effective at noon on Friday, August 9, he would not be president any more.

The Associated Press reported on the new president’s first day: “The commuter at 514 Crown View Drive in Alexandria, Virginia, awoke shortly before 6 a.m. and, in baby blue summer pajamas, boiled for his tea, cut the melon, and toasted the English muffin. Still in his pajamas, he popped his head out the front door looking for the morning paper … It was a new day at 1600 Pennsylvania Avenue, zip code 20050. A new, new day.”

Gerald Ford had promised in his inaugural speech, “We will have a candid administration. I can’t change my nature after 61 years.” Newsweek said his ascension “felt as cool and cleansing to a soiled capital as a fresh Lake Michigan breeze.” Time noted “a chief executive who worked in his shirtsleeves, who said what he meant and meant what he said, who by his honesty and accessibility has swiftly exorcised the pinched ghosts of the Nixon era.” Time’s White House columnist Hugh Sidey reported “a feeling that the American presidency was back in the possession of the people.”

And America decided it had found its innocence once again.

Rick Perlstein is the author of The Invisible Bridge: The Fall of Nixon and the Rise of Reagan. He also wrote Before the Storm: Barry Goldwater and the Unmaking of the American Consensus, winner of the 2001 Los Angeles Times Book Award for history, and the New York Times bestseller Nixonland: The Rise of a President and the Fracturing of America (2008). He is a former columnist for The New Republic and Rolling Stone, and lives in Chicago. 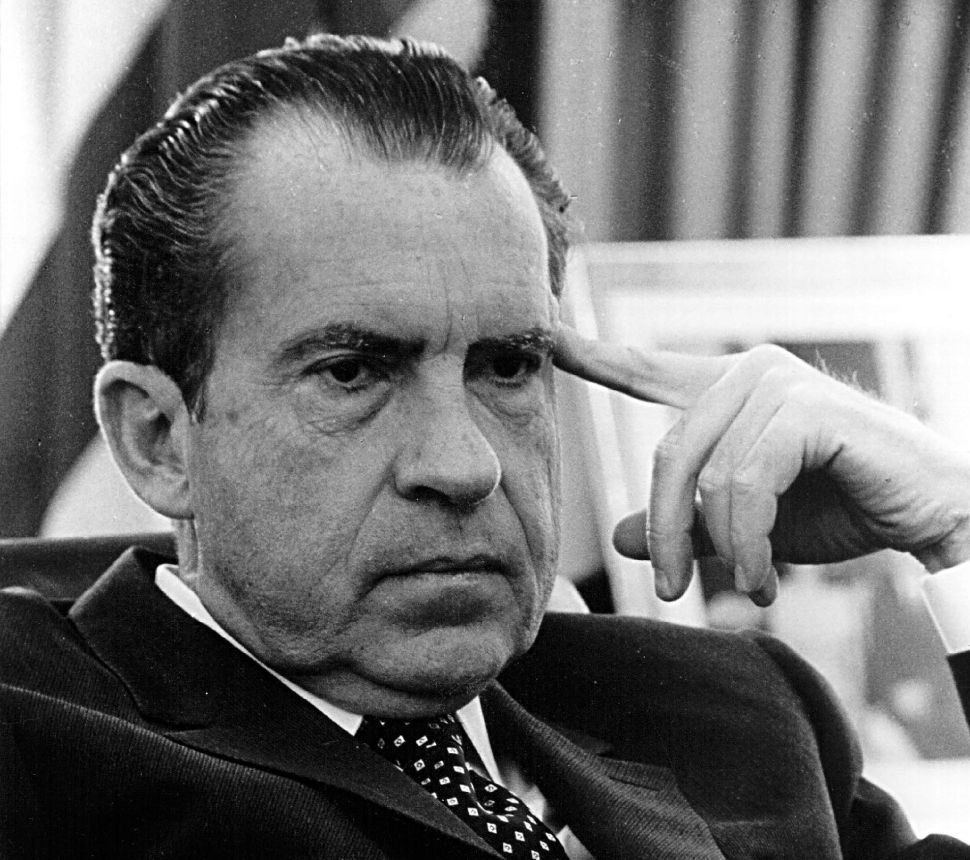