Hundreds of Holocaust survivors and descendants of survivors bought an ad in Saturday’s New York Times condemning what they referred to as “the massacre of Palestinians in Gaza and the ongoing occupation and colonization of historic Palestine.”

“We are alarmed by the extreme, racist dehumanization of Palestinians in Israeli society, which has reached a fever-pitch,” said the statement, which ran as a half-page ad and was sponsored by the International Jewish Anti-Zionist Network, founded in 2008.

The statement was signed by more than 300 people and issued in response to a recent ad by Elie Wiesel published in the Times, The Washington Post and The New York Observer, among other prominent news outlets, comparing the actions of Hamas, the militant Palestinian organization, to the Nazis. The Wiesel ad stimulated much controversy and attention—it was rejected by The London Times, as exclusively reported by the Observer, and was then accepted by The Guardian, to the horror of many of that paper’s readers.

“Furthermore,” the letter continued, “we are disgusted and outraged by Elie Wiesel’s abuse of our history in these pages to justify the unjustifiable: Israel’s wholesale effort to destroy Gaza and the murder of more than 2,000 Palestinians, including many hundreds of children.”

The strong words directed at Mr. Wiesel, perhaps the world’s best-known survivor of the Holocaust and thought of by many as the very conscience of genocide, were surprising to those supporting the Wiesel ad.

Rabbi Shmuley Boteach, whose organization, This World: The Values Network, sponsored Mr. Wiesel’s ad, was shocked by the attack on Mr. Wiesel.

“Elie Wiesel is not only the most famous Holocaust survivor in the world and a man who has taught billions of people about the Holocaust, he’s also one of the most respected people alive,” he said. “The attack on him for supporting the basic right of Jewish self defense and the prevention of a second Holocaust at the hands of a self-declared genocidal terror organization whose charter calls for the annihilation all Jews is shocking in the extreme.”

But Raphael Cohen, a signatory of the letter and a member of the International Jewish Anti-Zionist Network, said in an interview with the Observer that Mr. Wiesel’s high profile was a motivating factor behind the publication of the letter.

The names of all the signatories appear in the advertisement and also on the International Jewish Anti-Zionist Network website. The Observer confirmed several of their identities, including H. Richard Leuchtag, who is the author of several books and other works in the field of molecular neurobiology. Mr. Leuchtag declined to discuss his reasons for signing the ad but described having been “born in Breslau, Germany (now Wroclaw, Poland). In November 1938, my father was picked up on the street and transported to the Buchenwald concentration camp. Due to my mother’s persistent efforts and the fact that we had visas to Panama, my father was released after two weeks. We spent two years in Panama and entered the US in 1940.” 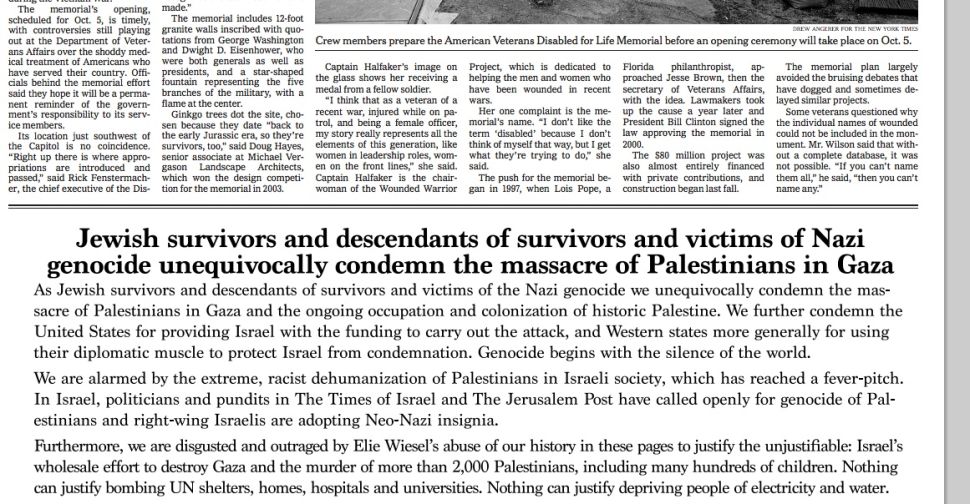