Ever since Chinese developer Greenland bought a majority stake in the Atlantic Yards development earlier this year, changes have been afoot at Forest City Ratner’s 15-tower development. Among them, a commitment to finish the project by 2025—9 years after the completion date that FCR had once projected, but 10 years before the most recent timetable—and an agreement to fast-track the affordable housing component of the project by constructing two 100-percent affordable buildings in exchange for a $11.75 million cash subsidy for each of the buildings.

And this morning, it became clear that changes to the project would not only be of a financial nature. Curbed revealed that the developers were taking a different tack with the remaining buildings, making a sharp turn away from the tower-in-the-park-style, urban look that had defined the project up until now. Even the name has been changed from the gritty, industrial “Atlantic Yards” to the bucolic “Pacific Park.”

The developers have also brought on a new architect—COOKFOX—to execute this vision; COOKFOX will design the next two towers to be built after SHoP Architects’ B2. Gone, too, is the confusing B1, B2, B3 B4 jargon; COOKFOX’s two buildings will be 535 Carlton Avenue and 550 Vanderbilt; B2 has become 461 Dean Street and SHoP’s next building will be 30 6th Avenue. (We have yet to receive a response from a Forest City spokesperson about whether or not SHoP is still designing B4 and if so what the building will be known as.)

An eight-acre park—the development’s new namesake, to be designed by Thomas Balsley Associates—will also be built over the rail yard in High Line-like fashion. Renderings of the COOKFOX buildings show street-level views of brick and stone-clad buildings in leafy, green streetscapes, a stark departure from the distant, glassy towers featured in previous renderings.

“Our work is organized around a concept called ‘Biophilia,’ which simply means that people feel better when they are connected to nature,” COOKFOX wrote in a release about the two towers they will design. As has been previously reported, the next towers will be built using traditional, rather than modular, construction, which turned out in the case of B2 to be more expensive and time-consuming than expected.

The language of eminent domain, which had long painted the rail yards and surrounding streets as a blighted area in need of rejuvenating development, has also vanished. Now, the developers boast of the site’s proximity to some of the most desirable neighborhoods in Brooklyn—”situated in the intersection of the thriving Fort Greene, Clinton Hill, Boerum Hill, Park Slope and Prospect Heights neighborhoods.”

“The chance to weave the new Pacific Park and residential buildings into the tree lined environment of the neighboring streets is a responsibility that we take very seriously,” writes COOKFOX. “The two buildings at Carlton and at Vanderbilt are designed around a vision of weaving new development into the existing neighborhood with a restrained approach to its planning, massing, and height.”

Whereas once Atlantic Yards was characterized as a catalyst for revitalizing Brooklyn, Pacific Park is now being described as drawing from the borough’s allure and authenticity.

As Thomas Balsley, founder and design principal of Thomas Balsley Associates, wrote in a release, “This is an extraordinary opportunity to create an open green space at the center of five of Brooklyn’s most vibrant and dynamic neighborhoods. Pacific Park will transform a railyard – a gap in the urban fabric–into a destination for all New Yorkers.” 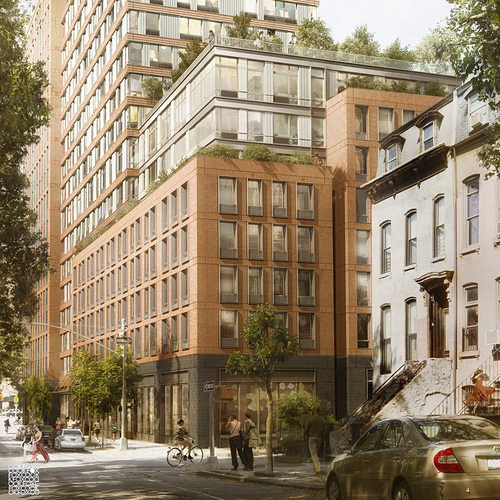