While Senator Charles Schumer took some shots at the cities vying against New York to hold the 2016 Democratic National Convention, the mayor of Philadelphia–a chief rival–played nice while he was in town Monday.

After a meeting of a U.S. Conference of Mayors task force at Gracie Mansion, Philadelphia Mayor Michael Nutter said he wouldn’t make his case for his city “while standing literally in the mayor’s backyard.”

“Every city has their highlights, has their strengths, and I am sure that Mayor de Blasio and his team will put on a very, very good presentation over the next two days. I plan to do the same on Wednesday and Thursday,” Mr. Nutter told reporters. “Ultimately, a committee will decide and we’ll go from there. So you know, I think of the moment I’m gonna wish my friend the best of luck — up to a certain point, and then we’ll do our best on Wednesday and Thursday.”

The Democratic National Committee’s Technical Advisory Group is in Brooklyn early this week to check out the borough and heard Mayor Bill de Blasio’s pitch that the convention should be held at the Barclays Center.

Philadelphia could have a bit of an edge because Pennsylvania is considered a swing state, though it has gone Democratic in presidential races since 1988. And New York has its own advantages — it’s said to be supported by former President Bill Clinton and his wife Hillary Clinton, who represented the state in the Senate and is thought to be a 2016 contender.

While other elected officials were cheerleading for the DNC in Brooklyn, Mr. de Blasio repeatedly refused to answer questions about the city’s bid for the convention during the Gracie Mansion press conference with a slew of other mayors, including Mr. Nutter. He dismissed the questions as “off-topic” — even when reporters sought to tie the issue to how mayors can work together while competing, or how hosting the event fits into their vision for addressing income inequality — and said he’d address the DNC bid tomorrow.

As Mr. de Blasio shot down a reporter’s question as a “nice try,” Mr. Nutter walked over to the podium beside him.

After the press conference, Mr. Nutter said there was a “passing acknowledgment” about the competition during the closed-press meeting of mayors from around the country.

“We have a great personal friendship and a great professional relationship as well,” he said. “Today was not about that at all — it was about income inequality.” 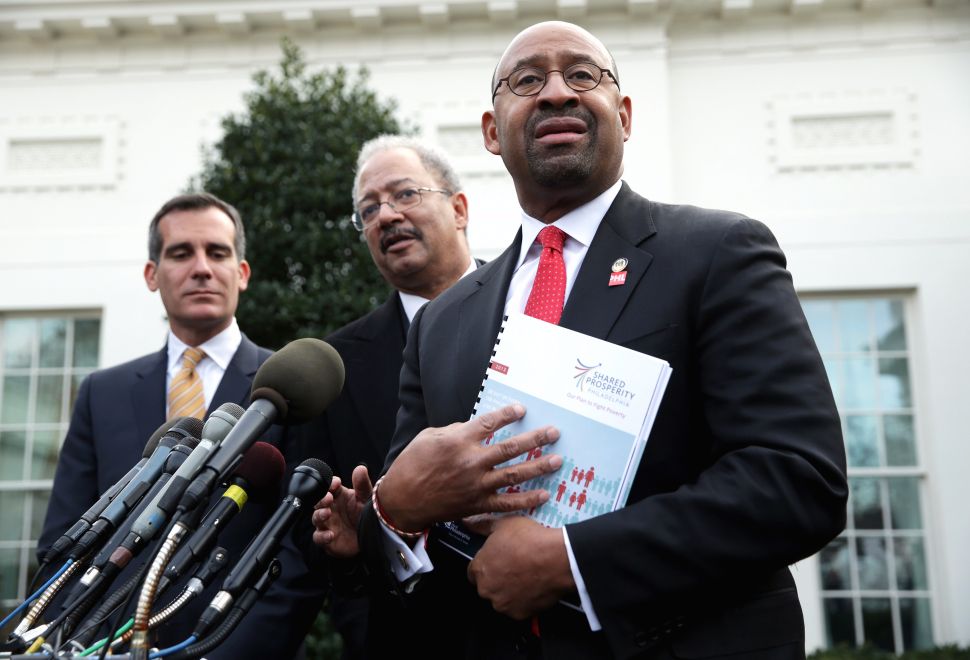