A topless woman walked into a bar. No one averted their eyes, staring and following her to a secluded table. As she and her date began to speak, onlookers gathered around, listening in unabashedly on their conversation.

The couple may have been at Fat Baby, a bar in the Lower East Side, but they were actors in a new immersive theater experience called Play/Date, a series of simultaneous one-act plays all centered around dating in New York. Now with only seven shows left, Play/Date, riding on the interactive theater trend that’s taking over New York, continues to hit the mark with its fresh, new material.

“It’s like a choose your own adventure book,” Blake McCarty, the force behind Play/Date, told the Observer. “You can sit in one place the whole night and watch what happens around you, you can move through the bar, following characters, or you can grab a drink and talk to your friends about your own dating life. All of those are appropriate and ostensible ways to experience Play/Date.”

Made of 17 one-acts and directed by Michael Counts, the theatrical experience takes place throughout Fat Baby’s three sections: the bar, the 1st floor, and the mezzanine, where actors in groups of no more than three lay their hearts on the line in the name of romance.

“There is something everybody could relate to here, for sure. I mean, the whole spectrum of sexuality or gender, no matter where you lie, there’s something here for you, an experience that certainly you’ve had at one point or another in your life,” actor Ryan Rickenbach said.

“The audience must attempt to see everything, while absolutely having to acknowledge that they can’t,” Mr. McCarty said.

Play/Date ticket-holders are not limited to stay at any one scene, but rather can meander through the bar, just like any other night, stopping by the actors underneath a spotlight for however long, or short, they want. Surprisingly, the actor’s voices, aided by microphones do not carry beyond their area, keeping the plays from overwhelming each other.

When they are not in the limelight, the actors meander through the crowd, stopping to chat or serve drinks. Many of the characters have social media pages on Instagram, Twitter, or Facebook, and post selfies and drunken tweets as the night goes on, adding to the voyeurism Play/Date encourages. The accounts are then wiped of the night’s festivities before each show.

“I am guilty of sitting in a restaurant and just wanting to know what folks are talking about, those little secrets that are happening between people. In Play/Date you’re allowed to be let in on these intimate moments in a way that feels comfortable.”

“I think it’s an experience that really mirrors what dating is like in NYC,” actor Sharon Counts, who performs in one of the night’s funniest sketches, eHarmony, said. “You know, you go around, you sample people and experience and if you like them you stick around for maybe another little while and if you don’t you move one. That’s very much what this experience is like. You get a sample platter.”

“It is absolutely a bit sexy, laugh out loud funny at times, and heartbreaking, which is in my mind exactly what its like to be dating,” said Mr. McCarty. 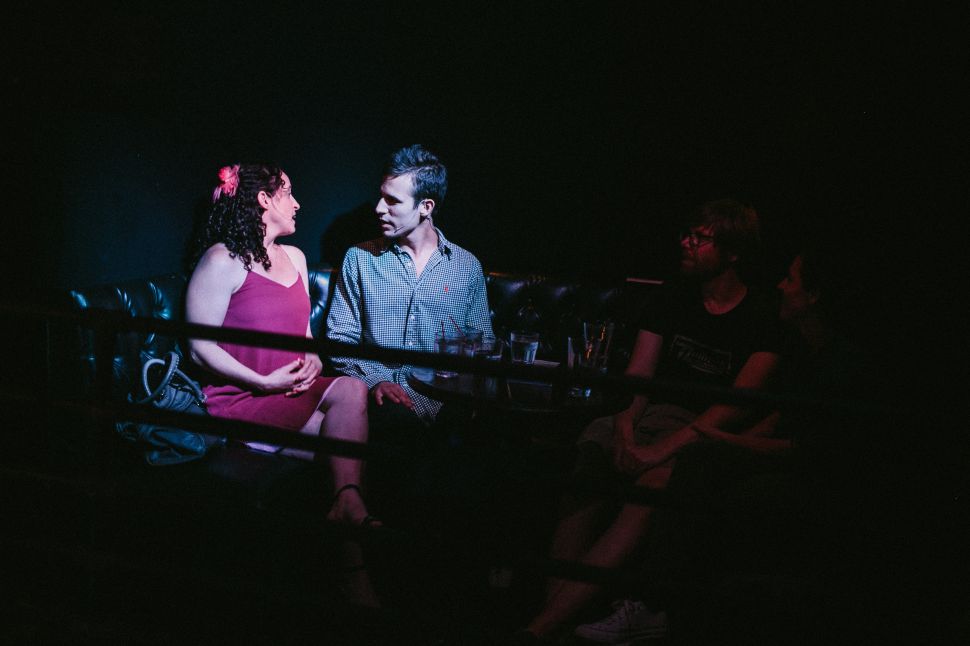