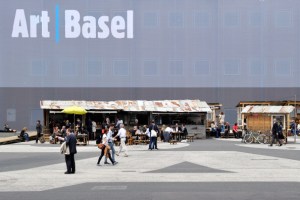 When we were in Basel, Switzerland last June, covering the art fair and all its attendant hoopla, we went to a party at this sprawling, impossibly opulent 18th Century estate. The revelers seems to gravitate toward a golden parlor room in one of the carriage houses that line the property, and they all were smoking Davidoff cigars. Why were they smoking Davidoff cigars? Because Davidoff is a sponsor of Art Basel, and Davidoff Cigars were being passed out for free alongside the tuna tartare canapes. Not a bad deal.

That deal, however, might get put out for good. The Art Newspaper alerted us to a report in the German-language Swiss paper Basler Zeitung that indicates a powerful lobby has supported legislation that would prevent tobacco companies from sponsoring major events, such as Art Basel. A similar law is already in effect across the European Union, and Swiss interior minister Alain Berset is a a powerful backer of this new one.

If it passes once the consultation period ends in September, there’s a good chance that ubiquitous cigar’s parent company, Oettinger Davidoff, would have to back out from its associate partner role in the fair.

We’ll use The Art Newspaper’s translation of the statement:

As the piece of legislation has yet to pass, Art Basel will “not engage in speculations about the implications of such a law could potentially have,” according to a statement from fair organisers. The fair hopes that the Basel-based tobacco company will “continue to be a partner in the future.”

Looks like the dealers and collectors will have to smuggle in stogies to Les Trois Rois all by themselves.