(Ed. note) ABC’s The Quest premiered last night, a mix between fantasy and reality where twelve real contestants are brought to a fictional place called Everealm. There they interact with actors and participate in challenges in an attempt to “save” the realm. The creatures, story, and adventure are entirely scripted. Nobody told that to our recapper. Ho-lee-shit. How are more people not fully recapping The Quest? Am I the only one that is impressed with the fact that ABC, partnered with an executive producer Mark Odesky (Lord of the Rings) and Elise Doganieri (The Amazing Race), opened up a portal to another world? That’s like, at least worth a Buzzfeed mention, no?

Oh well, guess its just me. Here’s the backstory: Everealm, a world other than our own, is under threat from Verlox the Darkness and his forces. Desperate, the Three Fates summon 12 Paladins and bequeath upon each of them a piece of the Sunspear, which is the only weapon that can defeat the darkness.

The twelve contestants (sorry, LOL, I mean Paladins) are brought on to the show to compete in a series of competitions that will test them both physically and mentally. Every week, one will be deemed unworthy by the The Fates, until the One True Hero remains. Without further ado, here’s the most pivotal moments from episode one, “The Quest Begins.”

All twelve Paladins receive their pleas from Everealm to help stop the forces of Verlox. Already, only ten minutes into the premiere, I’m filled with intriguing questions. Most importantly: how much does it cost to ship a letter between worlds? Are there stamps in Everealm? These are questions I’m going to have to keep on my mind as the series progresses. The Paladins are led through an underground tunnel that connects our world to Everealm. The producers are smart to not divulge where this tunnel is. Could you imagine the tourists?! Anyway, the contestants finally come across The Three Fates. “Be strong, or be banished,” they tell the Paladins. Wow…just…such good advice from The Fates. The ONLY thing I needed from this scene was better lighting but, hey, can’t change reality right? Be strong and also pick up a flashlight.

After that brief meeting with the Fates, the Paladins meet Crio the Dreamer, their guide. “Do they not want us to help you?” one of the Paladins asks Crio. “No, because you’re saving us,” Creo responds. Oh, what’s that on my arms. Those are called GOOSEBUMPS. Creo should lend that lantern to the Fates, though.

Although at this point I am completely invested in this high-intensity documentary of actual events, but I can’t help but notice there hasn’t been much conflict. That is until a fucking troll comes out of the woods and carries off this random peasant. It’s gruesome, hard to watch. Good for the ABC crew to not turn away though. It’s just so much more gritty that way. My condolences go out to that peasant’s family. They happen so fast, troll attacks.

Luckily, the Paladins make it to the safety of the appropriately named Caste Sanctum. BUT ALL IS NOT WHAT IT SEEMS. They are immediately taken into custody by the guards, who answer to someone named “The Grand Vizier.” Oh, I don’t like the sound of him. Paladin Bonnie puts it perfectly: “Here we are, chosen by the fates to protect Everealm, and this guy treats us like common prisoners. Just…so true Paladin Bonnie.

Anyway, hours later, The Grand Vizier finally shows up himself and boy was I right about him. The guy swishes his cloak a whole ton which, in my experience, is a sign of a bad dude. I didn’t even mention the eye-liner.

Despite the Vizier being a general cloak-swishing douchebag, he releases the Paladins to their sleeping arrangements in the castle after they reveal they have the peices of the Sunspear (another win for the Sunspear, high five!) Because of the unequal ratio of male paladins to female paladins, one of the rooms has to be co-ed. As these people are literally saviors, I’m sure they have enjoyed many sexual partners and this should not be a problem going forward.

The next day they are awoken by Ansgar, the knight in charge of training them. He guides them to their first challenge, which consists of teams of three firing arrows into a scarecrow army. (Um, hello Ansgar, do you think Verlox’s forces of darkness are just going to be standing their like scarecrows? Think again, buddy).

The team that includes Paladin Shondo and Paladin Jim quickly became the favorite, mostly because of the following exchange. Paladin Jim: “You’ve got the magic touch with the accuracy and aim.” Paladin Shondo: “THAT”S PIMP JUICE.” I’m not sure what he meant, but God does it sound valiant. In the end, the White Team is triumphant and Paladin Bonnie is awarded the Order of Leadership. Which probably means something, but I was too busy being fucking engaged with this work of art disguised as a reality show to pay attention to small details.

On the flip side, the blue team loses and its three members or forced into yet another challenge. This challenge is…a second archery competition! (What are you trying to tell us, The Quest? Is Verlox’s secret weakness somehow…arrows?!). The forces of evil stand no chances.

Paladin Christian wins this competition, and is exempt from elimination. The rest of the crew must convene and decide who they are going to vote off Everealm between the remaining two Paladins. Tragically, Paladin Katie is voted off due mostly to her utter incompetence in pretty much everything (not going to save Everealm that way, Katie!).

The Fates deem Katie unworthy to continue the quest, and tell her to “go to her fate.” I’m expecting a dramatic walk-off like in most reality shows, but instead Katie fucking bursts into smoke and disappears. Did ABC just murder someone on television? Wow. The stakes have been raised. I know I, and hopefully the rest of the world, will be tuning in next week. Or else ABC will kill you. 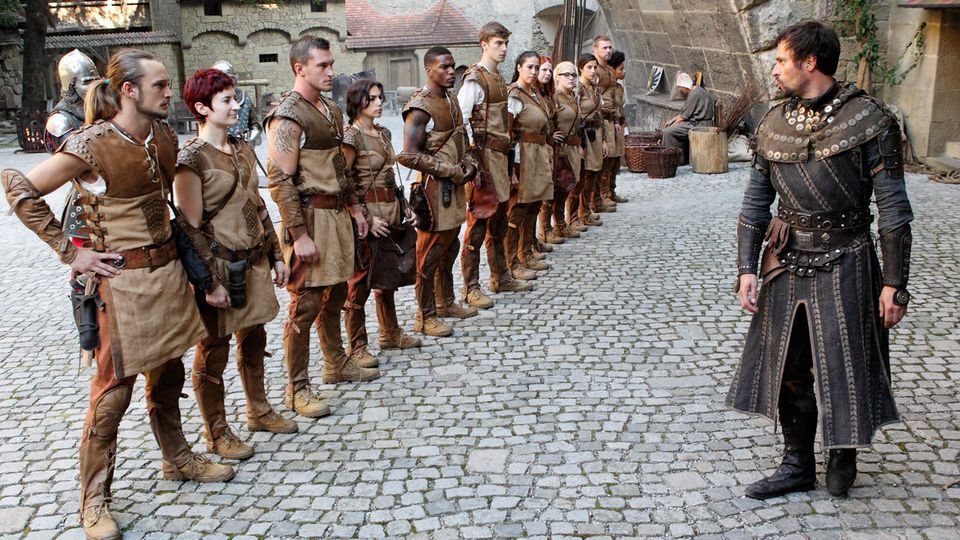 Filed Under: TV, ABC, The Quest