The only way to properly to binge-and-purge watch: Cram all the terrible television you can into the 30 (give or take) minutes you spend on the elliptical.

I don’t watch reality TV. That doesn’t make me a good person, or at least it’s not like I’m up on my moral high horse, like those assholes who think telling me they “don’t own a TV” somehow elevates their cultural standing. (“Oh, so you only watch HBOGo on your iPad? Very sophisticated, broseph.) But reality TV–and I’m using that term to apply to news networks as well–are hard to watch because it’s a lot of people manufacturing anger and fake confrontations for ratings.

I know, I just blew your mind, but bear with me.

I’m conflicted about The Real Housewives franchise as a genre, because on one hand, its very silly and vapid and plays up how ridiculous being a certain type of older woman is. ON THE OTHER HAND: The Real Housewives definitely passes the non-fiction Bechdel test, and there are millions of people who want to watch these “women of a certain age” who are usually invisible in most of pop culture, unless they are playing evil stepmothers or something.

That is…until I caught The Real Housewives of Melbourne on Bravo yesterday afternoon while working on my core.

It turns out that Real Housewives of Melbourne, or RHOM, is the Twin Peaks of reality television. These women may be forced into the same pre-baked formula–fake outrage! Wine throwing! Diamonds!–but because Australia insane, their version of “reality” involves Angels and pyschics and demons and a woman who is definitely having an affair with her hot, simple stepson.
[protected-iframe id=”834c7e6f91ce99943b4a1fe5ed9fc53e-35584880-35147716″ info=”//www.dailymotion.com/embed/video/x1kafma” width=”480″ height=”270″ frameborder=”0″]
The Real Housewives Of Melbourne Preview Clip by AllAboutTheTea
So far, the drama all revolves around Jackie Gillies, a psychic who is married to the drama of Silverchair, and Gina Liano, who is a barrister. One of them believes that she can communicate with angels, specifically angels who like to gossip about whose husband is having an affair. Gina believes that she is a “realist.” Both women are very mistaken. At one point, Jackie claims that she has summoned one lady’s grandmother back from the dead as a demon, and the lady (I forget which) yells, “Don’t you call my grandmother a demonic force!!” It’s like a soap opera on steroids.

Another lady decides to “melt” her bad vibes from her jewelry by making it into one giant lump of gold. Another lady tries on this sheer dress in front of her stepson, who doesn’t know what the word “faux” means. “It’s vinyl,” she assures him, right before they cut to the confessional where she talks about his wang.

I don’t know if all the Housewives shows have gotten this nuts: I know Sonja is auditioning dog psychics on RHONY and Aviva threw a leg, etc., etc. But in all the other incarnations, the insanity is so calculated and manufactored that it feels inauthentic. So far on RHOM, these women seem legit. That lady does believe she’s a psychic. That other lady does want to get all Cersei Lannister up in this piece. Maybe it’s the accents, but I found myself really falling in love with these ladies. A+++ Would watch again. 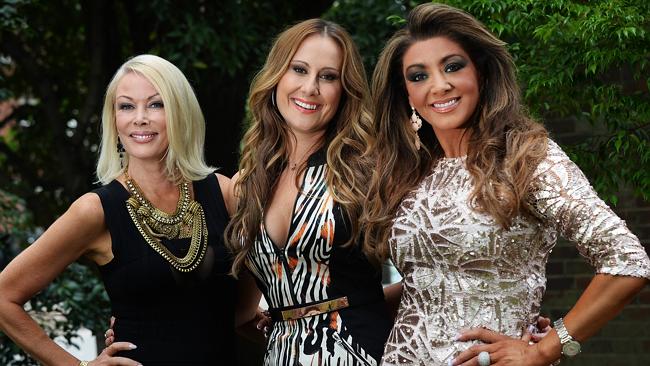