On my first day at Money magazine in January 2001, this guy I kinda knew named Scott Medintz was assigned to walk me around the office and introduce me. Everyone had these large offices with a window and I couldn’t believe how many staffers there were as we awkwardly made our “this is so-and-so, he edits the mutual fund section” small talk that is the most excruciating part of a first day. Scott was from one town over from where I grew up in Chicago and when we got to one guy’s office, he said, “This one will be easy – he’s our age and from our ‘hood.”

Jim Frederick was a couple years younger than me and super tall and almost comically handsome – like sandy blond hair with piercing grey-blue eyes and this prominent patrician chin. The only thing Jim had on his annoyingly clean desk was an issue of The Baffler – not the current one but one from a few years earlier that had run a gigantic story about what an asshole I am. It was obvious that he had remembered the piece and dug out his copy to refresh his memory about his new co-worker. We became fast friends. On my last day at Money, Jim took me to lunch at the fancy restaurant across the street in Rock Plaza. He told me he was proud of me.

After I left Money, we stayed in touch. Jim went to Time to pursue his intense interest in foreign reporting, especially war reporting. They stationed him in Japan and he wrote a crazy book and called me to ask me about co-writing books, as the reason I left was to co-write a book with Rudy Giuliani. I told him it’s awesome, you make tons of bucks and the other guy has to do all the publicity and stuff and if the book sucks no one blames you, they blame the “star.” I asked him who he’d be writing with, assuming it was some famous politician or business figure.

He told me it was about a guy who deserted the US Army and walked to North Korea where they tortured him in jail for 40 years. I told him, Jesus, Frederick, the point here is to sell a few books. He didn’t care. That’s the kind of journalist he was – his job was to tell stories and goddamn, could he tell a story.

And then Jim went on to write the single best book ever written about the war in Iraq and one of the greatest war books ever.

Black Hearts: One Platoon’s Descent into Madness in Iraq’s Triangle of Death is Jim’s masterpiece. It’s a tour de force of immersive reporting in one of the most dangerous places our country has ever done battle. The sensitivity and humanity Jim brought to a story where both were hard to spot make this a perfect book, and his writing is just so powerful.

He also wanted to sell a few books that time. He contacted me about getting it attention. You could feel how reluctant he was to ask even an old buddy for help with the grubby business of commerce, but for the sake of the story, he did so. Here’s what he wrote to me at the end of 2009, after the usual “how you been” stuff:

“So I was wondering if you knew who the right person to speak to at Esquire would be, either about a review or serial rights? I think the story would be up their alley in a lot of ways. Or, as a top-shelf author yourself, if you had any tips, tricks or advice to get the message out there? I really believe this book is the real deal. I am attaching our first review (a starred Kirkus) and I am, quite frankly, interested in making sure the book gets at least a fair look from all similar parties.”

I wrote back to him, “I am proud to know you and grateful that you’ve done the world the service of providing this reportage. Can’t wait to read it, and I mean that.” A couple weeks later, in March 2010, I wrote to him again. “I have now completed it. Thunderstruck by how powerful it is.” And a bunch more about the book.

“Thanks very much for your email. You have no idea how much it means to me. I will save and keep this email forever. I am glad you think it is a good book. That means a lot to me, and if it conveyed a lot of powerful and conflicting emotion, then the book was successful and I am hugely gratifying. It has easily been one of the profoundest, if not the profoundest experiences of my life.

“I would love to stay in touch, be better friends! I chalk it almost entirely up to the fact that until last summer I lived abroad! Let’s get together more now!”

Then some private stuff and then the core of what it means to be a war correspondent and one who just happens to write like an angel.

“I wrote a very serious, deeply researched book—I wanted to say something serious about this war and war in general—and the thing is, I think I achieved it. I just don’t know if there is a critical ecosystem that can launch books like mine anymore. Maybe I am a silly little naif. I am really fucking proud of the book—and no one can take that away from me—but I fear this book is going to die unnoticed. But, as you say, maybe there just isn’t market—mass or critical—for books, serious books like this anymore. I don’t know.

“Thanks for your note. If I have just a couple of readers like you (and a couple in the military, whom I have already heard a lot of good response) then that is really satisfying.”

Jim and his lovely wife (and former Time colleague) Charlotte Greensit came out to New Jersey for Shabbos dinner a couple weeks later. They got lost on the walk from the train to my house. I apologized and he told me it was nice to walk around town with his wife. At the book party for Black Hearts, we drank and bullshitted about the old days and I got to see our Money colleagues Scott Medintz and Ellen Stark and Jim was philosophical about the book’s sales — the important thing was that he had written a great book and he knew it.

Last April, Jim came to the Observer to have lunch with me. He was as shocked as I was that I’d been named editor and broke my balls about what the world was coming to. As ever, he was super generous with his time – we hung out for hours reminiscing about the glory days when Money was making $30 million a year and had factcheckers for the factcheckers and a bunch of people on staff who seemed to have no job at all. Then he visited the office and hung out with our media reporter Kara Smoke and dished about the industry.

A couple months later, Jim and Charlotte held a bon voyage party for themselves. They were visiting England, her home and a great opportunity for him to continue telling stories from faraway places, before they returned to America.

Today, Ellen sent me a Facebook message that Jim had died. I couldn’t believe it. Neither could Ellen. It just doesn’t seem possible. This was a guy with more vitality than anyone, a lover of life, a total stud. Cardiac arrest in San Francisco. At 42. That’s just…not fair. It’s not right.

If you say a prayer tonight, say one for Jim. Say one for Charlotte. Say one for the stories that won’t be told because this very good man left this earth way too early. 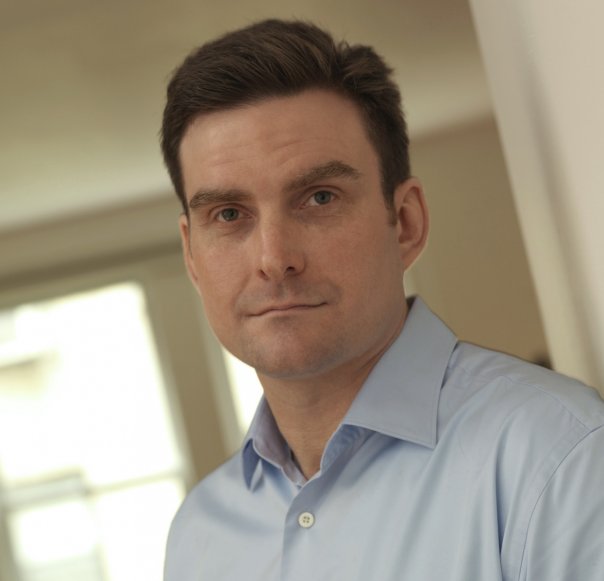