The letter that was distributed to residents of 941 Intervale
(Photo: Picture the Homeless)

Last week, the Village Voice reported that residents of 941 Intervale Avenue in the Bronx had been informed by a brusque, scantily-worded letter that Aguila Inc. will no longer be operating their building as a city-subsidized homeless shelter and that, “over the coming weeks and months,” the residents will be forced to leave their homes.

Over a week later, and the forty families that inhabit the building still haven’t been told more. A few representatives from the Department of Homeless Services (DHS) appeared and instructed them not to leave the building, but have yet to be seen again. The caseworkers have left. The overnight security shift stopped. Residents are unsure when they will be forced to leave, or where they will be taken. The rug has, quite literally, been pulled out from under their feet and no one has explained to them why.

Sam Miller, who works with Picture the Homeless, suspects that the eviction notice is financially motivated. The building is part of the controversial cluster-site housing program, in which the government pays landlords on average $3,000 a month to house homeless families–far above the market value. Aguila, which operates 18 buildings in the Bronx, is one of the main beneficiaries of the program, which from its initial conception has been tarnished by fierce and sustained accusations of scandal.

Many argue that the scheme has acted as a veritable goldmine for landlords, who have made millions by capitalizing off New York’s perpetual problem of homelessness. In December 2013, New York exposed the shady activities of the Podolsky family, who owned close to 40 shelter properties and, since 2010, had generated rents close to $90 million. In 2011, Aguila itself was the subject of a scandalous audit which revealed that, despite the fact that Aguila-operated sites had more than 1,700 open code violations, it had been paid more than $10.3 million by the city for services rendered without a formal contract. Furthermore, a 2013 audit noted that as payments to Aguila increased by 23% from 2011 to 2013, “direct payments to Aguila increased $11.7 million to $39.1 million.”

For Mr. Miller, Aguila’s eviction notice came suspiciously close to Mayor de Blasio’s recent proposition to cut the rent the city pays landlords by about 10 percent. “Aguila is not the only shelter who is not happy,” he said. “Their contract is until 2015, but rumor has it that they are pulling out entirely. Our analysis is that it is getting worse and this will continue to happen.”

At Intervale 941, it is not being asked to move that frustrates the residents–many of whom have been living in the shelter system for years and have become accustomed to moving around–but the undignified manner in which they are being treated. They are offended by the total lack of communication. That their lives, and their problems, appear to represent nothing more than numbers to those who are responsible for helping them.

It is the crippling sense of helplessness that angers Antionette, who lives in the building. “We know nothing,” she stated flatly. “No one is telling us anything. The caseworkers just left and all our information is locked in the office–our social security numbers, our paperwork.”

For the homeless residents of 941 Intervale, their documents are of essential importance. Without access to them they cannot sign leases, or move into permanent housing. They are stuck. Tucked away in the corner of the dark, stale lobby, does remain a security guard. Pasted on the wall above his desk is a peeling notice announcing the impending arrival of Pest Control.

Cautiously reticent, the guard, who asked not to be named, half-heartedly claimed to the Observer to know nothing about the situation. However, soon he began to relent. Confirming he was an employee of Aguila Inc., he stated that he has worked at two of their buildings. “This one is the nicest,” he said. “It’s the only one with an elevator.”

“No one knows what is going on,” he explained. “But you can try to speak to them,” he shrugged, implying that it would be impossible to get Aguila to talk.

Suana, a resident of 941 Intervale, soon chipped in. “They are probably moving us out because of all the fighting,” she asserted, nodding to the grainy CCTV screen displaying a group of men lining the corridors of one of the upper floors.

“I don’t care. Put me in Brooklyn and I won’t care. I travel an hour for day care every day anyway, ” she said, before adding vehemently, “But I’m not moving after school starts. I won’t go then. You’ll have to force me.”

The impending start of the school year is a fundamental concern for many of these families, who have fought to get their children into local schools. The prospect of their children being moved, at any time, to an unknown destination, fills both parents and kids with dread.

When the Observer approached two teenage girls who requested anonymity and also reside in the building, they had a lot to say. “People are mad because they don’t know where they’re going, and school is the main concern,” the one girl asserted. “I have been in a shelter lots, and this has never happened.”  She looked at her friend, “The truck will come, and they will take us, at different times, to different places. And there is a community in this building.”

Another resident, Tawana Littele, argued that the main problem is that this situation is just another example of homeless families not being able to progress, of being held back by circumstances over which they have no control. This lack of support, Ms. Littele explained, is all too common. “I’m a firm believer in working and getting off your butt,” she said. “The majority of families here work, look after children and are trying to get out of here. But there is not the support. So what do you do?”

“We have our whole lives here,” she continued as a young mother walked past, shepherding a group of young girls with matching pigtails. “So you can’t just lock up our paperwork and take away our security. Do you just expect us to pack up? To stand in the lobby with all our stuff, our arms full of baby clothes?”

“Will it change? Not if the Mayor does not find a way to touch the lives of the people that need it the most,” she went on to say. “That takes real leadership. What you tell the public and the way that we are living don’t match up. Stop talking and start leading.” 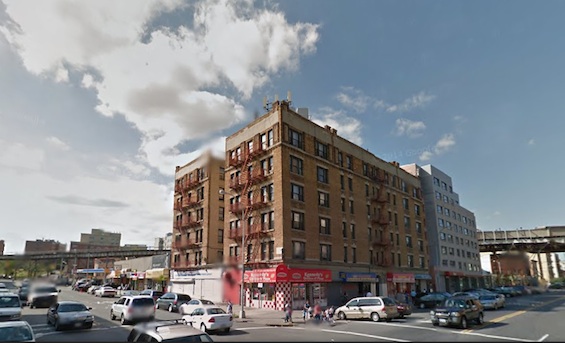