Above an otherwise nondescript Chelsea street bustling with typical city traffic sits a showroom tucked away on the fourth floor. There the celebrated brand of D’Angelico Guitars has come bursting back to life after a half century underground.

In the 1930s and 40s, luthier John D’Angelico hand-crafted guitars in his small shop on Kenmare Street. These guitars became the stuff of legend, attracting players like Barney Kessel and earning the luthier the title “finest builder of archtop guitars.” But D’Angelico worked deliberately and by the time he passed in 1964, he had made fewer than 1200 of the famed hollow-body electrics that bore his name.

The name lived on through obsessive collectors who’d pay up to $100,000 at auctions for the rarely glimpsed beauties and that’s where it stood until a trio of music-lovers-slash-businessmen entered the picture.

CEO Brenden Cohen, President Steve Pisani, and John Ferolito Jr., comprise the new ownership, which bought the brand from John Ferolito Sr., co-founder of Arizona Beverages, who had purchased the brand 17 years ago but not developed it very much.

Renewed popularity of the archtop design coincided with a major 2011 exhibition featuring John D’Angelico at the Metropolitan Museum of Art (Guitar Heroes: Legendary Craftsmen from Italy to New York) and ignited a wave of interest in the brand just as its new owners were working on its relaunch.

Mr. Pisani talked about the “amazing, welcoming response” the relaunch received, which he attributes to the D’Angelico name’s longstanding reputation for excellent quality, which emerged untarnished from the period during which the brand was allowed to languish. About the merchandise, Mr. Pisani said it “takes your breath away. People love the guitars.”

Since its recent resurrection, D’Angelico has attracted a wide following of devoted musicians including John Mayer, Nile Rogers, Robert Randolph, Susan Tedeschi, John Sebastian, and guitar legend and Rock and Roll Hall of Fame inductee Eric Clapton to name a few. Mr. Pisani gloatingly confided that a D’Angelico model is one of the few guitars that Mr. Clapton keeps in his home.

“Our team at D’Angelico promises to build instruments that respect and honor John D’Angelico’s legacy of excellence and carry on the tradition of one of the world’s finest guitar brands,” said CEO Brenden Cohen. The team went to great lengths to recreate the authentic quality of the original instruments. To ensure the accuracy of the recreations, the original models were put through an MRI machine, so the luthiers could see exactly how they were constructed and reverse-engineer forgotten techniques.

Guitars in the $1200 range are manufactured in South Korea while fabrication of the handmade line, which go for up to $12,000, remains in the US, where they are handmade in California. While the latter is geared for the higher-end market, they are good value for the money compared to the original D’Angelico models, which can go for around $50,000 at a Sotheby’s auction.

“Our goal is to have a full line, not only archtops which we are already so famous and well-respected for,” said Mr. Pisani, who added that the company plans to bring out a line of acoustic and solid-body electric rock guitars having already introduced a line of hollow-body bass guitars. The company aims to provide “instruments for every player and at every price point with the common thread of quality,” said Mr. Pisani. While the brand was originally popular among jazz players, it is becoming more and more sought after by country and rock musicians.

Even while the company’s production now spans the globe, the brand remains rooted at home, close to where D’Angelico created his master works. As for the brand’s Chelsea headquarters, Mr. Pisani describes the aesthetic vision from the start as very “Keith Richards’ living room.” Decked out with distressed leather couches, a bar, and a full soundstage with a live streaming video setup, the showroom-cum-lounge is surrounded by an array of amplifiers of all sizes, the walls adorned by a panoply of beautifully lacquered guitars.

The unique space has become something of a Mecca for D’Angelico enthusiasts and guitar fans in general who stop by to see what has become of the storied brand. Located near Madison Square Garden, the showroom attracts many professional musicians who come to check out the latest offerings and often end up leaving as newly satisfied customers.

“We wanted a place for people to be able to play. Especially in New York it’s not easy to do something like that,” said Mr. Pisani, noting that the showroom’s size also allowed them to hold private clinics and performances, which with the comfortable, cozy décor give off the feel of having a live band in a very chic home, if not your own.

It is an unexpectedly magical sanctuary for the true lover of guitars and the music they make. Mr. Pisani, formerly a 30-year veteran at legendary music shop Sam Ash, is certainly one, radiating an intense passion for his products. His eyes light up as he dashes from room to room, showing off his favorites to potential customers and asking them what they think. He all but insists that visitors join him on stage to run through songs on the immaculately tuned instruments and perfectly pitched P.A. Mr. Pisani himself joins and appears to know every Top 40 song from the past five decades by heart.

Gazing at the stunning pieces lining the walls of the D’Angelico Showroom, even the non-player cannot but help feeling awe and perhaps a bit of niggling regret for never having learned. As one of the company’s programmers put it, “being in this store and not knowing how to play is like being in a garage full of Ferraris and not knowing how to drive.” 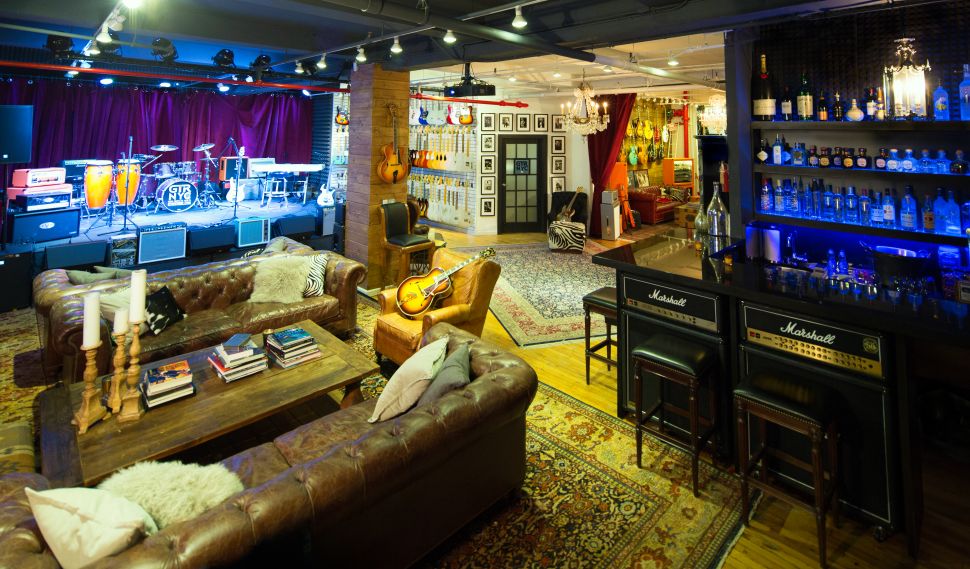