I see what you’re doing here, Running Wild with Bear Grylls, clever bastard. To keep interest peaked, you’re alternating week to week between young, attractive celebrities that can handle themselves with relative ease in the wild and older celebrities that spend their time clinging to a rope on the side of the mountain fearing for their lives. Speaking of “Please Bear don’t let me die,” Tom Arnold ladies and gentleman. The star of 1990s Roseanne joined Bear Grylls this week, and was just as much of a graceful angel as you would expect. But, actually, whoever was in charge of the close captioning for this episode deserves an Emmy for constantly coming up with creative ways to put the sounds of Tom Arnold bashing against rocks again and again into text. Kudos to you!

Here are the most pivotal moments of Bear Grylls and Tom Arnold’s expedition along the Oregon coast. This explains who is flying that helicopter. We have so much to learn from you. I’ll take Things I Don’t Need on a Tuesday Morning for $100, please. This is 90% of Tom Arnold’s dialogue. “I in no way contributed!” lol no he doesn’t. I’m partial to The Stupids myself. “I haven’t washed these since Channing.” If you didn’t catch the subtext, Tom Arnold is old.

Next week on Running Wild with Bear Grylls, the guest adventurer is NBC News correspondent Tamron Hall. I have to admit, I don’t know much about her. That means I’ll actually have to do some homework before writing next week’s recap. Oh boy [grunting worriedly]. 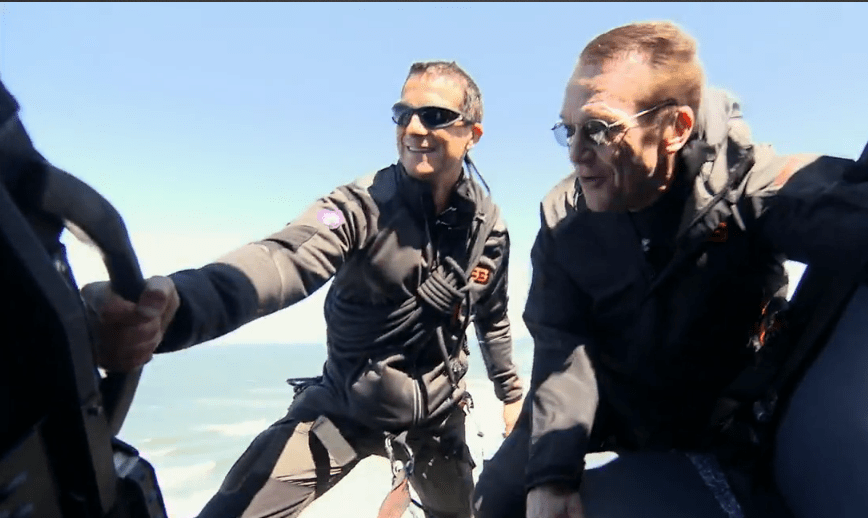