In response to my column charging Russell Brand with Israel-hatred for his disgusting call for a boycott targeting companies doing business with the Jewish state, the comic responded with a lengthy, downright bizarre retort in the Huffington Post, titled “Why I Oppose Anti-Semitism.”

He did not intend to attack Israel. Rather, “like anyone who has spent any time reflecting on this complex issue I naturally wanted to make positive suggestions for positive action. The petition against European businesses provides exactly that opportunity. This is clearly distinct from a boycott against Israel, which means abstaining from buying goods from Israel.”

So instead of positive action for the people of Gaza, like urging Hamas to stop honor killings of women, public executions of gays, mass murder of innocent Palestinians in front of the eyes of the world on bogus charges of collaboration with Israel, and asking Hamas to spend international aid for food and schools for children rather than bombs to murder Jews, ole’ Russ felt that boycotting Israel was the best way forward, which, incidentally, is not a boycott at all. Can’t you all tell the difference between a boycott and a boycott? Geez!

Oh, and here’s the difference. “The obvious reason that this distinction is important is if we are to boycott all nations that practice unsanctioned violence against a weaker opponent we would begin with the UK and USA and include every nation on earth.” He merely proposed a “petition against businesses that profit from the horror in Gaza.”

So, the Israeli violence against Gaza is unsanctioned. Forget the 4-year-old boy murdered by a rocket this past Friday. Forget the Synagogue blown up by a rocket the same day. Forget the hundreds of Israelis blown up in buses, coffee shops, shopping malls, and night clubs over the past few years. Responding to any of this is unsanctioned. Jews must just accept that, unlike any other people on earth, they are born to die. They must submit to murder without any reply. There is nothing they can do to stop it. And if they try, then we must bankrupt them by boycotting them.

But I’m not a Jew-hater.

Methinks ol’ Russ protesteth too much.

Here’s proof, Russell says, that he is not an anti-Semite. “I would not endorse the withdrawal of kosher goods from supermarkets which is happening in Britain, measures like that negatively impact ordinary people who are nothing to do with this extraordinary problem.”

Really, Russell. You would not punish British Jews for Israel’s self-defense against Hamas terror? My, how magnanimous of you.

Here’s another of Russell’s gems: “I don’t see Israeli military action in Gaza as a religious issue. For me it seems to be the action of an extreme right wing government that has strong economic ties to right wing organizations in the US. These affiliations are economic, not theological.”

Translation: It’s not about Jews protecting themselves against terror. It’s about Jews loving money.

Russell’s not done yet: “The insanity across the Middle East is so deeply terrifying and giddyingly futile that most people, despondent and bilious want to look away.” Russell, that insanity, in case you’ve noticed, is not coming from the Jews. It’s coming from Islamist organizations with names like ISIS, Islamic Jihad, Hamas, Al Qaida, and Boko Haram.

Indeed, Russell, the first sign of a true anti-Semite is someone who blames Jews for murder for which they are not responsible. It’s called a blood libel. Look it up.

And he can’t get away from his constant insinuations that Jews will kill for money. We have to condemn, he says, “Extreme transnational crusaders who want to profit … whether in the Middle East or the West.”
Russell, my Jew-hating brother. Why not come and visit Israel so you can apologize. In the Jewish state you will see 1.5 million fully Israeli Arab citizens who enjoy more rights than any country in the Middle East by far.

You will see Ethiopian Jews who were airlifted in the first example in history of Africans being brought to a country to be emancipated rather than enslaved.

Every Friday, you will see tens of thousands of Muslims going up to the Al Aqsa mosque on the Jewish Temple Mount which Israel leaves under Muslim control, even as it remains the holiest Jewish site on planet earth.

You will see women dressed any way they like rather than being forced under a burka at the end of a rifle butt in the infernal Middle East heat.

You will see world-class hospitals with top Arab and Jewish doctors. You will see Arab patients being treated alongside Jewish patients, including the wife of Palestinian Authority President Mahmoud Abbas.
You will see Arab judges given so much latitude in Israeli courts that one of them presided over the sentencing of an Israeli Jewish president.

You will see Arab children frolicking at Mediterranean beaches alongside Jewish children.
You will see Arab merchants in the Old City of Jerusalem selling their wares to tourists from around the world.

And you will see a brave army fighting to stop the terrorists of Hamas and Hezbollah, who subject Palestinians to such tyranny that it is forbidden in Gaza for even a husband and wife to hold hands on a beach.

In that army you will see non-Jewish Druze commanders, including of Israel’s entire super-elite Golani Brigade.

In fact, the only place you will see the war and destruction you speak of is in Gaza where Hamas has implemented a terror regime, forcing Palestinian youth to blow themselves up and become human shields.

In Gaza you will see, as the world has witnessed over the last few days, Palestinians subject to extra-judicial assassinations on trumped-up charges of collaboration. (Note, by the way, that all 18 of these so-called informers—including the two executed women—were “civilians.”)

And you will see Palestinian UN schools turned into rocket launching pads so that children can die as a PR exercise against Israel.

I will continue to watch your movies, Russell.

But now that I know you’re not just an Israel-hater but a Jew-hater as well, I will never see you the same way again. 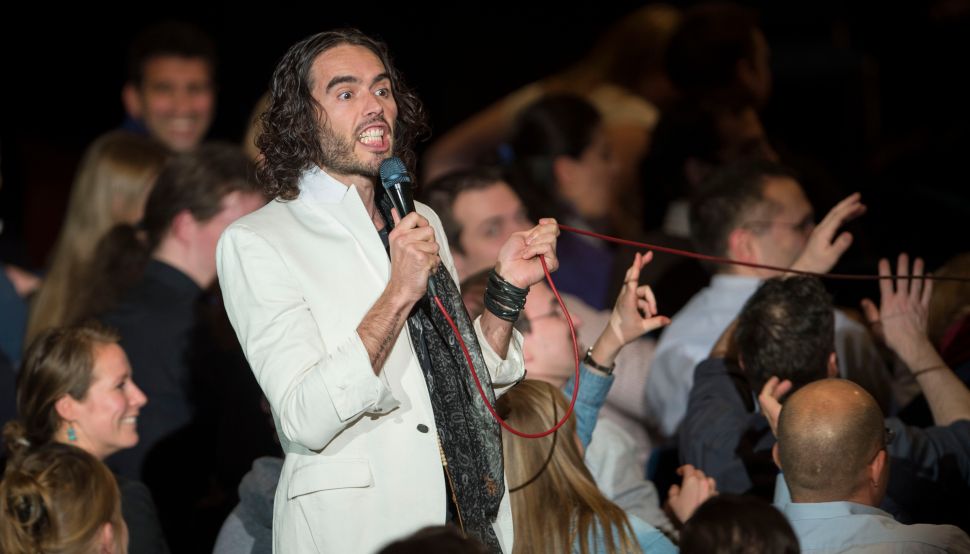