So Russell Brand has joined the league of those demanding a boycott of Israel. I’m going to go soft on him because of all the personal problems he’s had, with multiple addictions, 12 arrests for drug possession, rehab for sexual compulsion, and two arrests for attacking paparazzi taking pictures of him.

A moral beacon he isn’t. A light unto the nations? Fugggetaboutit. And I commend Russell for making no pretensions to being anything other than what he is. A comical, messed up, confused clown. There is something redemptive about his honesty that ought to be commended. Russell Brand belongs to a new, self-declared showbiz genre: the celebrity as moral idiot. And if he has such low expectations for himself, why should we make the mistake of elevating Mr. Brand and his fellow ethical imbeciles by taking him seriously?

But while he makes no pretensions to being an intellectual, there is one thing that Russell does want us to believe: that he is a sensitive humanitarian who cannot sit silently while innocent people suffer. Yes, he may have  SMS’d ex-wife Katy Perry that he’s divorcing her and then never spoke to her again, but that was an anomaly. Most of the time Russell is a bleeding-heart do-gooder.

He does not dislike Israel. He just wants to use his humor to help “displaced persons” in the Middle East. He’s not anti-Jewish and his animus toward Israel has nothing to do with him being British. Rather, he cares about suffering Palestinians. As he should.

But surely, then, his all-feeling heart is going to follow up with ad campaigns against the gassing of Syrian children by Bashar Assad, the wholesale slaughter of Christians by ISIS in Iraq, the persecution of homosexuals in Iran, the dismantling of democracy by Erdogan in Turkey, and the use of human shields by Hamas in Gaza?

Come on, Russell. Show us your sensitive side. Why stop with Israel?

It was his deeply sensitive side that led the gentle comic to call out Fox TV host Sean Hannity as a terrorist:

“One of the definitions of ‘terrorist’ is using intimidation to reach your goals. Who in that situation was behaving like a terrorist, using bullying, intimidation? Sean Hannity. That is where the terrorism is coming from… There’s no objective terrorism, there’s just different perspectives of violence. No one should be using violence, but if you’re going to judge violence pejoratively and negatively, and God knows we all should, then the people that are doing the most and the most effective violence surely are committing the greater crime?”

I know, I know. His logic establishes that he’s not exactly the brightest bulb on the Christmas tree. But surely this too demonstrates his extraordinarily sensitive side? Russell simply wants to stick up for people being picked on. And by this definition every kid who intimidates another child at school is not a bully but a terrorist. And surely Russell would argue that they be given the same punishment as terrorists: drone strikes in school lunchrooms, waterboarding at the swim meet, life detention after school.

In seeing Russell refer to Palestinians as displaced persons in the Middle East, one wonders if he knows anything whatsoever about what made the Palestinians displaced. Does he know that the Arabs rejected the Peel Commission of 1936, the UN Partition of 1947, the Israeli offer for returned conquered territories of 1967, or the Clinton-Arafat-Barak deal of 2000, any one of which would have given the Palestinians a state? Is he aware that Israel absorbed, as just one example, up to a million Jews who were chased out of Arab countries after its founding? Did he ever ask himself, “If one tiny Jewish state can absorb millions of Jewish refugees, how many refugees could the 22 Arab nations absord, since they total 60 times the territory of Israel?” So why do they purposely leave Palestinians in refugee camps?

Two possibilities, Russell, which even someone with your fried circuits could figure out. One, they don’t have enough space. Two, they don’t give a damn about Palestinians except as a moral cudgel with which to browbeat Israel.

But what one really learns from Russell’s diatribe against Israel is the old truth that taking Hollywood celebrities seriously about anything other than pretending to be someone else is perilous. True, there are exceptions. There are serious humanitarians, Sean Penn, whom my organization honored this past May, being a prime example. But Russell Brand, and his tired form of radical chic, is the rule that undermines the exception. 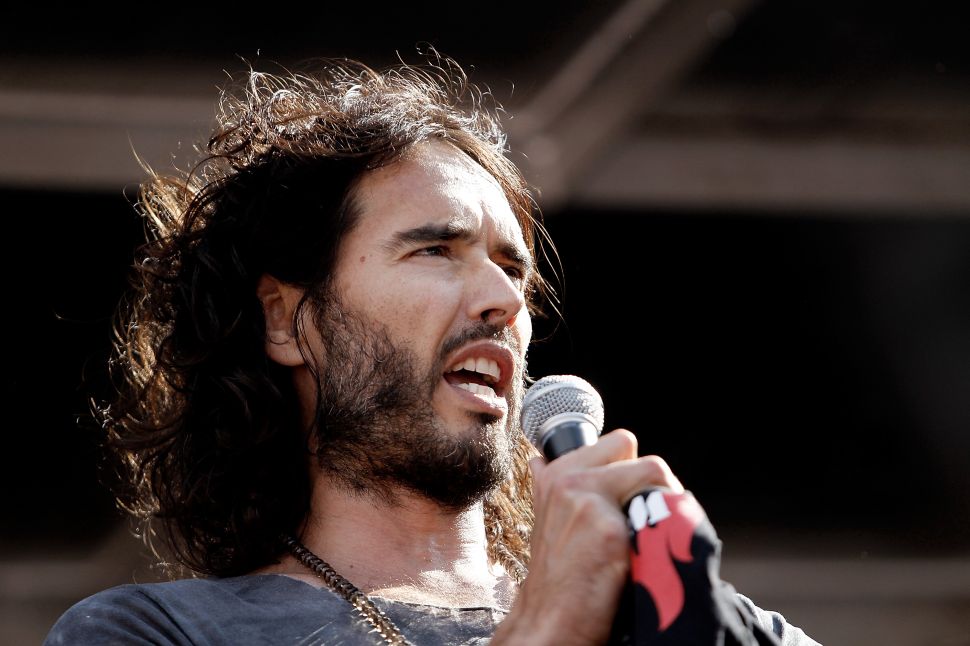