Senator Charles Schumer is not a fan of Los Angeles’ traffic, Chicago’s buses or Charlotte’s roadways.

That much was made clear this morning as New York’s senior senator pitched the Barclays Center in Brooklyn as the best site for the 2016 Democratic National Convention. As Mr. Schumer, along with many of the city’s elected officials, boosted the borough of Kings, the senator took time to compare Brooklyn to cities that hosted past Democratic conventions, casting the old sites in highly unfavorable light.

“There is no, no, no better place than Brooklyn, New York for the convention,” Mr. Schumer, a Brooklyn native, declared. “To say we don’t have hotel space is a canard. We have better hotel space than any other city and it’s closer to the convention center than it has been in most of the other cities, believe me, I was there, I sat in the traffic in L.A., sat on the buses in Chicago, tried to find my way around Charlotte and all those highways.”

Mr. Schumer also aggressively rejected suggestions that New York City, situated in a state that is almost guaranteed to vote overwhelmingly for a Democrat in 2016, shouldn’t have a convention center because it’s not one of the key battlegrounds that will determine the next president of the United States. “We are appealing–you win elections these days by appealing to voters. The best way to appeal to voters in America, they want a bright future, they want the American dream, symbolized by the lady in our harbor, to burn brightly,” he said.

“There is no place that says the American dream burns brightly better than Brooklyn. Like America, they counted us out but we came back and America’s gonna come back and the convention is gonna symbolize that–that knocks anything that Pennsylvania, Ohio or Arizona [has],” Mr. Schumer added.

Members of the Democratic National Committee’s Technical Advisory Group will be in the city the next few days to hear Mayor Bill de Blasio’s Brooklyn pitch. The mayor, a stalwart Democrat who is quickly becoming a national figure in liberal circles, is pushing hard for the 2016 convention to come to the Barclays Center, a basketball arena erected in 2012. Former President Bill Clinton and his wife, Hillary Clinton, also reportedly favor a Brooklyn convention (Ms. Clinton, a former New York senator, is a rumored 2016 candidate).

Brooklyn is competing against Phoenix, Philadelphia, Columbus, Ohio and Birmingham, Alabama for the Democratic convention. The city has played host to conventions many times before: Manhattan most recently held the 2004 Republican National Convention and Mr. Clinton accepted his party’s nomination at Madison Square Garden in 1992.

Mr. de Blasio was not on hand to meet the media outside Barclays Center this morning, but high-ranking members of his administration were present. Alicia Glen, the deputy mayor for housing and economic development, extolled the economic value of a convention in Brooklyn, while Peter Ragone, Mr. de Blasio’s senior adviser and a former spokesman for the 2000 Democratic National Convention in Los Angeles, took questions from reporters.

“We have swag on lock down,” Ms. Cumbo said. “A convention anywhere else in the United States of America is just going to be ‘eh.'” 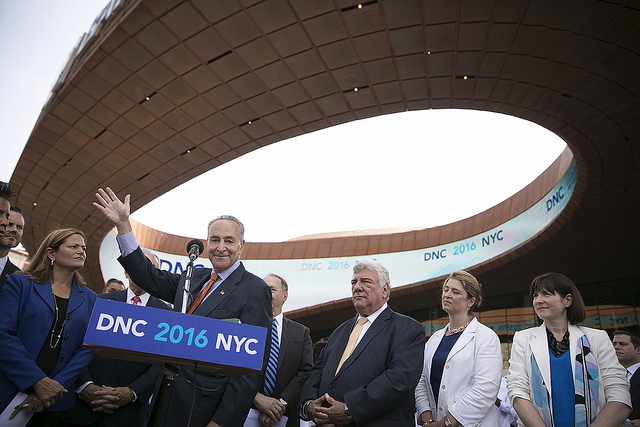