An eerie selfie posted to Reddit has sparked conspiracy theories that the Apple cofounder, who died — er, supposedly? — of pancreatic cancer in 2011 is actually still alive, and living in Brazil. The photo, uploaded by Redditor TheHorseSizedDuck, is captioned, “Steve Jobs is in Rio de Janeiro, alive.” Of course, there are a few major reasons to doubt this is a present-day photo of Mr. Jobs, alive. First of all, there’s no indication of the actual date on which this photo was taken. If it is, in fact, Mr. Jobs, how do we know the photo wasn’t taken five years ago, when he actually was alive? Secondly, Mr. Jobs is dead.

Still, nothing could stop other Redditors from buying into the conspiracy theory, some even going so far as to suggest Mr. Jobs underwent surgery to remove his head and attach it to a different body. As one redditor, MindAlchemist, suggested:

“I honestly believe this theory. Head transplants have been done with animals. Human heads have been reattached with only the spinal cord holding them to the rest of the body.

If he spent a billion dollars to do this, I’m sure it could be done with a decent success rate. It’s just not ethically acceptable, so it wasn’t ever discussed. Steve seems like the kind of guy to do this.

AND all the technology is there except the ability to reattach the spinal cord, which explains the wheelchair and him being a quadriplegic.”

MindAlchemist wasn’t alone; plenty of others took to the comments section to express their belief that Mr. Jobs is still alive:

“It actually does look like an emaciated Steve Jobs. What if this was real and he’s been discovered? Has he been running Apple all this time?”

“The balding patterns, pronounced ears, gangly wrists and hooked nose match. I’ve heard of much crazier rumours than rich people faking their death, so I wouldn’t dismiss it.“

“I was on the fence about Tupac, but god damnit that is Steve mother fackin Jobs.”

Are the theories to be believed? Perhaps redditor writesinlowercase put it best: “steve jobs is dead. using this knowledge, make your own judgement.”

UPDATE: It’s now been proven that this is not — as we suspected — a photo of present-day Steve Jobs. As Valleywag recently uncovered, the man in the background of the Reddit selfie is actually Andy Hahn, a former editor of Sport Fishing magazine who suffers from ALS.

Here’s an excerpt of the message Mr. Hahn sent to Valleywag’s Sam Biddle:

“That photo was taken last Sunday (August 3) afternoon when my aide Luiz and I were strolling/rolling along Avenida Atlantica in Copacabana. Some nut on a skateboard whizzed past us, and Luiz said, ‘I think we were in the photo that guy just took.’

“‘Did you stick out your tongue?’ I asked.

“I have ALS (a debilitating neurological disease), hence the loss of muscle mass and need for a wheelchair. I wear a rigid neck brace because my neck muscles have become too weak to hold up my head.”

Well, there you go — mystery solved. Though we’ll admit, it was fun to entertain the possibility of a Steve Jobs head transplant. 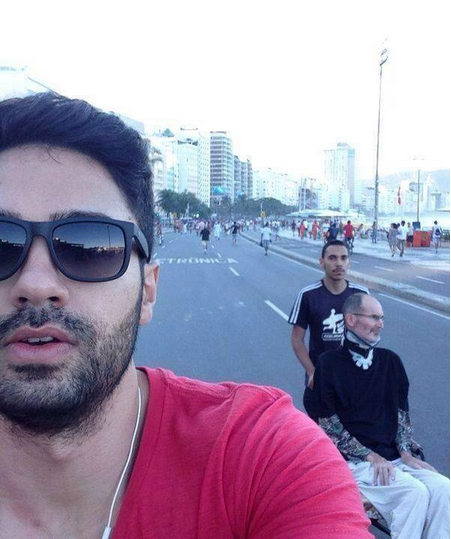