Rev. Al Sharpton fired back at police union officials this morning, slamming their criticism of his meeting with Mayor Bill de Blasio and blasting the idea of a work slowdown in the wake of the medical examiner ruling Eric Garner’s death a homicide.

Mr. Sharpton spoke to the press outside the offices of powerful union 1199 SEIU, and was joined by its president, George Gresham, following a meeting with community leaders. The two announced plans to hold a march across the Verrazano-Narrows Bridge August 23, and both responded to comments made yesterday by Sergeant’s Benevolent Association President Edward Mullins that have been interpreted by some as a call for a work slowdown.

“So going forward, members of the NYPD, we want you to do your job we want you to follow the rule book the way it’s written,” Mr. Mullins said yesterday, “and if there’s a delay in getting to the next place, so be it.”

New York Civil Liberties Union Executive Director Donna Lieberman called on the city not to be intimidated by the police unions.

“To hold New Yorkers hostage to a threatened slowdown for insisting that our police officers obey the law is entirely irresponsible,” she said.

But Wednesday, Mr. Mullins told the Observer his comments are “not a call for a slowdown.”

“What I’m calling for is the cops to protect themselves and do their job exactly the way the patrol guide explains it for them to do,” Mr. Mullins said.

As an example, Mr. Mullins said with NYPD ranks at a historic low, supervisors are often asked to be in several places at once as radio calls come in—including the patrol supervisor in the Garner case, Mr. Mullins said. Her assignment was to be somewhere else, but she went to the Garner scene instead—and if she had followed the rules and been elsewhere, she would have been criticized for it.

The mayor, Mr. Mullins said, has “got a responsibility to make sure that we’re adequately supplied with manpower.”

Still, while he said he wasn’t calling for a slowdown, some have criticized the union’s tone in saying it needed to protect officers, even if it means getting to the next call more slowly.

“We always have to be more concerned with ourselves, because if we don’t take care of ourselves we can’t protect other people,” Mr. Mullins said, citing the rules on an aircraft requiring parents to put on an oxygen mask before children. “If we don’t use caution in taking care of us, how can we help you?”

While Patrolmen Benevolent Association President Patrick Lynch blasted Mr. Sharpton’s presence at a City Hall roundtable, Mr. Sharpton pointed out he’s been hosted by other mayors in the past—including Mayor Michael Bloomberg. Mr. Sharpton tweaked the media for not challenging Mr. Lynch on that point.

“I mean, y’all do have Google—just Google up,” he said. “We’ve been having meetings for a long time.”

He also defended his comments at the roundtable about the mayor’s son, Dante de Blasio, being at risk for a chokehold—pointing to his son’s star turn in a campaign ad about stop-and-frisk.

“Let me get this right—you can say that to get votes, but I can’t say that for the reasons we voted for you? Again, do ya’ll have Google? His son said it,” Mr. Sharpton said.

But Mr. Sharpton repeatedly said he was less concerned with the remarks of union leaders than he was with police policy—echoing Mr. de Blasio’s tone on the matter and taking credit for the mayor’s election.

“We change laws and win elections—we don’t worry about people talking,” he said.

And he wasn’t worried that talk would make it difficult to achieve the policy changes he’s seeking, which he said would move through the City Council, mayor and police commissioner—and which police would have to enforce.

“We have the right to advocate and we won the election. Most of the guys talking are the guys that said we were wrong on stop-and-frisk—how can you be afraid of people you already beat?” Mr. Sharpton asked. “I think that the police have to follow through, or they will no longer be on the department, you cannot decide your’e not gong to follow the orders of the commissioner. It is the law.” 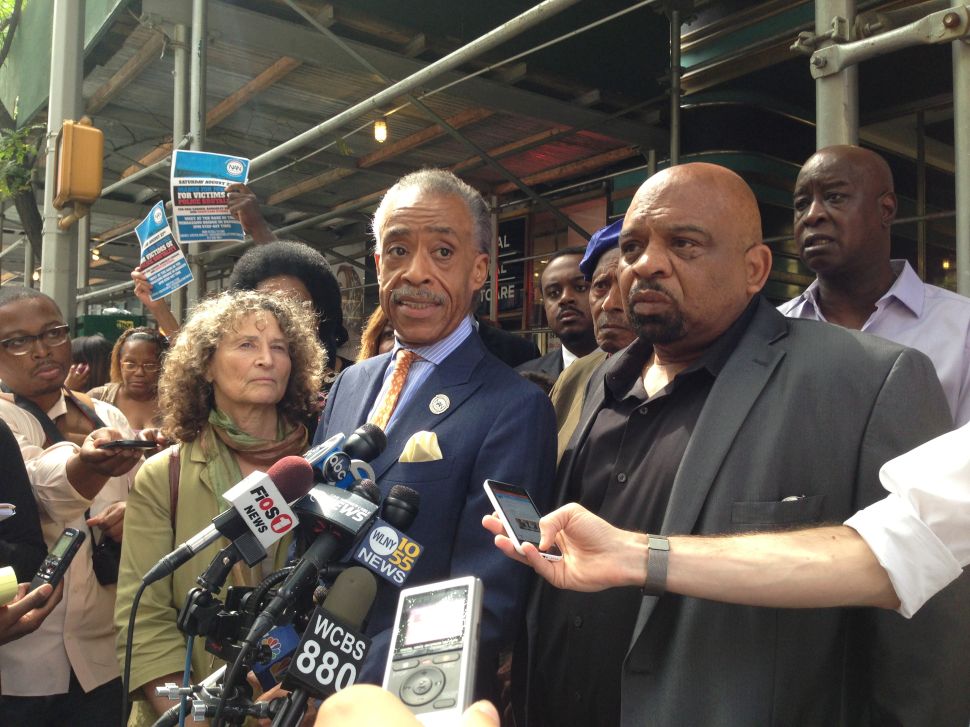