Ms. Higbea once told Shindigger that gossip does nobody one ounce of good. Our third-grade teacher was correct, of course, but what fun is playing nice? As the world is consumed by violence, economic meltdowns and environmental calamities, toxic rumors flood rosé-drenched social gatherings, especially out in the Hamptons. Shindigger went on the hunt for juicy chinwag in the land where publicity is eschewed for closed-door, old school elitism.

Alas, our Jitney was exceedingly late, and forced us to leave Marlo Thomas all by her lonesome with a bottle of Champagne at The Baker House. Over the phone, she told us about Guild Hall’s stage production of Clever Little Lies, of which she is the star.

“It’s a very personal story about love and family and mistakes and lies,” she began, as Shindigger sweated through the final minutes of his journey. “It’s an awesome ride. There are all these twists and turns, and you never know what really happened in the end.”

In the play, Ms. Thomas’ character, Alice, after the birth of a grandchild, senses a rift in her adulterous son’s marriage. She attempts to salvage the romance by bringing them to her house, and a series of often-humorous arguments ensues, as secrets are uncovered.

“She’s a fierce family matriarch,” Ms. Thomas continued. “She’s going to keep her family together, and she’s willing to sacrifice herself. I understand that. I’d throw myself in front of a truck for someone I love.”

Her biggest challenge is to do it fresh every night. “That’s the excitement of live theatre,” she giggled. “It’s a tremendous amount of fun, and this is such a terrific community. Everybody knows everybody else.”

A few hours later, Shindigger landed at Disaronno’s invite-only “Summer Camp” at the Hotel Capri in Southampton. (Truth be told, “hotel” is a little misleading. It was a lovely stay, but feel free to exchange an “m” for that “h.”) Throughout the weekend, we sipped cocktails poolside, swayed to the tunes of DJs May Kwok and Lawrence Lee, watched artist Jeremy Penn paint on-site and even enjoyed morning yoga next to Oscar-winning director Paul Haggis.

“I was at 75 Main for a drink and dinner,” recounted one notable reclining on a chaise lounge who asked not be named. “Four girls were super angry. I thought there was going to be a fight. I sat down with them and got the story. There were these triplets, and the third twin had just gotten caught having an affair. Apparently the man she was sleeping with had just gotten an iPad for his son and accidentally synced her iMessage account with the iPad, so all their text messages were coming through to the kid.”

“I’m like Rambo: you put me in a situation, I prevail,” Mr. Isidori bellowed about the late arrival of burgers due to yet another delayed Jitney. “A couple of secrets that I can’t reveal, but just think BBQ sauce. At Chalk Point Kitchen we cure our pork bellies for 30 days, and then we smoke them and slice them thick.”

Not bad with a Disaronno Sour or five, or so this vegan was told. (We opted for the cook’s kimchi).

At Russell and Danny Simmons’ 15th Annual Art for Life gala at Fairview Farms in Watermill, we ran into Gayle King and attempted to extract some scuttlebutt. “No  scenarios I can elaborate on!” Ms. King demurred, shifting her lime Naeem Khan outfit. “But I know some stuff. You’ve heard it too. I try to be a good girl.”

“I’m a big supporter of Russell,” declared Reverend Al Sharpton, fresh from a rally in Harlem against police brutality. “The Hamptons is not my style. But Russell Simmons is. He’s not only sincere, he’s consistent. He’s involved for the long run.” The evening raised millions for the Rush Foundation’s arts education and gallery programs, which serve nearly 3,000 city youths.

“You’ve got some awesome old-school performers here tonight,” we said to Mr. Simmons. “Who’s going to be the best?”

“I’m looking forward to all of our performers tonight, but especially Kurtis Blow, my first artist,” he enthused. “I know every word.”

Afterward guests dined on one of the finest vegan and farm-to-table feasts in recent memory, while the likes of Doug E. Fresh, Mr. Blow and Naughty by Nature took the stage. With everyone still on their feet, hands in the air and a waft of marijuana prevalent, Shindigger hopped into a waiting Escalade for our last event of the weekend, at 1 Oak Southampton.

“Nelly is here to perform tonight!” Ronnie Madras, a partner of the club, yelled to Shindigger as we hoisted our flute of Belle Époque Édition Première Perrier-Jouët. “There’s been a ton of celebrities this year, but the Hamptons are still not a huge celebrity spot. I would love to see more of the Old School Hamptons crowd.”

Obviously he had no idea Marlo Thomas was in town. 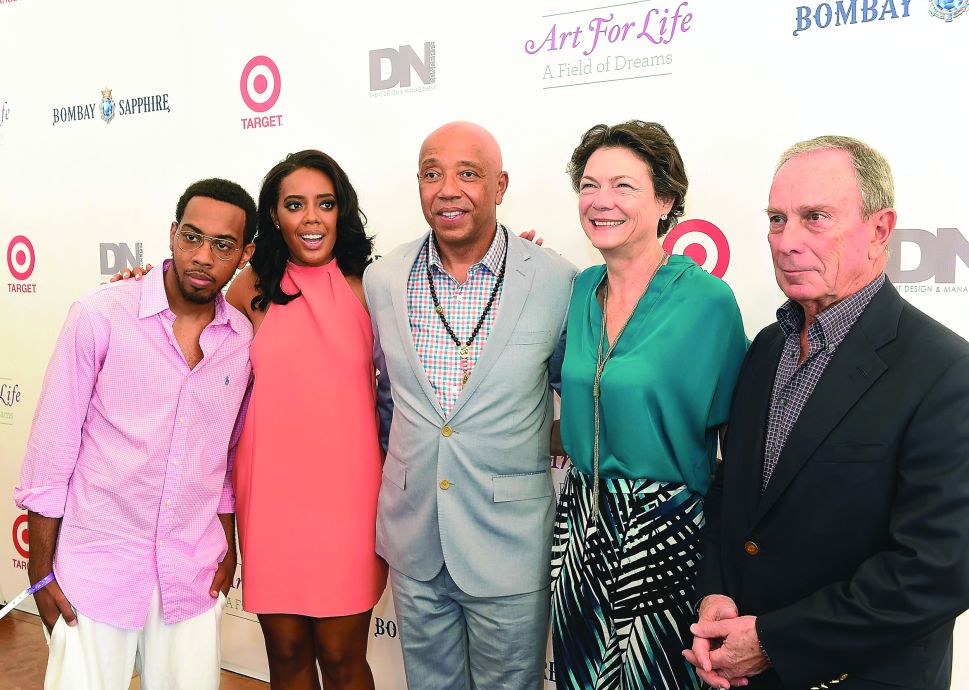