Something the whole family can enjoy.

The 27th floor penthouse at 205 East 59th Street, which recently went on the market for an even $10 million, has the quality of a long-withheld debutante.

Though the 2,700-square-foot floor-through crowns a building completed in 2005, it was first offered for sale only last month, having endured a period of limbo during which a member of the Zucker Organization—the condo’s developer—considered moving in, and a spell as a rental property.

Arriving some nine years late to her coming out party, she still cuts a fetching figure, which, Douglas Elliman listing broker Jacky Teplitzky told the Observer, might as easily lure an overseas prince as empty nesters from New Jersey.

“Foreign buyers?” Ms. Teplitzky asked, in an accent marked heavily by her formative years in Chile and Israel. “Absolutely. Foreign buyers love to brag about their trophy apartments.”

Visitors alighting on the unit’s private landing need little time to discern that the penthouse was never destined to live out her days as anything so common as a rental. A great room 50 feet wide opens from a skylighted foyer, culminating in a south-facing wall of glass overlooking the Midtown skyline. The floors are teak and the fireplace wood-burning. Only one of the apartment’s three bedrooms is without a balcony and the master suite sports two, one the size of a patio.

“This was a building before its time, in a way,” Ms. Teplitzky reflected. “It was one of the first to offer unusual amenities. The others that came later, they copied it.”

On the fifth floor, dogs have the run of things, in a canine playground outfitted with recreational obstacles recalling high-end patio furniture. “The pets can actually exercise,” Ms. Teplitzky enthused. “We call it an exercise park. Otherwise, you have to go to Central Park.”

Certainly, no one wants to do a thing like that, and because the penthouse, despite its age, is being offered as a sponsor unit, buyers have no pesky board approval process to undergo.

“No questions,” Ms. Teplitzky said. “No paperwork, no nothing. You come, you like, you buy.”

The spring cotillion this is not. 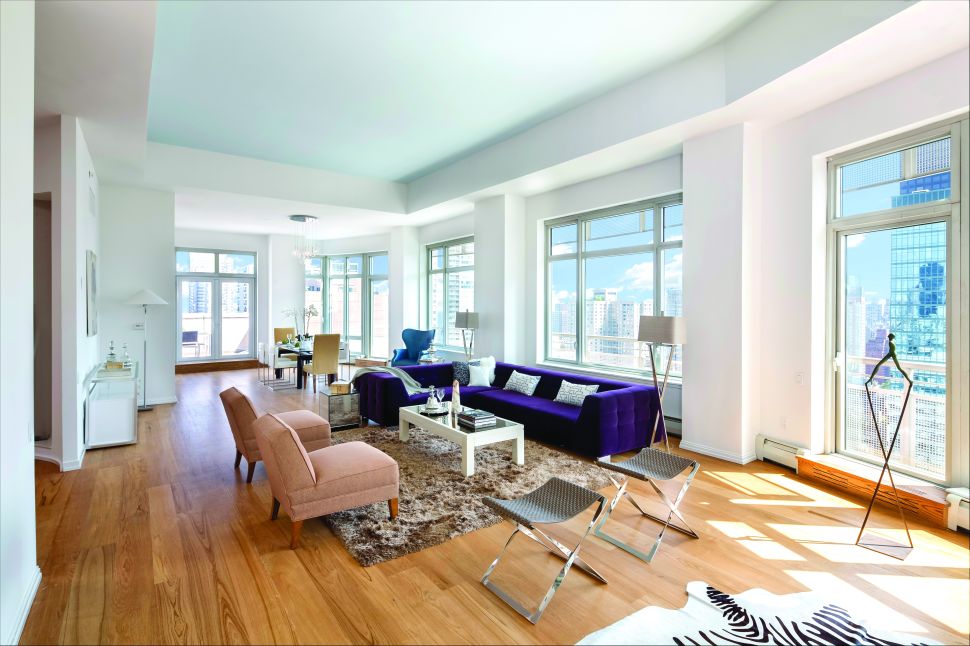